Political debate has turned back to policy, as calls for a spill die out.

With some good polls for the federal government and the release of the Intergenerational Report by Treasurer Joe Hockey we have actually had some hearty policy debate in the media about the structural deficit and in particular how to deal with spiralling health and pension costs and whether superannuation concessions are the best use of taxpayers’ money. But don’t worry, there was also plenty of sniping about the treasurer’s claimed politicisation of the document and many raised eyebrows at the idea of letting first home buyers dip into their super, not to mention lots of coverage of his defamation case against Fairfax.

Industry Minister Ian MacFarlane was easily the biggest mover in the list. He’s had a pretty low profile since the local car makers announced they would be ceasing production in Australia, and there was a fair bit of surprise about his announcement that up to $500 million of support to the manufacturers that had been shut off would be re-opened, although how much of that actually gets used is another matter.

Immigration Minister Peter Dutton got some coverage over a pair of teenagers stopped at Sydney airport, but also more than a few unkind mentions about his role in the GP co-payment that was finally torn up by the government last week.

The continued focus on efforts to save Andrew Chan and Myuran Sukumaran and International Women’s Day coverage moved Opposition Spokesperson for Foreign Affairs Tanya Plibersek up the list, while Communications Minister Malcolm Turnbull moved well down as prospects of a spill anytime soon became faint. 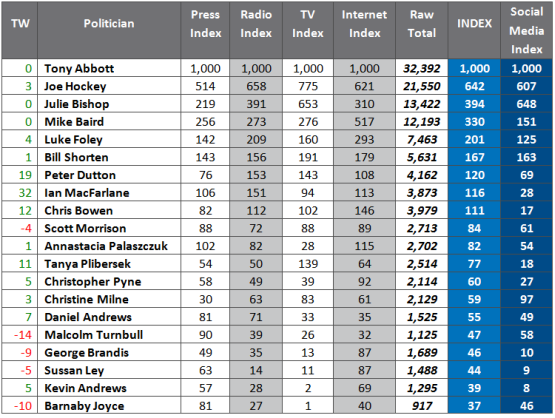 A pretty quiet week on talkback, with Foreign Minister Julie Bishop actually taking top spot as the rights and wrongs of the death penalty and what public stance should be taken with Indonesia continued to receive comment.

Still a massive lead for the PM in terms of social media chatter, although the intergenerational report did create a fair splash – perhaps some people really are willing to try and understand complex long term budgetary issues?

Vale to Sam Simon, the co-creator of The Simpsons, the program that brought animation back as a successful mainstream form of entertainment, and perhaps became one of the most accurate reflections of current American culture.