More claims of sexual harrassment ... a new front for the freedom fight ... and who's that with the chubby cheeks?

Don’t ask, don’t tell. Vascular surgeon and senior lecturer Dr Gabrielle McMullin appeared on the ABC’s 7.30 last night to defend her comments about the culture of silence around sexual harassment in the medical profession, especially among surgeons. Since her original comments on Friday night, in which McMullin said that in some cases it would be better for women to accept unwanted sexual advances than risk their careers by speaking out, there have been many similar accounts of the way in which victims of sexual harrassment are treated in the profession, including this one:

“I, as a Senior doctor advised a Junior doctor to report a sexual assault by a Senior doctor. We went to her superior. It’s your word against his. She backed off. Applied for another job at same hospital recently, never got a look. She should never have complained. Recent permanent appointments at another hospital went to female candidates having sex with married senior doctors in that department. You have absolutely no idea how bad it is. Absolutely disgraceful.”

Refinancing going as planned? Fortescue Metals announced yesterday that Australian businesses should be doing more to close the indigenous pay gap, but one tipster thinks that might be a bit of diversion tactic. Word is that billionaire Twiggy Forrest’s troubled iron ore miner Fortescue Metals was firmly rebuffed in meetings in New York on Friday, where it was seeking to refinance US$2.5 billion in debts, as it announced last week. As the announcement showed, Fortescue is paying substantial interest rates on the loans — the unsecured notes yield up to 8.25% — and is desperate to refinance as bargain-basement iron ore prices drastically undermine cash flow.  Australian banks are decidedly uninterested, hence the need for Fortescue and bankers Credit Suisse to tap expensive overseas debt markets, as in 2012 when Twiggy made an emergency dash to New York to refinance loans from hedge fund Leucadia as a temporary plunge in the iron ore price threatened to put the miner in breach of its loan covenants. Fast-forward three years and Fortescue is back in the same tight spot, only worse this time as the current iron ore price collapse looks anything but temporary. Fortescue is rumoured to be just five months away from breaching its covenants and according to Tips sources, three collateralised loan managers gave Fortescue very poor feedback indeed. “It’s an equity deal now or bond holders take the keys,” says our informant. We asked Fortescue about the claims but didn’t hear back by deadline.

Sponge George Squarepants? It looks like Attorney General George Brandis might be trying to make some new friends at Parliament House by inviting his colleagues to a screening of The Spongebob Movie: Sponge out of Water. While Ms Tips thinks that Spongebob and Patrick’s transformations into muscly superheroes are harder to explain than metadata, it looks like an affair not to be missed. We hope they serve Krabby Patties. 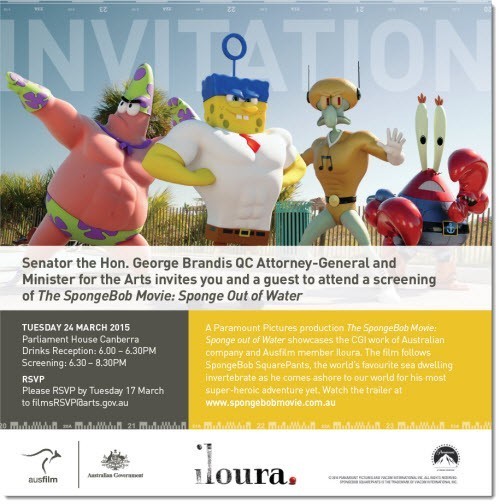 Who’s ‘Harrison’? In an airing of some fascinating dirty linen at Seven Network on Monday, Fairfax columnist Joe Aston has left us all hanging about a mysterious person called “Harrison”.  The item was headlined “Chan innocent party in Seven expenses scandal”, and went on to detail what appears to be a rather acrimonious internal brawl over more than $200,000 of expense claims that were challenged. Aston said Seven “settled with the employee confidentially. [Former Seven COO Nick] Chan knew nothing about the spending, having been cut out of his office’s expense approval process”. The item then went on to detail the tense relations between Seven’s chief financial officers and Chan and Seven Network executives over cost cutting.The item ended somewhat mysteriously: “We attempted unsuccessfully to contact Harrison. Seven refused to comment.” The piece didn’t mention a Harrison until that point, and online it says “We attempted unsuccessfully to contact the employee, who we have chosen not to name”. We hear that it has set off an email storm, starting with the office of chairman and Kerry Stokes extending to other senior executives, including CEO Tim Worner’s office. Stokes has let it be known he is very unhappy with Seven’s internal dealings being aired in public. There was no follow-up item in Aston’s column this morning.

Remember the days of the old schoolyard. Ms Tips has had a long running fascination with pictures of politicians in their younger days, as it can be so revealing to see what they looked like in the days of yore. Luckily for us, one tipster found this photo of Prime Minister Tony Abbott in what he called a “once-a-decade office clean up” over the weekend:

“He’s speaking at an abortion rally at Sydney University during 1979. When I say ‘abortion rally’, it was an SRC event with anti- and pro- speakers. I think  it was in the old Wallace lecture theatre. The story and photos appeared in The Union Recorder, the (more) literary version Honi Soit, put out by the Sydney University Union. During his speech, there was none of the careful avoidance of anything likely to frighten the horses that one hears from his mouth these days; as you can probably tell from his rather more fun-loving expression. And chubby cheeks.” 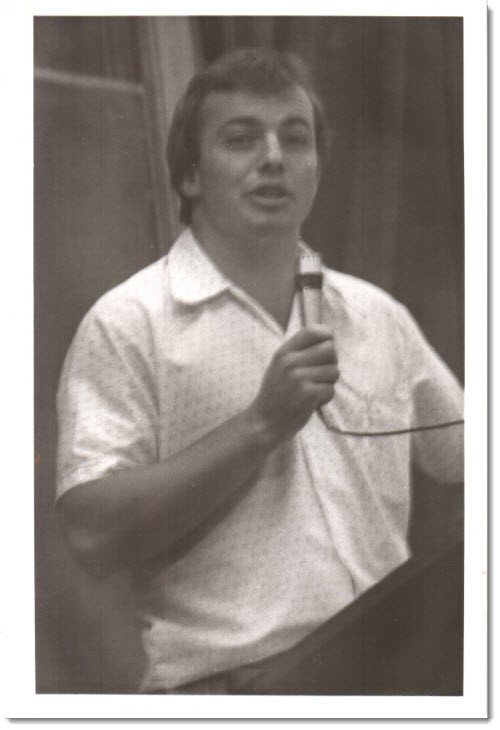 Spaghetti discrimination. If you thought that pastafarians, devotees of the Gordon Church of the Flying Spaghetti Monster, were so 2005, you would be right. But it turns out the religion does have some dedicated followers in Australia, and they are facing discrimination, according to press release that landed in Crikey‘s inbox today:

“Now we also have Preshalin Moodley, a member of the congregation of the Church of the Flying Spaghetti Monster Australia, who appears to be being discriminated against on the basis of his religious beliefs. Preshalin obtained his NSW driver’s license last year, and, at the time, was permitted to wear his religious headwear for his photograph. He has now been informed that he must surrender his present license and have a new photograph taken without his religious headwear, as the Church of the Flying Spaghetti Monster is not a ‘recognised religion’.”

The release features a photo of Moodley’s licence, in which he is wearing a colander on his head, and a letter from Service NSW saying that the photo would need to be re-taken. We wonder what Senator David Leyonhjelm would think about this affront to freedom.

Kiss those lines goodbye. In the canon of unfortunate associations for International Women’s Day lunches, we were alerted to the sponsor of an IWD luncheon in Perth on Friday, where Foreign Minister Julie Bishop was awarded the Most Inspiring Woman of the Year award in the “international” category. The Kiss Violence Against Women Goodbye luncheon, run by Momentum Forum Events, was sponsored by Medaesthetics, a cosmetic surgery company. We hear that some in the room (who actually could) raised their eyebrows at the association and overwhelming branding from the sponsor.

Call a doctor. Yesterday we ran a tip that Dr David van Gend, the head of the Australian Marriage Forum, was not on the register of medical practitioners in Australia, along with his response to our enquiries. We have since been informed that van Gend is registered under his full name Dr Carel David De Ruyter Van Gend — a fact that he chose not to tell us himself when we asked.

Time for institutions to explain their problem with Twiggy

No thoughts on the performance of that Greer idiot?

Re Don’t ask don’t tell: Perhaps the female surgeons who have to submit to married male surgeons in order to advance their career should do a Lisbeth and arrange to have surveillance equipment in the room. Too easy nowadays with an app on a phone or something. My bet is that they’d never have any issues about their career ever again.

So should I require surgery and the surgeon happens to be female, I am to assume she got her job for skills other than her surgical ones?

This is the impression I now have after reading the Press this week.

If women of what must be fairly high calibre feel they cannot speak out against this, what the Hell hope has the young girl in fast food or a supermarket have of not being sexually harrassed at work?

If women of what must be fairly high calibre feel they cannot speak out against this, what the Hell hope has the young girl in fast food or a supermarket have of not being sexually harrassed at work?

Ironically, I expect women in those kinds of jobs are better protected systemically, as the “power gap” is perceived as much larger.