An open letter to the misandrist proletariat

Last Wednesday, Crikey published a tip that the Queensland LNP planned to mark the occasion of International Women’s Day by holding a lunch event at Brisbane’s gentlemen-only Tattersall’s Club. It seemed congratulations were in order.

But then, last Thursday, Crikey published a story, this one by Miss Sally Whyte, effectively criticising the decision to hold the event at Tattersall’s. Miss Sally alleged such clubs inhabit a chauvinistic, “shady world” that “subordinates” indigenous culture and treats women’s lavatorial needs as an “afterthought”.

Junkee also published a sneering polemic, likening Tattersall’s to “your older brother’s treehouse” or a “Julien Blanc TED talk”. I can assure you, there’s not a treehouse in the Anglosphere can match Tattersall’s for culture, tradition and good phalluship … ahem … fellowship. Sorry, bit of a Freudian dick there. My apologies.

In any cock, it’s clear from these examples that a grim scourge has again reared its envious head: elitism. That is, prejudice against the elite, especially moneyed — yet no less vulnerable for it — men.

Elitism is an insidious form of hate that stems from the ongoing elevation of “anarchist culture”, normalised by news media and the entertainment industry. It manifests, for example, in the crude stylings of Jarvis Cocker, the Occupy-Wall-Street mentality of partisan reporters, and even appeals to cannibalism.

The history of the Australian elite is one of struggle. We have fought tirelessly to carve out a humble niche in which to enjoy our modest luxuries, yet have been met with hostility at every turn.

First, it was Pemulwuy and his audacious natives. Then the Bolshevik Peter Garrett and his dreadlock-Kumbaya-grunge-core malcontents. Today, we must contend with an army of frightbats, storming the mahogany ramparts to encroach on our artful conversations.

We’ve long sought refuge from bitter attacks on our hard-earned birthright. But how much longer can we persist? How much longer until our way of life is so trenchantly lampooned that we become a dead-letter people? What price freedom?

Used to be a man could quaff his Grange without fear of inquiry.

Used to be a man could grease the wheels of international business without fear of “watchdogs” or “bribery allegations”.

Yore a man could, if he besought, hitch a ride yonder, atop a spiffy penny-farthing for nary a tuppence — onward to Hampstead! Whereupon the heath, he might espy a comely dame, doff his derby (meaning “tip his hat”, you gutter-minded prole) and, with the wry grin of the epitomic gentleman, think merrily of the fickle tarts prancing about Whitechapel.

But no longer. Thanks, in large part, to insolent vulvarians like Miss Sally. She soaks us in bile, yet sounds very much like someone who would’ve opposed the abrogation of 18C. Why the double standard? Landed gentiles have feelings, too. All the privilege in the world can’t inure one to the invective of an uppity commoner.

Sometimes I reckon to trade it all for a bit of bloody respect. But I why should I have to? And why, ladies, do you attack us, of all people? We men of noble stock, providers of feminine sundries, who cured you of hysteria, nursed you with thalidomide, and vanquished the carbon tax in your honour.

You agitate for change, but smashing the glass ceiling is an inherently dangerous act, requiring great skill and knowledge to undertake successfully. And let me tell you something about glass: of the 8600 Australians employed as glaziers, only 1.3% are women — if you won’t listen to reason, at least listen to statistics!

About the only one of you who took International Women’s Day to make any kind of good sense was the eccentric popstress Pink, who twatted a Twitter, quoting from Ayn Rand’s magnum opus The Fountainhead: 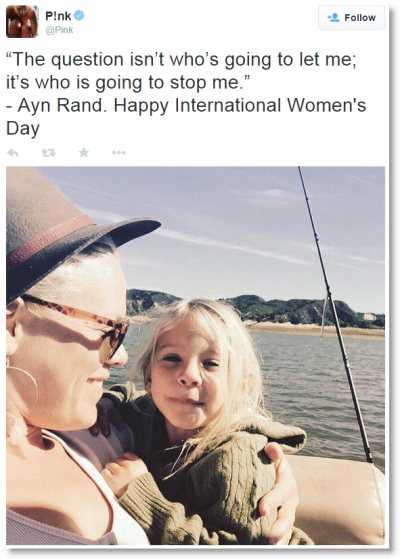 Searing. Right up there with “I don’t believe that any good woman would want [to be president]” and “We should make sausages out of homeless people”. Rand knew. She was forever the target of elitist ne’er-do-wells.

Now, elitism is on the rise again. Something must be done. Gentlemen, we must push back.

I will not beg. It’s not in my blood. Though I will implore and beseech you, my fellow billionaires, just as women took back the night, and Ferguson set fire to perfectly good equity, we must initiate a powerful, symbolic campaign for change and due recognition. I propose an expedition. To Africa! Ready the blunderbusses, lads, it’s time to #huntivory4justice.

Hear, hear, Herbie! Away with these termagants!