Why do we still think cripface is OK?

Disability academic Beth Haller talks about new ways of giving people with disabilities control over their own narratives. And she says help could be coming from quite an unlikely quarter. 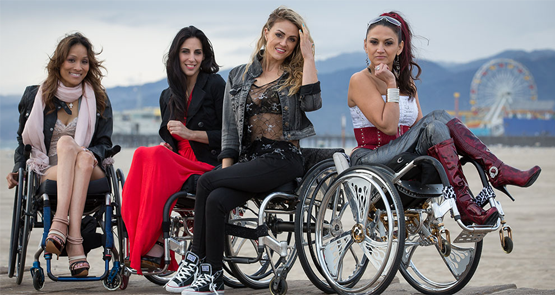 The cast of Push Girls

Chris Lilley and the ABC may refuse to believe it, but blackface is now regarded as beyond the pale. And I look forward to the day when Eddie Redmayne’s Oscar-winning performance as Stephen Hawking in The Theory of Everything is seen as having been as offensive and cringe-worthy as every blackface performance, up to and including Jonah from Tonga.

The issue of “cripface” — the use of able-bodied actors to play disabled characters — has been in the spotlight since Redmayne’s win. An article in The Washington Post noted that since Dustin Hoffman’s Rain Man, a majority of best actor Oscars went to men playing roles in which their characters faced “significant mental or physical barriers to what many consider normal life” — ranging from Colin Firth’s stutter for The King’s Speech to Geoffrey Rush’s mental illness in Shine. Perhaps — perhaps — with this year’s awards, we’ve finally reached Peak Cripface.

So it was an interesting time to interview visiting American academic Beth Haller, author of Representing Disability in an Ableist World: Essays on Mass Media. Haller herself is an “able-bod” (to use a term from the late Stella Young), but her lecture at the Melbourne Social Equity Institute at The University of Melbourne struck a chord with disabled audience members.

Of course, some of the roles cited in the Washington Post article stretch the boundaries of what is usually defined as disability. Andrew Bolt would consign anyone who identified as disabled on the basis of their stutter to the same circle of tabloid hell as those notorious “fair-skinned Aborigines”. Others note that a disabled actor cannot realistically undertake roles such as Stephen Hawking, in which the character transitions from able-bodied to disabled.

But responsibility does not lie only with casting directors. Boyhood is exceptional in using the same group of actors for many years to depict characters transitioning through life stages. We’re used to seeing different actors depict the same character at different life stages, so why not treat the transition to disability in a similar way? And as Haller points out: “With CGI now, you could actually have a disabled person play a non-disabled role.”

However, she regards creative thinking on the part of writers as a more useful way forward. “I interviewed the writers for Switched at Birth — a teen show that features deaf actors. One of the writers said that she appreciates the fact that she can’t fall back on trite narratives. The typical plot where someone overhears something around the corner and that sets events in motion — well, that can’t work when you have all these deaf actors. So you have to come up with something more creative and innovative.”

And according the Haller, the lowbrow genre of reality television is leading the way on creativity and innovation. Her academic colleagues find this hard to believe.

“Why are you bothering with reality TV — it’s all crap! But these are pop culture representations that reach a lot more people than an article in The Australian or The Age or even a TV current affairs show. These are the shows that young people in particular watch and it’s how they get their information about the world. These shows might not be perfect, but they do build awareness among people who might not have ever thought about disability issues before.”

Reality shows featuring disabled participants have proved to be a very popular genre in the United States. Little People, Big World follows the lives of the Roloff family, several of whom are the “little people” of the shows title. Push Girls depicts the lives of a group of young women who are wheelchair users (and by a happy coincidence are also glamorous and attractive by conventional beauty norms).

“The success of shows like Little People, Big World showed producers that if they tried to have a show about people with a physical difference or disability and didn’t let them have control, it would come off as inauthentic. And the term is ‘reality show’. They have to let people with disabilities have power in that particular genre or they won’t give a sense of what people’s lives are actually like. If the producers work in collaboration with people with disabilities, they get a really good show and everybody wins.”

I had hopes of becoming a reality show winner myself — not for the tabloid fame, but as an alternative to dealing with Gary-from-the-council. Gary-from-the-council had visited my home to install the modifications recommended by my occupational therapist in order to accommodate my multiple sclerosis. The OT’s suggestions had seemed pretty modest to me — a rail at the front step and re-hanging the front door. None of this was remotely possible, according to Gary. (“I know you’re home’s your castle, but it’s not very people-friendly, is it? I feel for you, I really do. I guess that you’d better just hope for a cure.”)

But Haller says reality TV won’t be the saviour for people with disabilities in an ableist world. Home-decorating shows have been used by families in the United States who needed modifications to assist disabled family members — but it has not always ended well. In several cases, the reality show didn’t just make the home more accessible, it redecorated to the point of pushing it up into a whole different tax bracket, forcing the family to sell.

“What’s wrong with our society in America when you have to go on a reality show to get the accessibility that you need for your home?”

Sigh. I’ll just continue to deal with Gary-from-the-council then, rather than waiting for the phone call from Channel 9.

When an inspiring biopic is made about my life (hey, it’s only a matter of time), it will be a challenge for the filmmakers to find a suitably Australian-accented actor of Pakistani and Scottish descent living with multiple sclerosis to play the lead role. However, I expect them to do better than to cast Cate Blanchett in brownface, wielding an elegant mobility aide.

Goodbye to my friend Stella, we owe you so much

Would legalising euthanasia diminish the rights of people with disabilities?

What on Earth mad this person think that the word “cripface” was OK to be used in this, or indeed any other, context? What an ugly word! It immediately consigns to the rubbish heap anything it is used to describe. It immediately shuts down any possible discussion of the merits or otherwise of any work of theatre or film.

As a matter of fact, it’s use completely destroyed any value this article might otherwise have had.

On the verge of PC gone mad. We’re talking about *acting*. That is where a person portrays a character, who is usually not themself. A character who may be different from themselves in interests, ethnicity, age, gender, abilities, beliefs, aptitudes, even species. Taking on that challenge is what actors do, by definition. The question is not whether they should do it, but whether it is done with respect, or with malicious intent. If the former, then what is the problem?

To act well requires a lot of time and dedication, but does not usually result in a secure income, which makes it hard work, only suited to those with the vocation for it. Hence, the pool of available faces, body types, voices, etc is actually quite small.The main priority with casting should be to find an actor whose acting and physical characteristics allow the audience to suspend disbelief and identify with the character. And preferably, to stick with the one actor through as much of the character timeline as possible. Sacrificing the rare good fits of persona in order to match disabilities may well make the whole episode rather pointless. Or perverse, since characters are being identified by their disabilities rather than by other features, and hence objectified.

The case of Stephen Hawking in “The Theory of Everything” is a good example. The prime requirement was to have an individual who could be identified as Hawking, over several decades during which he underwent a transformation from fully able-bodied to severely disabled. One actor being able to do that is a brilliant achievement. Having a sequence of six differently-abled actors, looking and sounding nothing like one another, would have reduced the exercise to a farce.

There are currently many much more serious issues affecting opportunities for people with disabilities. Go and tackle them.

Does this mean we’ll soon see an article decrying ‘cis-physicality’?