Australia’s billion-dollar recluse. “Meet Australia’s richest woman,” the headline’s scream, as BRW today unveils its annual list of the 30 richest self-made women in Australia. But you won’t meet her. You won’t even see what she looks like. Vicky Teoh, with a billion-dollar fortune, is with her husband the co-founder and significant owner of TPG, a publicly listed telco whose share price gains have added nearly $200 million to Teoh’s fortune in the past year. But she, and her entire family, are notoriously secretive — none of Australia’s publishers even have a photo of what they look like, which is why most outlets have gone with images of the far more visible Boost Juice founder Janine Allis to illustrate their Rich List stories. In 2013, in what one presumes was desperation at having to append silhouettes to its valuations of the Teohs, BRW sent a snapper to the Teoh residence to try to get some shots. All he got were images of a man hiding his face.

Drowning in letters. The NSW election campaign is chugging along, with one tipster telling us he received a shiny pamphlet from the Liberals (which did identify itself as such) and included information about where to send applications for postal votes. Our tipster made the effort to compare the address provided by the Liberal pamphlet and the Australian Electoral Commission — they’re not the same, of course. Political parties continue to hand out information that offers postal vote forms, but the reply -paid envelopes are sent to party HQ, where the party compiles voter information before handing the votes on to the AEC. Our tipster says:

“My electorate of Granville is one of those that I expect to go back to Labor in 2015.  it has been a Labor held seat since 1938, until the big swing of 2011, when serial Liberal candidate Tony Issa finally got lucky. In this 2015 election, so far, I have received far more material from the Liberal party than from all other parties or candidates combined.”

Pop flops at AGNSW. Unofficial reports are emerging from the NSW Art Gallery that the blockbuster exhibition “Pop to Popism” has been something of a floperoo. Official figures are being tightly held by the gallery’s increasingly besieged bureaucracy, and inquiring journalists are wondering who will produce the final results, how they will be calculated, when will they be released and whether they will be massaged by the inclusion of school visits.

Last year the show’s boosters claimed ticketing would reach about 200,000 — close to what the National Gallery of Victoria (NGV) achieved for its Gaultier show this summer — but it seems likely the final result will be around half that.

The home-curated exhibition has received a very mixed response from media reviewers and attendees. Pop art was essentially a Manhattan graphic arts movement that lent itself to advertising and coffee table books. In general, its practitioners never thought their art was for the walls of major galleries. To drum up public support, the AGNSW production team introduced several novel concepts, the most bizarre being a hot dog stand inside the exhibition selling the excruciating fast food for $15 a pop, and a specially created Warhol-style gelato.

Family doctor not registered. Channel Nine and Channel Seven’s audiences were treated to this ad on Sunday night, where the “Australian Marriage Forum” pleaded with us to think of the children when it comes to the marriage equality debate. SBS pulled the ad, which was due to play during its Mardi Gras coverage, a decision the group said was “outrageous”. The advertisement features Dr David van Gend, listed as a “family doctor”, and other websites refer to him as a GP in Toowoomba. A tipster pointed out to us however that van Gend does not appear on the register of medical practitioners in Australia. We asked the Australian Marriage Forum why that might be, and van Gend responded:

“Of course I am … I am a Qld graduate and a GP for over 20 years in Qld. That is a really pathetic angle, if I might say so. What about going to the substance: do you support laws that will deliberately create motherless and fatherless families?

Democracy is the road to … Ms Tips doesn’t understand much about the American practice of “proms” and “homecomings”, but she understands that they have themes and kings and queens. It seems Ms Tips has much to learn, though, after hearing that seniors at a high school in Albuquerque, New Mexico, have voted for the theme of their upcoming prom to be “communism” — leading to the wonderful portmanteau “prom-unism”. According to a report from KRQE-TV, not everyone is happy about it, with one student saying “I would hope Cottonwood [high school] would realize the seriousness of having a very powerful and destructive idea as the theme for a prom”. The other option was “under the sea” as the prom will take place at the local aquarium. We’re not sure what communism decorations will look like — a hammer and sickle and strict rationing of the snacks and beverages? Everyone dresses up as Marx and Engels? According to the report the executive director of the school will be talking to the students this week about the theme, so the theme of communism might get an ice pick in the back of the head — unless there is a revolution among the students.

Pronunciation and marital status. There are many things we want to know about a new premier when they come to power, and how to spell and pronounce his or her name is one of the biggies. But does it matter how many times they were married or how many unsuccessful IVF attempts they have had? We didn’t think so, but My Weekly Preview magazine on the Sunshine Coast does, including such details in its profile of new Premier Annastacia Palaszczuk. We offer no further comment other than the one left by our helpful tipster: 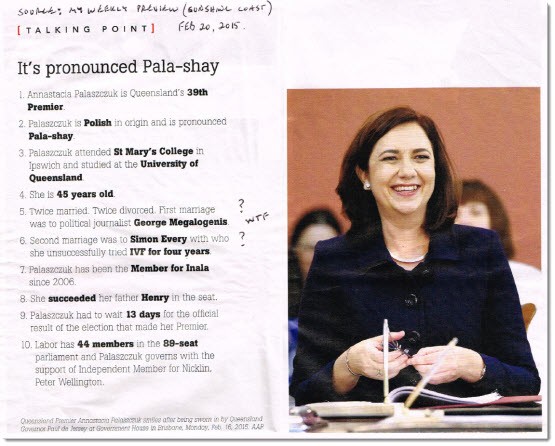 Girls to the front. Yesterday’s International Women’s Day was marked with many different celebrations across the world — but not for Australia’s Minister for Women, Tony Abbott. As covered by BuzzFeed, Abbott attended quite a few events yesterday, but only had time for one Facebook post to mark the day. Senator Michaelia Cash, the Minister Assisting the Prime Minister for Women, is still celebrating International Women’s Day, posting on Facebook that she attended the World YWCA breakfast in New York. Cash seems to take her long-winded title very seriously — even her profile picture is of her standing behind the PM — assisting, we presume.

You might have tried a little harder to find Dr Van Gend on the Medical Practitioner’s register… such as just searching by last name. Which would return the following: http://www.ahpra.gov.au/Registration/Registers-of-Practitioners.aspx?q=MED0001376431&t=bgmCaSDHrWSuYdjYFQww

Whilst I heartily oppose the Australian Marriage Forum’s stance on same-sex marriage, your tip-off re David van Gend is pretty sloppy as anyone who enters just ‘van Gend’ in the register of medical practitioners will find. There is a Dr van Gend of Toowoomba – it’s just that David isn’t listed as his first name (but as his second). I expect better of you.

Queensland takes-out the bigotry award again. What a shock.

Not hard to check!

A very poor effort over all 7 items – was SharriM subbing for Ms Tips?