Politicians love to opine about housing affordability but are unlikely to ever do anything serious about it. 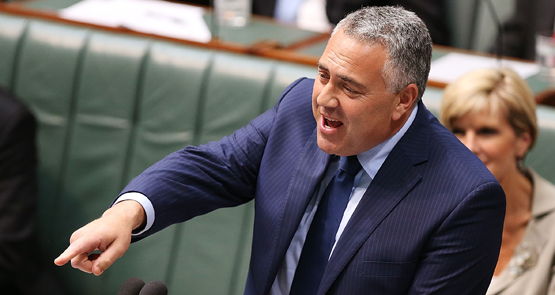 Joe Hockey is in visionary mode at the moment. He wants us to think about some big-picture things — what will our tax base be like in 30 or 40 years? What are are the implications of longer lifespans (Joe’s answer — hey isn’t it cool you’ll have so many more years to work?!) What role should retirement savings policy play in all this — which is a good question given how little we talk about longevity insurance policies in Australia.

Hockey’s motives are mixed of course, but it’s not a bad thing for a Treasurer to try to prompt some blue-sky thinking, even if there’s unlikely to be any discussion of such matters outside newspaper columns. And if it was preparatory to doing something significant on, say, superannuation tax concessions, it would be even better.

But Joe, alas, descended into brain fart territory when he suggested that super might be a worthwhile source of funding for first-home buyers. Putting aside that your average 20-something couple looking for their first home is unlikely to have much in the way of super to call on and women are disadvantaged in super by the gender pay gap and time taken out of the workforce to parent, it’s another in the long list of terrible ideas that ostensibly make life easier for first-home buyers but in fact just pump more money into the housing market without increasing supply.

Fortunately the worst of those policies, the first -home owners’ grant in its various forms, has been ameliorated by the Rudd, O’Farrell and Newman governments by being targeted at new housing stock. But opening up super to home purchasing would replicate the worst aspects of the original policy — it would look like it was designed to help those entering the property market, but its benefits would flow entirely to those already in the property market via higher prices.

Then again, when it comes to Australian housing policy in recent decades, that perfectly describes it: everyone talks a lot about housing affordability and how terrible it is, but our suite of policies is designed to benefit home owners and investors, and no politician will go near those. Improving housing affordability is, after all, another way of telling home owners that the biggest asset they’ll ever own either needs to fall in price or it shouldn’t rise as quickly in value as it has.

But just to illustrate Hockey doesn’t have a monopoly on embarrassing brain explosions, NSW state Labor leader Luke Foley yesterday plucked another idea out of his, erm, arsenal of policies by saying he wants to look at allowing stamp duty to be paid off by first-home buyers over five years.

Whether Foley had bothered to check the impact of rephasing the circa $5 billion per annum in revenue the NSW government gets from stamp duty on his budget isn’t clear, and it doesn’t matter a great deal since he’ll likely lead Labor to a richly deserved flogging on March 28.

Stamp duty doesn’t need rephasing — it needs phasing out altogether. As the Henry tax review explained, it is a rotten, highly damaging tax that discourages people from responding to changing housing requirements over the course of their lives. It should be replaced with a land tax aimed at the value of land, not at property transactions. But the only government that has tried this is the ACT government, which only narrowly survived a disgraceful, and completely deceitful, scare campaign from the ACT Liberals at the last election on the issue.

And don’t forget, while Hockey is talking ethereally of super going into housing, he’s leading Tony Abbott’s save-my-leadership campaign against foreign investment in housing, most of which flows into new housing stock and not existing property.

Politicians at the state and federal level love to talk about doing something to improve housing affordability. Very few are willing to take the steps necessary to do something about it — invest in the suburban infrastructure that will encourage development, give developers more certainty from planning approval processes, start skewing our tax system away from the settings that so strongly favour home owners in a more neutral direction, building more social housing for low-income earners (across Australia, the number of publicly funded dwelling approvals fell by a quarter on 2013).

And once upon a time, housing affordability was a major item on the Council of Australian Governments’ agenda, until it sort of slipped off in the later Labor years. The only person who ever lamented its disappearance was Joe Hockey. But that was another time.

Super for housing: the latest example of our war on the young

Using Super for housing is not so stupid:

I am, very definitely, going insane I’ve decided. Or I’m extraordinarily economically thick. So I’d appreciate if someone could explain how tinkering in any way with supply (including costs like stamp duty) is going to change this fundamental demand-side problem:

Pre-1984 the first three markets worked in parallel and overlap reasonably stably and accessibly, because all three competing demands – and of course bidders generally fell into at least two of the three demand categories – remained fundamentally grounded in the house’s intrinsic worth, in a broadly interlocked and stable way.

But since 1984 the accumulating suite of tax reduction incentives has changed the fundamental nature of what investors now bid for. They’re not just bidding for a house as renter and/or capital gainer.

They’re bidding for a house (as renter/CGer) PLUS the house as a tax cut from their fellow taxpayer. It makes auctions unavoidably loaded. If I win the auction as an investor, whatever the price paid (up until now, at least) the same product represents vastly greater value to me. I get an income tax cut, a longer-term capital gains tax discount, and now the added bonus of supercharging my eventual SMSF pension via a property bare trust.

Of course I’m going to bid higher. Or at least bid the price unsustainably above its intrinsic worth, even as a renter/CG-er. The price bubbles are really being driven by an artificial financial product (that is, the government-mandated tax breaks).

Until the Ponzi-generating kinks are at least eased from the system, the only way it’s going to end is in buckets of tears. From everyone except the few well beyond whatever equity hump their portfolios represent.

Genuinely interested (because I may well just be a ranting idiot): is this wrong, and if so why?

Unfortunately removal of stamp duty would (in the short term at least) also have the same effect of pushing up prices, benefiting existing owners while requiring everyone to contribute more into general revenue to make up the difference. After all, the budget for most homebuyers is dictated by their borrowing ability. Less money set aside for stamp duty would simply give them a few more bids at the auction.

Having ongoing land tax as a replacement could eventually fill this revenue hole, but the higher prices would likely remain (again, people spend what they can borrow, and are not going to specifically factor future land tax into their repayment ability). Plus, good luck implementing ANY tax on residential properties.

The plan to use super is simply ludicrous, but is only a minor extension of the rule changes which already allow people to borrow and buy investment properties through their SMSF’s.

Absent being able to push interest rates up to more reasonable historical level, it seems that the most logical approach would involve a look at the expensive and counterproductive incentives for investing in existing homes, and some sensible limits on borrowing ratios (the ratio of interest-only loans is currently at frightening levels).

It’s also worth mentioning that pretty much all politicians face personal conflicts of interest in respect of housing prices. The numbers of investment properties held by MP’s is staggering, and very few would actually want prices to stabilise or fall.

If on the other hand they were giving tax breaks to BHP while each holding $millions in BHP stock, there would be a scandal.

Any investment should be able to carry forward losses against future profits and this is how the vast majority of businesses get started.

The perverse effect of negative gearing however, allows an investor to deduct real estate losses against their personal income tax, which is most likely the highest tax rate going.

The insult is then added in that investors fully expect to realise a profit eventually through capital gain.

I think allowing first home buyers to access their super for their home is sensible because it is the single most effective method of accumulating wealth for retirement but negative gearing must go at the same time.