The depiction of Russian President in the current season of House of Cards isn't all that far from reality, writes freelance journalist Sasha Petrova. 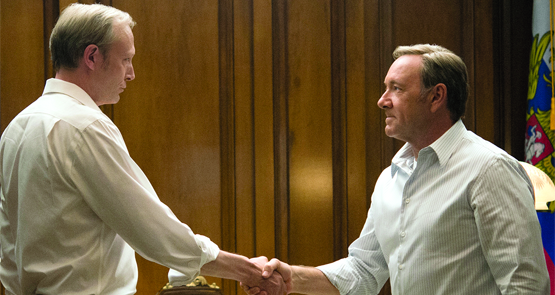 In reality, Russia’s President Vladimir Putin has quashed all legitimate efforts at establishing a democracy that would remove him from office through a peaceful vote, making the kind of revolution where statues are toppled the Russian people’s only option.

But never mind, this is entertainment.

As tension between the (real-life) American and Russian governments reaches boiling point, it makes sense that the geopolitical strain has returned to its familiar spot in American film and television.

But as the above quote makes evident, unlike the often black-and-white characterisations of villainous Russians in battle with the angelic Americans, the writers of House of Cards have adopted a rather considerate portrayal of Russia’s leader in the show’s third season. He’s a thug, but he has to be.

Balancing the scales, they have also established that there are no good guys in the world of politics — every leader is as ruthless as the next. There is thematic continuity in this. While the first two seasons were a comment on the corruption of America’s domestic political system, the third season merely casts the same assertions on a foreign power — the Russian Federation.

In season three, Frank Underwood (Kevin Spacey) is finally President. While it may be the end of his quest for ultimate power, the slippery way in which he found himself in the White House makes it tricky for him to hold on to the leadership. And the host of new enemies provides ample plot opportunity, especially when creator Beau Willimon takes the enemy trail all the way to Moscow.

There, on the Kremlin’s metaphorical throne, sits the ultra-masculine and authoritarian Viktor Petrov (Lars Mikkelsen). He’s an ex-KGB agent who loves posing for sporty photos without his shirt. Sound familiar? Interestingly though, and in stark contrast to Russia’s President Vladimir Putin (note the same initials), Petrov is conspicuously tall. In fact, Mikkelsen is about 22 centimetres taller than Putin. His gaunt stature towers over that of Frank Underwood, creating a curious subversion of reality: Russia’s actual incumbent looks like a comical midget when standing next to the statuesque Barack Obama.

With Claire Underwood (Robin Wright) as ambassador to the United Nations, season three sees the United States attempt to stabilise Middle-Eastern tensions by positioning peacekeeping troops in the Jordan Valley. True to life, Russia’s veto in the security council poses a problem and the White House invites Petrov to Washington in an attempt to woo him into supporting the plan.

The visit takes up a theatrical episode that includes a number of overblown and naive stereotypes of Russia. Petrov is confident, brazen and uncomfortably undiplomatic, telling Frank that Claire will enjoy visiting his holiday home in Sochi as there are lots of artists there and “she is sure to find something she likes” — a reference to Claire’s affair in season one.

Petrov’s crude attitude towards women is on full display, as he makes inappropriate comments to Claire and later kisses her on the lips in front of her husband. And his love for drinking and breaking into song is more reminiscent of Putin’s predecessor, Boris Yeltsin, who admittedly is more fitting of the stereotype of a Russian buffoon than Putin, who is reticent and often ill at ease in Western company.

“Let us all drink and laugh like true Russians do,” Petrov says at a dinner hosted in his favour, after which he instructs everyone to take a shot of vodka, and then another, and another and then, to much resistance from the responsible Americans, yet another.

The episode also features a cameo appearance from Russia’s punk band Pussy Riot. Band members and fierce Putin (and Petrov) critics Maria Alyokhina, Nadezhda Tolokonnikova and her husband Pyotr Verzilov, pose for photographs next to Petrov in a highly imaginative scene considering Alyokhina and Tolokonnikova were jailed for 18 months in a Russian labour camp for singing an anti-Putin song and the concept of press shots with them next to their jailer is ludicrous.

However, despite some immature, theatrical overlays, Petrov’s character is written as a no-bullshit straight talker; characteristics that come across as admirable, at least when compared to the underhanded Underwood whose true agenda is often hidden under well-honed diplomatic airs.

Petrov tells Underwood that, “Russia has nothing to gain from peace with Middle East”. It’s a controversial statement for a world leader to make but the audience is fully aware that although Underwood is too well trained admit it, he wants to create the illusion of striving to solve the Middle-Eastern crisis for his own gains as much as Petrov doesn’t for his. And Claire’s naive gaffes as ambassador to the United Nations give the Russians a chance to come off as all the more experienced and professional.

Even some of the Russian media have taken a liking to their country’s cinematic characterisation and the show’s writers’ apparent understanding that much of Russia’s paranoia of the West comes from the encroaching threat of foreign troops and NATO’s missile defence system so close to its borders.

It helps, of course, with the Russian audience, that the show’s priority is to explore the evil, power-hungry characters of the American President and his first lady.

The curious radio silence from Russia on the Boston bombings

Towards a ‘cold peace’: can Biden and Putin find a more ‘stable and predictable’ way to be at odds?