Not dead yet! Skywhale artist says she will fly again 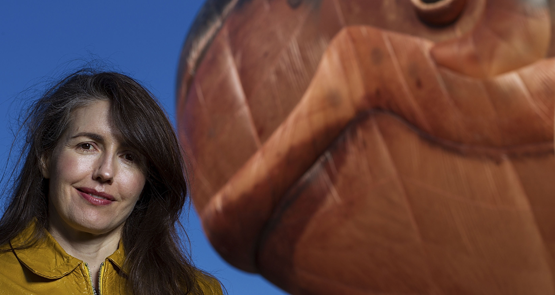 Now that Katy Gallagher has moved into the Senate, Andrew Barr is settling into the role of Chief Minister of the ACT. It hasn’t yet been three months, and the territory’s new Labor chief was certainly a bit rusty on Friday when he was chatting to 666 ABC Canberra and declared that Patricia Piccinini’s famous Skywhale balloon had come to the end of her natural life.

“It had a certain number of flights — and all balloons do, they don’t last forever,” Barr said. “I understand that it’s pretty well flown as many times, so no it won’t be in Canberra for the balloon spectacular this year.”

It wasn’t long before Barr was issuing corrections on both Twitter and Facebook, and the story of this “radio gaffe” subsequently ran big on ABC online and in The Canberra Times.

I’m lucky enough to be married to Patricia Piccinini’s sister Paula, and when she came over last night to pick up her kids after a play date, she agreed to give Crikey an exclusive interview.

“The operator who is licensed to fly Skywhale made a written low-cost proposal to the balloon festival to fly her this weekend, but unfortunately it was not taken up,” she said. “I tried to call Andrew Barr on Friday to pitch another idea I’ve got for how Skywhale could fly again in Canberra but was unable to get past his media adviser, Mark.”

“I hope he can find the time to call as it was disappointing to be not flying in Canberra now and it would be great to work out a way that some of her remaining 200-plus flying hours are spent in Canberra, which has such a great ballooning tradition.”

Patricia was taken aback by the enormous coverage of Skywhale when she was unveiled in 2013 for Canberra’s centenary celebrations.

At first the criticisms hurt, but over time this has diminished as Skywhale has travelled the world and generated enormous publicity for Canberra.

A Skywhale of a disaster