Israel will go to the polls on March 17, and politicians on all sides are focused on cost of living, the economy and housing. And tellingly, no one is promising peace. Freelance journalist Nigel O'Connor reports from Israel 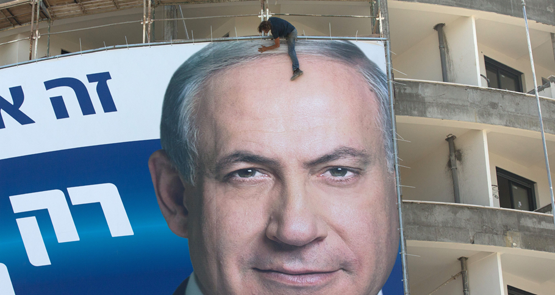 Two minutes into a standing ovation at the conclusion of his speech to the United States Congress, on Tuesday, Israeli Prime Minister Benyamin Netanyahu seemed reluctant to leave the podium.

“You’re wonderful!” he gushed as applause rang through the chamber after his lengthy denouncement of the framework agreement on Iran’s nuclear program being negotiated by the US and world powers.  Never mind that in delivering the speech, at the invitation of Republican Speaker of the House of Representatives John Boehner and without any regard to Obama’s White House, Netanyahu was not only deepening the divisions between the United States’ executive and legislature but also further straining his relationship with the President. In the midst of Israel’s election campaign it was a chance for Netanyahu to emphasise his ability to shine in the international arena, his strongest electoral asset.

Israel goes to the polls on March 17, with Netanyahu, who has been prime minister since 2009, likely to claim another term in office, according to commentators.

Polling suggests Netanyahu’s Likud faction will win fewer seats than its main rival, but it is better placed to negotiate a coalition government with right-wing and ultra-orthodox Jewish parties. Elections for the 120-seat Knesset are conducted using a proportional representation system (similar to the Australian Senate) where total votes for a party correlate to the number of seats won.  Coalition governments are the norm, and for nearly 20 years right-wing and religious parties have pulled the most clout. This month’s elections were called in December after Netanyahu declared the situation with one of his previous coalition partners, centrist party Yesh Atid, unworkable.

After years in the political wilderness Labor appears re-energised by the leadership of Isaac Herzog, whose grandfather was Chief Rabbi of Israel and father was a military general and Israel’s sixth president. Herzog negotiated a political coalition with veteran government minister Tzipi Livni’s Hatnua faction, which is running as the Zionist Union. A compilation of recent polling by Israeli newspaper Haaretz predicts the Zionist Union will win 24 seats, two more than Netanyahu’s Likud party.

“Even if Labor doesn’t win this year they have established themselves and could win the next election,” Haviv Rettig Gur, a political columnist with the Times of Israel, told Crikey. “The Left has not won power since 1999 and this is their first serious bid since then, but it will be easier for Netanyahu to cobble together a coalition between the ultra-orthodox, centre and right-wing parties.”

Significantly, polls consistently show between 15% and 20% of the electorate are undecided on how to cast their ballots. The campaigns by Netanyahu and Herzog to win these votes have respectively focused on regional security and the economy. As Netanyahu made his way back to Israel from Washington, Herzog criticised the Prime Minister — not for the content of his speech, but for the impact of his visit on US-Israel relations.

“The painful truth is that after the applause, Netanyahu was left alone,” Herzog said. “Israel was left isolated, and the negotiations with Iran will continue without any Israeli involvement. This speech badly damaged US-Israel relations. It won’t change the administration’s stance but will only widen the rift with our greatest friend and strategic ally.”

In relation to Israel’s continued occupation of East Jerusalem and the West Bank, and the siege of Hamas-controlled Gaza, Herzog’s Zionist Union has aligned itself with Israeli public opinion by not challenging the status quo with promises of a peace deal. On the topic of settlements, Herzog has indicated he would support expansion of existing large settlement blocs but would not encourage new building projects outside of these.

“Israeli public opinion on whether withdrawal could lead to a peaceful solution has been gone since the Second Intifada,” said Rettig Gur. “In Israeli public opinion promises of peace have not shown to be feasible for security. It is remarkable that Herzog said he is not promising peace, but the expectation is not there.  Before Labor united with Hatnua the parties had 15 and three seats respectively. Now they look like winning around 24. People believe Labor again.”

But there was little discussion on Tuesday, the same day as Netanyahu’s speech, when a video was released showing an Israeli soldier setting an attack dog on a captured Palestinian child in the West Bank. Earlier in the day, far-right extremists assaulted Haneen Zoabi, a Palestinian member of the Knesset, along with other panelists during a conference on women’s issues. Such events occur in a political vacuum away from mainstream political debate. Herzog has focused his campaign on the domestic economy.

More than 100,000 people marched in the streets of Tel Aviv against rising living costs, but the movement found no political base. In February, Herzog outlined a plan to ensure fair rental prices and facilitate construction of new housing. House prices have been one of the drivers in rising living costs, increasing more than 50% since 2008.  A report released last month by State Comptroller Yosef Shapira placed blame for the housing crisis on government inaction and bureaucratic obstacles — during the period of Netanyahu’s time as prime minister.

Politics in Israel is never dull. Advertising in this campaign has featured memorable efforts including Naftali Bennett, leader of the right-wing HaBayit HaYehudi (Jewish Home) party, walking the streets of Tel Aviv dressed as an apologetic hipster, and a Likud commercial showing a carload of Islamic State militants being directed by unsuspecting left-wing voters into the streets of Jerusalem.

Meanwhile, corruption scandals have plagued the campaign of Foreign Minister Avigdor Lieberman, leader of the far-right Yisrael Beytenu (Israel Our Home) party. A raft of high-ranking party officials faced court in December on charges including bribery and fraud. The party’s number of Knesset seats looks to drop from 13 to six, according to polls.

Last year, Lieberman introduced a new law raising the threshold of the minimum percentage required for parties to achieve representation in the Knesset from 2% to 3.25%. The laws copped criticism as designed to further sideline already marginalised Arab political parties and voters, but they could pose more of a threat to Lieberman’s political future as voters snub his party.

In response to the new threshold Israel’s disparate Arab parties formed a single electoral entity, the United List, to ensure their survival. Although they make up 20% of the country’s population many Arabs have traditionally boycotted national elections — but turnout is expected to be higher than the 56% who voted in 2013. Aymen Odeh of Hadash, an Arab-Jewish communist party, heads the coalition of Palestinian nationalists, Druze and Islamists. The United List is predicted to achieve 13 Knesset seats — making it the third-largest single bloc — although Odeh ruled out joining a coalition with Herzog’s Zionist Union.

One potential kingmaker is Moshe Kahlon, a Likud defector and now head of the centrist Kulanu party, expected to command a bloc of eight seats.

Netanyahu leads Herzog 44%-36% as preferred prime minister. The right-wing vote may be split, but Netanyahu appears to remain the consensus candidate.