What will the "consequences" be for Indonesia if it goes ahead with the planned execution of Myuran Sukumaran and Andrew Chan? Foreign policy experts weigh in. 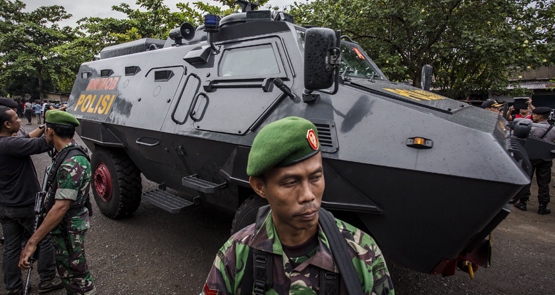 Australian Foreign Minister Julie Bishop has said “I am sure that Indonesia understands it will have consequences” should it go ahead with plans to execute Bali Nine duo Andrew Chan and Myuran Sukumaran. What could those consequences be, and is Indonesian President Joko Widodo likely to consider them? Crikey has asked foreign policy experts to weigh in.

Many Australians are sickened that Andrew Chan and Myuran Sukumaran, two Australians sentenced to death by Indonesia’s courts for drug smuggling, have been transferred to an Indonesian island in preparation for their imminent execution.

They are slated to be executed alongside three Nigerians, a Filipina, a Brazilian, a Frenchman, a Ghanian, and an Indonesian.

“I am sure that Indonesia understands it will have consequences,” Australian Foreign Affairs Minister Julie Bishop told journalists.

But the Indonesian-Australian relationship has been so fraught with tension lately it’s unlikely that unilateral measures Australia could take — like recalling the ambassador or suspending trade deals — will make any difference.

Instead, Australia should jump-start a campaign to reject the death penalty across the Asia-Pacific, educating the region’s populations in how the death penalty has failed to deter crime and been unjustly applied, and gradually building pressure against the practice.

These are universal values, not Australian values. The United Nations opposes the death penalty. The UN General Assembly has passed resolutions year after year calling on countries to suspend use of the death penalty with a view to its abolition. UN Secretary-General Ban Ki-moon has said “the death penalty has no place in the 21st century” and urged Indonesia to reconsider these executions.

Australia should partner with the United Nations and anti-death penalty countries like the Philippines and Cambodia in this initiative, targeting countries that continue to execute people — China, Malaysia, Singapore, Thailand, and Vietnam — as well as Papua New Guinea and Brunei, which are taking steps to bring the death penalty back.

For this to work, people across Asia need to be mobilised. It’s not only Australians who are disgusted by this inhumane practice. Reaching out to and building support among Asians and Pacific Islanders should help to end this cruel and inhumane punishment once and for all.

In considering a response that might have teeth it needs to be asked what is the most important aspect of the relationship. The cattle trade, students?

In truth, there is not a lot Australia can do to cause Indonesia pain over the executions. There is little of importance in the relationship, and that is a terrible condemnation of successive Australian governments. Both Labor and Liberal governments have thrown away leverage over stopping the boats, particularly Prime Minister Tony Abbott and former immigration minister Scott Morrison.

At the level of government in Indonesia there is little respect for Australia and the way it conducts itself towards Indonesia, other Muslim countries and refugees. Australia is perceived as selfish, immature and racist.

Australia has demonstrated little understanding of the social, cultural and political complexities that are interwoven throughout the archipelago. Calling for a boycott of Bali falls into the category of immature.

One thing Australia might consider is to cease all contact and training with the Indonesian police and military for two years.

A consultant on Indonesia-Australia relations writes:

There is probably very little that the Australian government can do, or more accurately is willing to do, if the executions indeed proceed. If Australia chooses to implement punitive actions against Indonesia in response to the execution of Andrew Chan and Myuran Sukumaran, this will ultimately prove counter-productive to Australia’s considerable defence, security, development assistance and commercial interests in Indonesia. Despite the impending tragedy of the Chan and Sukumaran case for the individuals and families involved, Indonesia remains a country of abiding strategic importance to Australia. Even at the nadir of the bilateral relationship resulting from Australia’s military-led intervention in East Timor in 1999, relations recovered surprisingly quickly. This reveals that beneath the bilateral spats, there is more resilience in Australia-Indonesia relations than many in fact appreciate.

Tragic and pointless as Indonesia’s use of the death penalty is, it is difficult to see the benefit to Australia of imposing penalties should Chan and Sukumaran be executed. Too often, Canberra and Jakarta deal with bilateral problems by engaging in tit-for-tat responses. The result is a downward spiral of increasingly grumpy exchanges until both sides stop talking to each other for some months. Then follows a slow recovery as governments discover that it is important to maintain contacts, and a rapprochement of sorts is agreed. This has been the unproductive pattern of Australia-Indonesia relations for decades.

What consequences will Australia mete out to Indonesia for carrying out its death penalty? The most likely is that our ambassador will be called home for a month or two. A defence exercise or two may be cancelled. Senior Indonesian political visits may be postponed. That’s the sensible limit, but even these small-scale measures will do nothing to enhance mutual understanding.

How much better would it be for both countries if, out of this tragic event, Australia and Indonesia agreed to form a senior advisory group of people of goodwill from both countries? The first task of such a group might be to make recommendations on how to better manage prisoner exchanges and to quell drug trafficking. Sadly, the chances of such a productive approach are low, at least in the short term because both countries will prioritise responding to domestic popular sentiment than to trying to build a calmer and more stable relationship.

Tears, anger and diplomatic posturing: how the day unfolded for Australia

How to burn diplomatic capital:

– A callous (or calculating) AFP sending lambs to slaughter, thus ensuring this fracas
– Failure to then respect Indonesian law and sovereignty
– A bumbling PM egregiously threatening Indonesia over Tsunami aid
– Further pressure applied as per point #2

Let’s say the sentence is commuted to life-in-prison. What’s the equivalent max sentence in Australia? The AFP’s actions are still indefensible.

From what I remember there was a media and vocal public cheer squad when the Bali bombers were being executed by firing squad. What’s happened? After all it’s about the death penalty. This time of course there are Austalians involved. Talk about double standards.

There should be consequences arising from the debacle that this episode has been from go to woe – the relationship between Australia and Indonesia should matter. But I suspect, as someone with business and family links to both, I will go on doing what I have done for the last 25y – doing my best to overcome the destructive influence of corrupt self interested pollies on one side of the border, and ignorant self righteous ones on the other.

Let’s not preach about “universal” standards – Australia with its well-known miserable record of indigenous deprivation and recent adoption of gulags for unconvicted asylum seekers has little to say about universal standards. Instead we could take note of the fact that Islam recognises the death penalty in some cases of murder and rape but not in connection with the use of or trade in narcotics. Indonesian law is based on Dutch law, not Islamic law but a smart approach via internationally respected Muslim figures could possibly prick some consciences. Not, please, please, more preaching from Australian pollies.

Watch Barnarby Rudge go apoplectic at the though of damaging the live cattle trade.