Muir makes the most of it. Although the election of Senator Ricky Muir from the Motoring Enthusiast Party has led many to say that our political system needs fixing, Muir has used his first speech in the red chamber to say that the system is not broken because it allowed a man like him — who left school at the age of 15 and bought his first suit after getting elected — to become a Senator. Many MPs use their first speeches to speak about  political ideology or to quote famous poets, but Muir quoted the definition of democracy and name-checked Channel Seven journo Mike Willesee. His first speech came eight months and four days after the beginning of his term, but Muir did manage to win over his audience, especially when it came to discussing his young family. It wasn’t all warm and fuzzy, though, as Muir spoke about how important penalty rates are and took his fellow pollies to task:

“I do not have a long political past to speak about. I cannot speak about a time where I was a staffer for another senator or member or speak of time spent in university whilst completing a bachelor of political science. I do not have a long seeded history with a traditional party with deep seeded policy positions and rehearsed catchphrases to sell.

“I have a long history of living at the receiving end of legislative changes, of feeling the squeeze of new or higher taxes, feeling the pressure and even losing sleep when you realise that the general cost of living just went up a tiny $20. To everyone sitting in this chamber, if you think $20 a week is nothing, or just a pack of cigarettes or a few beers, you have never lived in the real world.”

Mates and favours. Today’s the day that the ladies of the Queensland LNP hold their International Women’s Day lunch at the men-only Tattersall’s Club in Brisbane. While the venue has been defended as a last-minute choice, we hear there may be more to it:

“Apparently the lunch venue of Tattersall’s men’s only club in Brisbane was chosen by current LNP Opposition Leader Lawrence Springborg who along with a number of ther key LNP Parliamentarians is provided with free membership courtesy of the Club.  Perhaps it is their way of saying thank you?”

We put the question to Lawrence Springborg’s office but didn’t hear back by deadline.

Aston’s enemies. We’ve been watching with interest as the Australian Financial Review‘s Rear Window columnist Joe Aston has steadily taken aim at many of his own Fairfax colleagues. Quentin Dempster (now at the SMH after a redundancy at the ABC) and Fairfax board director Todd Sampson have been recent targets. Another continued subject of Aston’s pen has been Liberal pollster Mark Textor — Aston says he’s on the outer with Prime Minister Tony Abbott. Last week, Aston messed up a tip saying Textor had had lunch with Liberal director Brian Loughnane. Aston has corrected the record in subsequent columns, but not without using the opportunity to take a few more swipes at the pollster — he was at it again yesterday. We heard a whisper that Textor was so annoyed with his treatment by Aston that he had pulled his monthly column in the AFR, but the man himself responded thus: “That is untrue.” We put the same thing to the Fin, but didn’t get a response. Nonetheless, we imagine it would take more than a few mentions in Rear Window to get Textor to give up the gig.

Speechwriter out from the shadows. This year’s Whitlam Oration was given in Melbourne on Wednesday by legendary speechwriter Graham Freudenberg, and it was filmed by award-winning documentary-maker Ruth Cullen. She’s working on a doco on Freudenberg to be completed later this year. Cullen is the daughter of the late Peter Cullen, who worked for Whitlam after the infamous dismissal in 1975. Because “Cull” and Freudie were inseparable political warriors, Ruth’s doco is a labour of love. She has captured footage of the great wordsmith at his retreat on Bribie Island north of Brisbane and at the Sydney launch of James Carleton’s book The Wit of Whitlam.

Ruddock a man of many interests. Parliament’s Joint Committee on Human Rights is expected to change direction in the tone of its reports, with Western Australian Liberal Senator Dean Smith being replaced as chair by Philip Ruddock, after Ruddock was dumped from the Liberal chief whip job by a vengeful Tony Abbott in the aftermath of the leadership spill bid. Under Smith, the committee wasn’t afraid to criticise government legislation for its human rights impact and produce a series of reports doing exactly that. Ruddock has been active on the issue of the Chan/Sukumaran executions and recently restarted the parliamentary friendship group for MPs against the death penalty with Labor’s Chris Hayes. Ruddock’s new image as a human rights activist is in dire contrast, of course, to his time as immigration minister (when he notoriously referred to an asylum seeker child as “it”) and then as attorney-general, when he used the War on Terror to launch a savage assault on some of Australians’ most basic legal rights — not to mention his recent performance on the Joint Committee on Intelligence and Security, where he has berated anyone who has dared raise concerns about draconian changes like data retention. So which Ruddock will chair the human rights committee — Phil, the man once noted for being a moderate liberal, or the hardliner who wants data retention for internet cafes and five-year retention periods?

Radio rivals unite. Southern Cross Austereo has had a big week, losing a High Court challenge related to the royal prank and being forced to defend Perth boss Linda Wayman, who has said she gives staff condoms to prevent pregnancy and that work-life balance is “bullshit”. But a tipster at the ABC tells us that the embattled network has some good news on the way, as the ABC has signed up to be a part of SCA’s new radio streaming app, imaginatively called “The Radio App”. According to an email sent to ABC staff and seen by Crikey, the app won’t compete with the ABC’s own offerings, although our tipster is suspicious. Says the ABC staff email:

“This app for iOS and Android devices will link to audio streams for all SCA and ABC stations — including ABC Regional stations when they begin streaming — with others to follow, making it an all-radio offer in the same way that a radio provides a wide range of choices. We are still to ink the final contract on this, but it’s simply another pipeline to potential audiences — and one they take with them on their phone wherever they go. It’s free, and acts like a set of bookmarks to link to audio streams – no pausing or recording or log-in, just linking. We will give you more technical information about The Radio App closer to launch date, but it’s important to understand that this is not in any way competing with the ABC Radio App, which we are continuing to develop and enhance.”

Can you bear it? Residents of Portland were treated to some koality viewing this week when a furry marsupial decided to go for a walk down the main drag. He didn’t disturb anyone, but one local got a video of the encounter: 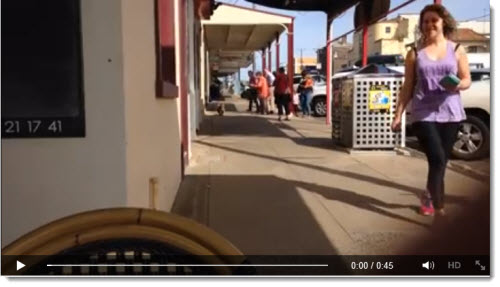 Gippsland the one to watch in “Super Saturday” byelections

People never cease to amaze and long may they do so.

Muir seems to show that perhaps common sense can impact against partisanship.

Good on Muir and that blonde kid in the video has a future if journalism survives – how much can a koala bear?