Rundle: Leyonhjelm is right about constitutional recognition … sort of

Constitutional recognition of Aboriginal people should not be taken as a sine qua non on the path to equality. 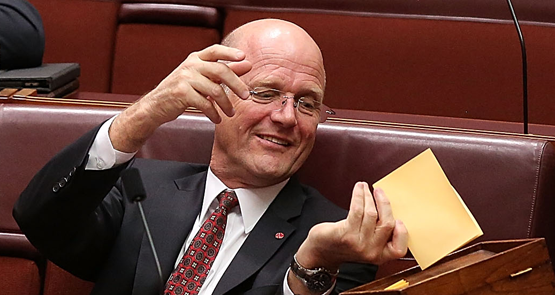 One cheer for Senator David Leyonhjelm? Half? Three-quarters?

Even if a lot of his arguments are bogus, we have to question the push to recognition.

The campaign for constitutional recognition of indigenous Australians is one of the closest things you will see to soft totalitarianism anywhere. Pushed by the majority of indigenous peak bodies, the liberal Left, the cultural Left, the churches, the centre Right, and Tony Abbott, the issue has been constructed as one of simple modernisation, to which no one could possibly object.

The campaign in that form has been modelled on earlier campaigns — the referendum for full citizenship in 1967, and the Freedom Rides, which went up against institutionalised rural racism in a way that was simply and obviously extending the basic liberal rights.

But constitutional recognition is different. Firstly, it’s a campaign for non-universality — for the specific recognition of a specific people. Secondly, its an amorphous symbolic act that could be done in half-a-dozen different ways. Third, the question as to whether this is what a majority of the indigenous population clearly and unambiguously want is being ignored.

The push to make recognition a matter of non-political obviousness has been helped by much of the right-wing campaign against it, some of which has been European supremacist, some of it based on spurious notions that it will promote “division”, as if there were none already. A “Left” or “critical” rejection of it — most visibly represented by Celeste Liddle — has had been given very little public space to mount a critique.

The potential objections to recognition are so many and deep that the lack of a real debate represents a travesty. Recognition could be seen as co-option to a document that is a charter of domination; it can be seen as a form of de-recognition, by removing any notion of irresolvable conflict between colonisers and colonised; it can be seen as a theft of the opportunity for indigenous people to achieve recognition through a renewed collective resistance; and it can be seen as yet another channelling of political energy into a pacifying process, putting indigenous people in a position of petitioning to be granted something by the “other”. Constitutional recognition makes the state the “subject” of society, the thing that grants identity by seeing; it substitutes a state process for a social one.

So whatever else he has done, David Leyonhjelm has achieved something by putting a full series of objections to the process, which has otherwise been steamrollered through every possible forum. Much of it is spurious, especially the notion that recognition represents a “form of racism” — the ever-uttered whine of white resentment and envy of strong resistant communities.

But Leyonhjelm is right to question the idea that the state should set down an account of history, as an imposed truth, and that there should be no real debate about this idea — even if he had to raise this right-wing obsession about the very faint possibility that other human groups had been on the continent around the time that the first Aborigines arrived.

What has to be acknowledged in any recognition process — whether it’s a state one or not — is that the relation between indigenous and non-indigenous people is that of invasion, occupation and genocide. Yet this reality is starting to be sidelined by emphasis on origins, world’s oldest continuous culture, etc. Originally promulgated decades ago to contest simplistic European chauvinism, the “approval” of Aboriginal culture has become patronising and provisional. Increasingly, too, notions of the existence of a whole people and world prior to 1788, and smashed by it, are starting to yield to a simplistic notion of possession and ownership, which retrojects current notions of how society should be shared out, putting the past in terms of the present. Casting a prior people as the “landlords” obscures the fundamental historical event that occurred.

I suspect many people would reject such suggestions about a change that many people want to see. But these would be the same people who would object to attempts to crack down on “extreme speech”, increasingly widely defined, and the notion that some forms of speech, odious as one might find them, can be banned as unAustralian, indeed as a mode of protecting free speech. The Australian state was pretty much founded on a state recognition of a “truth” — the White Australia Policy — which struck the vast majority of white people at the time as simply and obviously unquestionable. Such racialist notions were the product of imperialism and undergirded it. The notion that constitutional recognition is an “obvious” move that no one could question arises in a globalised multicultural society that retains a somewhat self-flattering idea of the power of current words to change past deeds.

Decades on, it might well be seen as patronising and co-opting, and people may find it as incomprehensible as the 19th century’s obsession with measuring and comparing skulls. At the very least, it demands a real debate about what constitutional recognition means, and what difference the presence or absence of a treaty makes. And it seems ludicrous to move to a vote on it without a prior plebiscite of indigenous people to establish that this is their overwhelming majority will. Without that, with indigenous people counting as 2%-3% of the voting population, recognition simply becomes another act of settler imposition and definition, and the motives, good, bad or otherwise, become irrelevant. So one cheer for David Leyonhjelm. No, half. OK, three-quarters. I dunno. He’s a real worry, but at least the process is opened to question once again.

Rundle: how the sop of ‘recognition’ forces Indigenous people to beg

In for a treaty: leaders give indigenous Australians hope

Agree with Rundle, without giving any credit to creepy Leyonhjelm, who quacks like a duck. Suspicious of rush towards an easy feelgood referendum that will have little tangible effect, but will give Abbott Govt a positive lift in the polls for being so kind to Aboriginal people (spare us). Don’t trust Warren Mundine either.

Aboriginal people would gain a lot more from a referendum for a Charter of Rights, as would the rest of us. We are the only western nation without such constitutional recognition and way behind the rest of the developed world on this front. This would at the very least secure aboriginal voting rights and perhaps a whole lot more of substantial benefit to the First People.

“Originally promulgated decades ago to contest simplistic European chauvinism, the “approval” of Aboriginal culture has become patronising and provisional.”

and oh so fashionable in the luvvy duvvy set and the chattering classes.

The idea of the constitutional referendum is ‘nice’, as is a cup of tea and an iced vo-vo, but smacks to me of a symbolic gesture, because actually doing something is just beyond us.

I’m with Susan Winstanley that a charter of rights for everyone would be much more meaningful, and on top of that, add a damn treaty, a real one.

That might have something of substance in it. Constitutional recognition is right up there with John Howard’s ‘ode to mateship’. A quaint idea, out of date before it even gets up.

Before holding a full-on constitutional referendum, how about a plebiscite of Aboriginal and Torres Strait Islanders to decide:
(a) whether they want constitutional recognition, and if so,
(b) what form the words should take.

Or how about a plebiscite of all Australians as to whether we want a new constitution of and for all of us, duly acknowledging our past warts and all but with a vision of where we now are and are going!

I don’t think we are talking about approval of Aboriginal culture, but we are constantly told to approve the culture that brought convicts into exile and often treated them with abominable cruelty. However, I see a much more important issue in the remaining race powers which allow amazing discrimination without much oversight.