Is Alphatise a dead letter?

Alphatise has ambitious targets and big plans for getting in on a piece of the group-buying pie. But does its reach exceed its grasp?

In every boom there are great companies born and fortunes made. In the first dot-com bubble, Google, Alibaba, Amazon, eBay, Expedia, Priceline and Saleforce.com were created. In the Web2.0 era, we saw the likes of Facebook, LinkedIn, Uber and YouTube rise. But bubbles are also known for the less successful businesses — like Pets.com and webvan. These are often started by entrepreneurs with the best of intentions, but whose businesses fail due to management incompetence or simply having a product that people don’t want (or often, both).

Australia has incubated a number of successful e-commerce businesses in recent years, led by Catch of the Day and Gray’s Online, as well as OzSale and Kogan (disclaimer: my business AussieCommerce is an e-commerce retailer). But with the successes come the failures. At one stage, the group-buying sector had more than 80 participants (there are now about five remaining).

Against the backdrop of a booming e-commerce sector, e-commerce hopeful Alphatise, was launched in August 2014. Backed by BRW Young Rich lister, socialite and mobile phone entrepreneur Zhenya Tsvetnenko, Alphatise allegedly raised $3.5 million and managed to capture the attention of the mainstream business press. However, a closer look at the model shows Alphatise seems to be more Pets.com than Amazon.

The first problem with Alphatise is that it’s difficult to work out exactly how the site provides a real service. While its founders compared it to Amazon and eBay, Alphatise claims to offer consumers a new way to buy products. Customers can click on a list of products (ranging from cameras to knife sets to Bose speakers) and suggest how much they would like to pay for a product. After a number of people suggest a price, Alphatise claims that it finds a retailer (like Harvey Norman or JB Hi-Fi) to supply to product for the discounted price. What isn’t explained is why a distributor or retailer would bother with such a confusing platform, or how the retailer and Alphatise are both able to make a satisfactory margin on the sale.

A confused business model didn’t stop Alphatise getting a blaze of publicity in August last year. Co-founder Ben Nowlan told Crikey sister site StartUpSmart in August that the site had a target of 100,000 users by December and that the founders had “ambitious goals, but that’s exactly what Australian start-ups need to do to be successful.”

Talking to News Corp, Nowlan humbly conceded that “Alphatise is not like Amazon” — which appeared fairly obvious given that Amazon has a market capitalisation of US$179 billion and actually has a functioning business.

By January this year, it appears a few things had changed. Nowlan seems to have disappeared, with StartUpDaily noting that the business was co-founded by Paul Pearson and Richard Frey. Also, the amount of capital raised by the business was no longer $3.5 million but only $1.5 million.

Meanwhile, the goal of 100,000 users seems elusive. An Alexa search indicates that Alphatise is the 764,230th most visited site on the internet (most likely getting less than 10,000 visitors a month — another contradiction to Pearson’s claims to The Sydney Morning Herald of having 20,000 active users). Nowlan’s aim of a “Series A funding round within two months, chasing a funding goal above $10 million and a company valuation above $100 million” appears even less likely.

Despite the business’ troubles, Pearson didn’t hold back from criticising two of Australia’s most successful e-commerce businesses, noting that Alphatise “is about group buying, and I hate that word because I think it’s tarnished by Groupon and Catch of the Day”. Ironically, Nowlan, Pearson’s (possible former) co-founder, spent three years as a sales manager at Groupon, and Catch of the Day isn’t a group-buying business at all — it’s a flash sales product business (something Pearson should probably have figured out).

That said, it’s unlikely Catch or Groupon executives have lost much sleep about Alphatise — according to Google Trends, search traffic for Alphatise is so low it doesn’t register on the charge (other than a tiny blip when it launched in August). 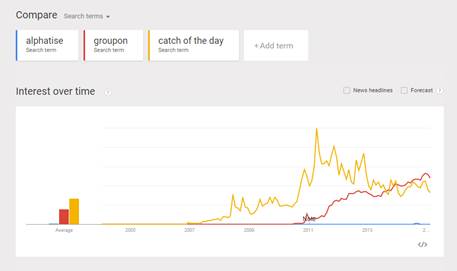 Crikey attempted to contact Alphatise, but its support number appeared to go the personal voicemail account of someone called “Megan” and its online support page was not functional.

The Amazon behemoth is finally starting to stir in Australia