Tony Abbott's recovery hinges on whether he can bribe voters to think more positively about him whenever they stop thinking about national security and focus on issues of greater importance. 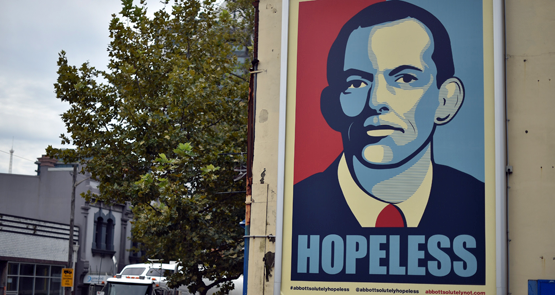 A week, proverbially, is a long time in politics, especially now that seven days constitutes around 20 separate media cycles in which issues can arise and disappear in less than a day. But things now look as bright for Tony Abbott as they looked bleak this time last Friday, when a move on his leadership was expected sometime this week.

In the interim, Fairfax had a poll showing a dramatic recovery in the Coalition’s fortunes, although Abbott’s own personal ratings were still dismal, and both Julie Bishop and Malcolm Turnbull outpolling him as preferred leader. Oddly, The Australian, which normally likes to pretend no other polls exist than its own Newspoll, prominently carried the Fairfax poll and its good result for the Coalition.

The problem with the Fairfax poll is that it is simply too infrequent to be useful, and it can’t really show what’s happening trend-wise. Newspoll last week showed a Coalition recovery, but only from the nightmarish to merely rotten level of 53-47. Essential, which because of its rolling two-week average is the chilled-out, feet-up-on-the-couch poll, showed a recovery for the Coalition in the week after the failed leadership spill bid, but only to 53-47, and it didn’t shift further this week.

So the most we can say currently is that the Liberals stopping ripping themselves apart enabled them to get back to the sort of poor levels of polling they were achieving prior to the spill.

Nonetheless, the talk this week was of an Abbott recovery. He certainly had a better week than last week, which was almost completely derailed by his personal vendetta against Gillian Triggs, and there was only one relatively minor cabinet leak — that Abbott had by implication rebuked Peter Dutton for his “mishandling” of the GP co-payment, more a statement of the profoundly obvious than a stunning revelation.

If there has been a recovery — and more polling next week will show which way the momentum is heading — then Abbott’s focus on national security will have played an important role. Unlike virtually every other issue, voters are happy with Abbott’s handling of terrorism and appear unfazed at his remorseless erosion of their basic freedoms as part of it. Attacking Muslims and foreign investors won’t have hurt him with the Liberal heartland, either. Abbott sought to continue that this week by wrapping himself, almost literally, in the flag and announcing a return to Iraq. This will place Australians at greater risk of domestic terrorist attack, but that probably doesn’t worry Abbott too much, since such an attack, unless he comprehensively bungles the response, would only enable him to continue to play the national security card.

In the absence of that, however, national security is a polling sugar hit. We saw that last year when an aggressive Abbott, boasting of shirt-fronting Vladimir Putin, constantly saying “death cult”™ and warning of terrorist attacks, got a temporary lift in the polls until voters returned their attention to the issues of permanent concern — the economy, health education, etc. And because of the disastrous budget, whenever voters did so, the government’s stocks fell again.

This time Abbott is working to ensure voters have less reason to be unhappy when their thoughts return to domestic matters. Using the strategy John Howard deployed in 2001, he’s throwing money at the government’s political problems. The ADF pay cut problem has been address by turning what was a real pay cut into a tiny real pay rise, at the cost of hundreds of millions of dollars to the budget. And the GP co-payment has been abandoned as well.

Kind of. Health Minister Sussan Ley had to walk a fine line this week in explaining that the co-payment was off the table but she was still talking to doctors about ways to reduce the level of bulk-billing. Ley did a reasonable job, particularly when she made her somewhat nervous debut as a cabinet minister in the Blue Room, of maintaining both positions and emphasising how important further consultations were. Abbott didn’t walk any fine lines. In question time, Abbott declared any form of government-imposed co-payment “dead, buried and cremated”. That means the government can only achieve its goal of reducing bulk-billing rates by somehow encouraging GPs to do so, which was the strategy Abbott and Dutton announced in December — basically curbing GP income to force them to charge patients. And that was what exploded in the government’s face back in January and sent Ley around the country consulting with doctors, to the dismay of Abbott’s friend and co-payment architect Terry Barnes.

Meantime there’s the families assistance package that the government is working on, which it hopes will bribe voters out of their sullen mood and get them looking afresh at the Abbott government and, hopefully, opening their wallets. National security, demonising Muslims and attacking foreign investors is merely a stopgap for the real work of buying back voter support. It won’t do the budget bottom line any good, but Abbott is looking at a much shorter time frame than forward estimates. And that’s the key to whether he can survive.

The ALP must be loving the Abbott recovery and his delayed replacement.

Anyone who thinks that Tony Abbott and the coalition ‘recovered’ after a week of attacking Professor Triggs and myriad other disasters, just like every other week, has very little understanding of the way polls work.

The most likely result is the the previous polls showing 57-43 and 56-44 were outliers, and that this poll of 51-49 was also an outlier, and that the middle ground of 53-47 was probably closer to the reality.

The week before this latest poll was as bad as any for the government. People don’t change their mind on that basis, unless the assumption was made by people that Abbott would soon be gone and they were casting their opinion based on him leaving.

Statistically, the next polls are much more likely to come in at the 53-47 mark, still with a 1-2% margin of error, but the trend is unlikely to be otherwise.

Can hardly wait for the next installment of ‘Abbott snatches defeat from the jaws of victory’.

Move along, nothing to see here. Just ensure Tone has enough rope and he’ll do the rest.

The most disturbing line in the whole article is “voters are happy with Abbott’s handling of terrorism and appear unfazed at his remorseless erosion of their basic freedoms as part of it.” We are victims of our own success, aren’t we? People have become so used to the idea that dangerously totalitarian regimes are an inimical foreign Other that they cannot see one developing right under their noses.

As a nation that is an English-speaking Winner of World War II, by definition, would never start disappearing people in the early hours of the morning without good reason. Would we? Good Australians have nothing to hide, and nothing to fear. Do they?

Both sides of politics in Australia, but particularly the right, need a purge. We need a new cohort of leaders who have the vision and principle to champion the freedoms that Australians fought and died for 101 years ago and again 76 years ago, who can rein in the totalitarian tendencies than exist within the major Political Parties, who can end attempts to trammel, silence and micromanage individual human beings, who act as representatives of those people rather than as agents of giant corporations, who can set an example of calm, rational reaction to the tiny actual threat represented by “terrorism”.

Above all, we need leaders who can encourage and educate the populace into appreciation of and respect for the freedoms that are the basic rights of themselves and others. Where are such leaders?