Yesterday, AFP Commissioner Andrew Colvin delivered a speech in Sydney that was heavy on corporate jargon, and light on answers for the Bali Nine duo. 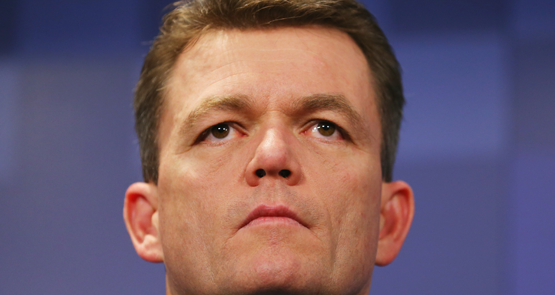 Delivering his first-ever public lecture on the day that two members of the Bali Nine were facing execution was never going to be an easy task for Australian Federal Police Commissioner Andrew Colvin.

He must have known he’d be asked about the Bali Nine, as it was the AFP’s involvement in 2005 that got them arrested. After the AFP officer in Bali tipped off the Indonesian police that the young Australians were preparing to import heroin into this country, they were picked up at Denpasar Airport.

At yesterday’s lecture to Sydney’s Lowy Institute, however, the Commissioner adopted a two-pronged approach to avoiding any hard questions. First, he delivered a 40-minute speech so long on corporate-speak it sounded like it had been written by Kevin Rudd. Just as we were nodding off, he ended by saying that he couldn’t comment on the Bali situation on the grounds that it could hinder the ongoing pleas for clemency:

“I understand the Australian public’s right to better understand the AFP’s work and its role back in 2005 during the Bali Nine investigation. However, I would also like to say that much of the information that has been circulating in recent weeks doesn’t accurately reflect our role and work in 2005, and ignores the findings of several reviews and judicial hearings that have since scrutinised the AFP’s actions.”

Colvin concluded: “Now is not the right time for the AFP to discuss this matter in detail.”

I had made a private bet that someone would ask Colvin if he had “blood on his hands”, and, thanks to the AAP reporter, was able to collect. The commissioner’s answer, predictably, was “no”, describing the conspiracy theories about the AFP’s role as “misinformed and misguided”.

It wasn’t a satisfactory response to a colourful but perfectly logical question about the role of the AFP in this horrendous saga. Former foreign minister Bob Carr recently questioned the actions of the police force, saying that:

“I think all Australians who are aware of this case believe that the AFP has an obligation to explain why they were effectively delivered into a jurisdiction that applies capital punishment, when it appears there was enough evidence to arrest them on Australian soil.”

Colvin clearly doesn’t agree, adopting the “on water” excuse for an information blackout. Instead, what we heard was a long-winded mission statement about the bureaucratic workings of the AFP. The commissioner, appointed last September following a 25-year career in the force, said he had commissioned a “futures paper” to build a “capability roadmap”:

“We will challenge the paradigms of traditional policing methods, explore opportunities to help shape the environment that we operate in and encourage unique combinations of specific skills, capabilities and systems that will support a more effective AFP. Working with a key stakeholder group, the paper should identify areas or themes for a consideration that the AFP may not have otherwise considered.”

If the AFP is now writing unreadable reports about its paradigms rather than getting out there and finding bad guys, then heaven help us all. For an organisation that deals with terrorism and cyber crime, this was a disheartening descent into management-speak, and for that we can probably blame the Commissioner’s master’s degree in public administration from Harvard.

However, he did offer some enlightened comments about the Australian Muslim community, in the context of a question about the hostage saga at Lindt Cafe. This wasn’t an issue for Islam, he said, it was about a criminal doing terrible things.

The “Australian Muslim community has been incredibly supportive of what we do,” he said, adding that he felt very sorry for those people (usually women who wear burqas, niqabs, hijabs, etc) who have been attacked or vilified in public places.

It was a positive way to end the speech, which had provoked more questions than it had answered. Did the AFP help to jeopardise the futures of nine Australian citizens for the sake of a closer working relationship with the Indonesian police? As two young Australians say a final farewell to their families before the firing squad, it seems a question worth asking.

AFP: we did everything right with Bali nine case

The AFP, Bali Nine and Howard’s war on terror

Ten years gone – will we have to wait another 20 before we get the “declassified” truth?

The corporate I used to work for dropped the management weasel words over a decade ago.

The staff, customers and shareholders kept asking difficult questions like (using Colvin’s example): “What are the current paradigms of traditional policing methods and what methods will you use to challenge them?”

Being unable to articulate what they were on about, HR embarked on a “war on weasel words”. I have no idea if the replacement “paradigm” of “360 Degree Feedback” is still in use or suffered the same fate.

Once the AFP gets to the “Six Sigma” stage of corporate evolution (and fails) you know they will be ready to enter the 21st century and drop faxes in favour of email. (Yes! All metadata retention requests to telcos are faxed.)

Hey Commissioner Colvin, I’ve got an idea for your futures paper’

“We will be accountable for our mistakes, admit to our errors and spend our resources on learning from our mistakes and misjudgements rather than obfuscating, misinforming, dodging and weaving.

Collectively, we will admit that we completely misread the Bali nine situation, admit that we offered into the hands of Indonesia a group of young people that could have and should have been arrested in Australia, admit that the king pins are still running free while the mules are being incarcerated and two probably executed, and gained nothing of real substance for giving up Australian nationals to a regime that imposes the death penalty for these crimes.”

Can you use that?

Corporate speak and weasel words.
These ratbags need to realise that they are running a police force, not a business.

Mick Keelty will be breathing a huge sigh of relief having taken timely retirement from the AFP.