You’ve got mail. Yesterday we sent out the weekly Squatter email, which gives those who don’t subscribe to Crikey a taste of what they’re missing out on. Not long after that we received a reply from none other than Scott Morrison — did the Social Services Minister want to sign up the whole government? Unfortunately, the auto-reply was not to subscribe to Crikey but to reiterate that Morrison does not believe gay people are entitled to the same rights as straight people when it comes to marriage. Yesterday’s email, you may remember, featured one article and one comment that discussed gay marriage — it seems Morrison gets emailed about the topic enough to have an auto-reply set up. If you’re wondering what ScoMo has to say, it starts like this:

“Thank you for your email regarding same sex marriage. You may appreciate I receive many emails from Australians in every corner of our great nation on this issue and I seek your indulgence to reply via email.

“Since entering the Parliament, and before, I have held very clear, consistent and public view supporting the current definition of marriage as a voluntary union for life of a man and a woman to the exclusion of all others. I have included links below to various speeches and articles where I have set out my position.

“You will also note in these statements that I also support the view that no Australian should have to pay a dollar more in tax or receive a dollar less in benefits or superannuation because of their sexual preference. During the last parliament laws were passed to give effect to this objective with the support of both major parties.”

So that’s that. But Scott, if you do want to subscribe to Crikey, we’d love to have you.

College ads continue. The reports about the ways in which for-profit colleges have been taking advantage of the unemployed by spruiking courses without fees and free laptops have become progressively more worrying. One tipster has told us that other colleges are using similar advertising practices:

“This is really disturbing; after all the exposes in the last weeks, this comes up in a Google search for someone in a TAFE.”

All in the family. We hear from a tipster that Anthony Albanese and Carmel Tebbutt are not the only power family in NSW politics. Says our tipster:

“Parramatta City’s veteran councillor Paul Garrard and his daughter Michelle will stand in Auburn and Parramatta respectively at the NSW election on March 28. They will run as independents, although they have already registered a new party called Our Local Community Party, which they will unveil at the next local government elections in September 2016. Paul Garrard, who has served 40 years on Parramatta City Council and was the city’s long-serving lord mayor, quit the ALP in 2004 when he was overlooked as a candidate for the seat of Granville. He has said he won’t preference new Opposition Leader Luke Foley, who is also standing in Auburn. Under mooted council amalgamations, Parramatta is due to be merged with Auburn and at least one, or possibly two, other Western Sydney councils. Michelle is standing for the seat of Parramatta to gain exposure for her own entry into local government politics carrying the flag of the family’s Our Local Community Party. She won’t be distributing preferences either. The Labor candidate is James Shaw, son of the late Jeff Shaw, who was a highly respected former NSW attorney-general and Supreme Court judge and died in 2010. Shaw is attempting to unseat sitting Liberal Dr Geoff Lee, who won in 2011 with an awesome 25.8% swing.”

Planning ahead. When ABC’s Mad as Hell’s fifth season launched four weeks ago, Shaun Micallef and his team had to rewrite much of the first episode, as a leadership spill threatened to engulf the government. According to members of the studio audience, they’ve been planning ahead ever since. At Tuesday night’s filming of last night’s episode, Micallef made a series of vague, non-specific jokes about who could possibly be leading the country now, which were not aired last night. Members of the studio audience were describing the experience as “highly surreal”, but Ms Tips understands everyone was mightily heartened to see the show’s spill clock finally strike zero.

Guess who’s back? He’s b-a-a-a-a-c-c-k-k! Andrew Crook is back on the header of Clive Palmer press releases, we noticed this week. Where you been, Crookey? We were getting worried. Was almost like you were kidnapped. 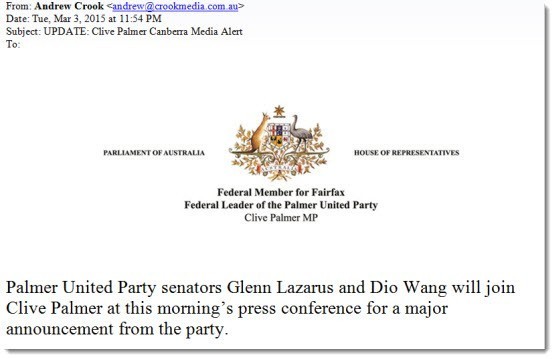 What a good joke. A books editor from one of the major newspapers has had his email account hacked, and the hijacker is sending out a series of malicious and confusing messages. That’s the conclusion one reviewer reached after receiving a message saying “Dear X, would you be able to extend your review by 200-300 words”. Ha, dumb hacker, sending out a message no editor has ever relayed in history.

Bring back pigtails. In ghosts of prime ministers past, Julia Gillard shared this photo with her social media followers this morning, showing she is adept at the art of #TBT (that’s Throwback Thursday, where one is supposed to post old photos of oneself). Gillard used the photo to draw attention to a petition related to International Women’s Day. 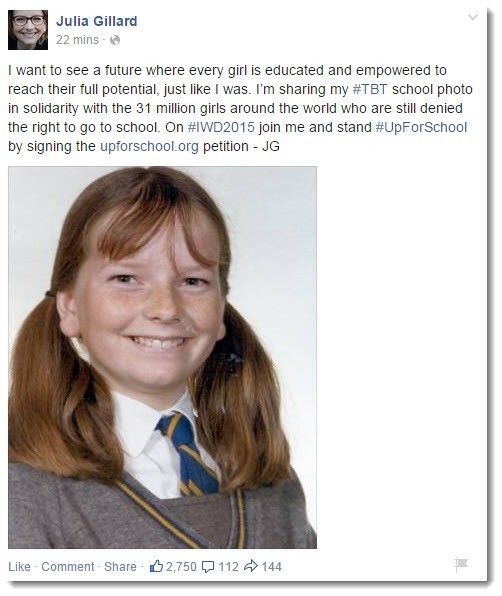 CLP in bed with the Eels, but how slimy are the sheets?

Morrison is whitewashing the past, most of the Coalition voted against financial equality for same sex couples. So much for the party of the individual.