Politicians have realised that a substantial change is needed on domestic violence policy. But we're so far behind on the issue we need to do the basics first. 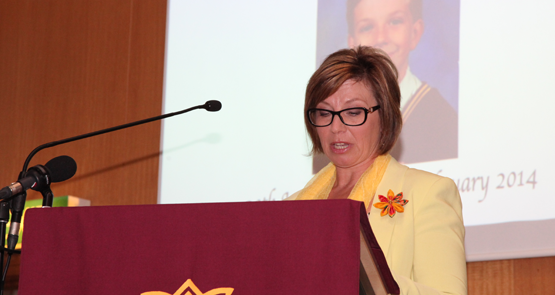 Rosie Batty speaks at the funeral of her son, Luke.

Much good sense has been spoken by politicians on all sides about domestic violence in the last 24 hours. But one of the challenges of addressing what the Assistant Minister for Women Michaelia Cash called the “scourge” of domestic violence is that it is unclear what a concerted national effort should target.

The consensus from politicians on all sides is that a business-as-usual approach to the issue isn’t good enough and that there needs to be significant change, most particularly in community attitudes itself. Cash announced a $30 million campaign aimed at exactly that. Nationals MP Andrew Broad compared the need for change in community attitudes to the change in attitudes to drink-driving and smoking. Bill Shorten wants a national summit on the issue to focus the minds of policymakers. Several MPs linked domestic violence to the wider problem of gender and economic inequality.

It is good that policymakers are talking about domestic violence, which claims the lives of dozens and dozens of women and children every year. We desperately need to sensitise ourselves to the issue, so that these deaths and injuries are treated with the same horror and outrage as the much smaller problem of terrorism. But we’re starting from a long, long way back in even understanding the basics of domestic violence. What is the current extent of domestic violence in Australia? In which areas and sections of the community is it better or worse? Is it increasing? Is the reporting rate increasing? What works to curb domestic violence? How is the criminal justice system treating perpetrators?

On the latter point, Cash suggests the answer is, poorly. Too often, she says, “the criminal justice response” is “out of line with community expectations”. The answer to the other questions are less clear. We know that indigenous women and women with disabilities experience higher rates of domestic violence. New South Wales crime statistics broadly suggest the reported incidence of domestic violence rises as income falls. Historically, around 70-100 women and children (and, occasionally, men) die at the hands of parents, partners or ex-partners across Australia every year, but we don’t have specific figures that we can track over time.

Similarly, we don’t really know what will work effectively in curbing male aggression toward partners and ex-partners. Domestic violence is about control and power, and thus needs to be understood both from an economic and an ideological viewpoint. But it’s not clear how to change male behavioural norms to make the minority of men who engage in domestic violence less likely to resort to it, beyond constantly repeating and reinforcing community disapproval. Focusing on men taking responsibility — the logic behind the White Ribbon campaign — is only the first step in an effective means of treating the problem itself.

One area where we do have solid information is in the provision of services and infrastructure to enable women to either escape abusive environments or have the perpetrators removed from them. Cuts to shelter services at the state level mean fewer options for women and children in escaping abuse, when we need to be offering more resources to victims; the NSW government (which is investing in more research on effective interventions) has almost entirely axed funding for shelters while the federal government has cut community legal aid funding. While we establish the evidence base to identify what we change male behaviour, we need more services and infrastructure for victims, not less.

Tony Abbott has said he’ll discuss Shorten’s summit proposal. He’s already established a Council of Australian Governments process for addressing domestic violence: Rosie Batty and former Victorian police commissioner Ken Lay were appointed to a panel to advise COAG. The problem with COAG is that it’s rarely anything other than a policy graveyard where issues can be taken until they fall off the political agenda — that’s what happened with housing affordability under Labor, for example. But it’s unclear exactly what Bill Shorten’s national summit would do, either.

We need to significantly and rapidly improve the evidence base for the prevalence of domestic violence and what works in altering male behaviour, while providing more options for victims to escape abusive environments or have perpetrators removed and forcing police and courts to take the issue more seriously. It will cost a lot of money. But given we can find billions to spend on addressing terrorism, which kills a tiny fraction of the number of victims of domestic violence, any rational assessment of priorities would find the money.

For women, terrorism begins at home.

Imagine how many lives we would save if the budget used for intelligence and security was directed to dealing with domestic violence.

Society appears to be increasingly violent. From a very young age children are exposed to violence on TV & aggression in sport.Not to mention the language of sport where words such as decimate, crush, smash, annihilate, wipeout, thrash etc are tossed about as commonplace.

Desensitization to violence is prevalent via our language & televised visuals.

But I can’t abide a man hitting a woman, or threatening to, or the psychological terror of living with a man who is so unstable that a woman lives in fear.

And my son will grow up with the same values, and I can only hope that I have the courage to intervene when I see it.

Isn’t it about time all the hand-wringing and tut-tutting stopped and we asked ourselves: “How did it come to this?”

How is it that a minor proportion of men in this country (and it’s not much different in other [so-called] developed nations) feel they have no option but to lash out when their relationships break down? No child unfortunate enough to be born male is like this at birth: there is therefore something very, very, very wrong with the way we treat boys and young men that some of them become brutalising bastards.

Please, please, please stop blaming men and start digging around to find the causes. While we’re at it, perhaps we might also find connections with male suicide rates (4 times that of women), depression, and incarceration rates (vastly greater than women). Why is it that more than 90% of deaths and serious injuries in the workplace are male? I think there’s a pattern emerging….