Jodi McKay is taking on sitting Liberal Charles Casuscelli in Strathfield, and the result could be predictive of the state election as a whole. 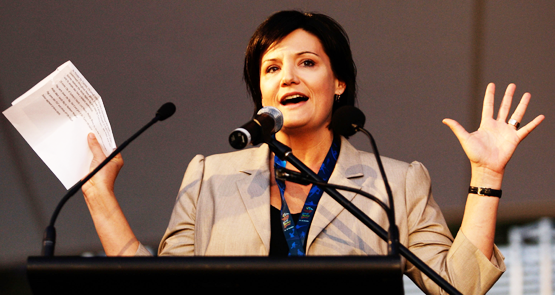 Like prize bantams in a cockfight, the two major parties are squaring off against each other in the middle-class, middle-brow electorate of Strathfield, midway between Sydney CBD and Parramatta.

The former Labor seat is now Liberal-held and looms as one to watch on March 28. The result will show the size of the swing for or against Premier Mike Baird’s Liberals, or whether voters have decided to give another chance to Opposition Leader Luke Foley’s rebranded ALP.

Strathfield’s transition from Labor to Liberal in 2011 was in line with its upwardly mobile demographic and the influx of Chinese, Korean and Indian professionals willing to pay $800,000 to $1.2 million for suburban homes and apartments.

In this election, Casuscelli is being challenged by Jodi McKay, who was installed in the seat by former opposition leader John Robertson, after evidence was given to the Independent Commission Against Corruption that two Labor heavyweights, Joe Tripodi and Eric Roozendaal, had white-anted her re-election campaign in the seat of Newcastle.

McKay, a former TV host, was originally parachuted into Newcastle by Labor’s Right wing in 2007, and she is now contesting Strathfield after yet another parachute drop.

Her head-office selection destroyed the hopes of two high-profile local candidates — Daniel Bott, the 33-year-old mayor of Strathfield, and John Faker, the mayor of neighbouring Burwood, which falls within the seat’s boundaries.

Although the peeved former candidates have expressed support for McKay, Crikey has been told that some branch members are so disappointed, they have decided not to campaign for her.

To boost her profile and credibility among voters, Labor’s new leader Luke Foley elevated her to the shadow cabinet as planning spokeswoman. The gesture was unprecedented; no one can recall a candidate joining the shadow ministry without having a seat in Parliament.

However, the promotion has attracted widespread media attention, and McKay was on stage at Campbelltown Catholic Club last weekend to introduce her leader at the official ALP campaign launch.

“But belle of the ball was Strathfield candidate and former Newcastle MP Jodi McKay, whose tearful appearance before the Independent Commission Against Corruption has turned her into Labor’s Joan of Arc.”

In the 2013 redistribution, Strathfield’s boundaries were redrawn, disadvantaging the Liberals and giving Labor an estimated 6% edge. This creates an uphill battle for Casuscelli, who finds himself facing a media “star” with sympathetic support among female voters.

To protect his majority, the first-generation Italian migrant who arrived at Circular Quay in 1963 at age five has knocked on doors street-by-street all over the electorate.

An ex-Blacktown Boys High School student with technical and management experience, Casuscelli knows that he is in the running for a ministerial portfolio if he can retain his seat.

In most federal and state elections, one or two seats become battlegrounds between the two major parties. At the last federal election in September 2013, they were Kevin Rudd’s seat of Griffith and Wayne Swan’s seat of Lilley, both of which the Liberals were desperate to win to avenge former prime minister John Howard’s loss in Bennelong in 2007. Sadly for the Coalition, Rudd and Swan were both re-elected.

In the last state election, the Liberals concentrated money and resources on key western-Sydney seats such as Parramatta, Granville, Londonderry, Riverstone, Smithfield, Mulgoa and Campbelltown, and won all of them.

Strathfield has become a test of strength with immense sums of campaign money, personnel and advertising being poured into the electorate by both sides.

What’s it all about? Vanity, ambition, one-upmanship and symbolism rate highly, while public policy and community interest are rarely evident.