Cliev! No! Clive Palmer has been very quiet lately, before he lost his dinosaur Jeff to a fire on Monday night (rex in peace, Jeff). Maybe he realised that with the government’s leadership tensions as they were, even his side shows wouldn’t get any attention — that is until today. In a press conference about his opposition to the government’s higher education package, Palmer came out with this:

Yes, he really went there. Standing behind him senators Dio Wang and Glenn Lazarus didn’t seem quite so comfortable with this line, and after questioning from The Guardian‘s Daniel Hurst about whether it was OK to say such a thing, he backed up saying he meant “political suicide”:

“Because it’s not a debate … I would raise it because its suicide, political suicide, to go against the will of what’s good for the Australian people.”

For future reference Clive, perhaps not every single bon mot that pops into your head is worth saying on national television — or anywhere.

If you need support, there is help available by getting in touch with Lifeline: 13 11 14 www.lifeline.org.au or the Suicide Call Back Service: 1300 659 467 www.suicidecallbackservice.org.au.

Women’s Day at men’s club. It’s International Women’s Day on Sunday, which means that political parties all over the country are having lunches and breakfasts to mark the occasion and show just how progressive they are. But the LNP in Queensland seems to be struggling with the concept:

“The LNP in Queensland are holding an International Women’s Day Lunch at the Tattersalls Club in Brisbane (a men’s only membership club). Are they taking the piss?”

We’re not sure if they’re taking the piss, but the lunch is going ahead at the club on Friday — and yes, the Tattersalls Club only allows male members. While the website says that partners and families of members are welcome, we hear that it’s just lip service and it’s rare to see a female patron in the venue. The regulars will get a shock on Friday won’t they?

Scaring the horses. We hear things are heating up in the race for the NSW seat of Port Stephens, where both the Liberals and Labor are running candidates after the retirement of Craig Baumann, who lost his Liberal endorsement after being drawn into the Independent Commission Against Corruption developer donations investigation. Our tipster says campaigners are resorting to late-night outings in order to gain the upper hand:

“… with Liberals getting supporters to trespass on private properties in the middle of the night to steal ALP campaign signs and risk spooking valuable horses and endangering the lives of drivers if horses break through fences and get onto very busy roads as happened here not long ago, the polls must be looking bad for them if they have to break the law to try and get a political advantage.”

We called Liberal candidate Ken Jordan to ask if he knew about the missing signs, but didn’t hear back before deadline. We did notice that he had posted on his Facebook page that he was also asking for information about missing signs, saying that one had been taken down near his place on Monday night. Seems that two can play at that game.

On the edge of our seats. Which is it, Joe? Perhaps Treasurer Joe Hockey is spooked by increasing press coverage of how he has politicised the Intergenerational Report, especially after Fairfax’s Peter Martin gave him a fearsome touch-up yesterday. Having declared a few weeks ago that the report, released tomorrow, would make Australians “fall off their chairs”  in shock at the prospect of endless deficits, Hockey yesterday changed his tune, telling Phil Coorey “We’re not using this to shock people. What we are trying to do is be positive.” Back on your chairs, everyone.

Nats in Indi. The seat of Indi seems to be causing quite a fuss in the Victorian Nationals, as they gear up to take on both Cathy McGowan and the Liberals in next year’s election. The Border Mail reports that two high-profile members of the Nationals that were vocal supporters of McGowan’s campaign against Sophie Mirabella have been under pressure to leave the party. Tammy Atkins and Ken Jasper were named in a point of order at the Indi federal electorate council annual meeting in Wangaratta last month that said they should be kicked out of the party. Atkins has left, according to The Border Mail, but did she jump or was she pushed? Meanwhile, the numbers are firming that Senator Bridget McKenzie will move from the upper house to try to win the seat for the Nats next year. Indi-watching will continue to be a spectator sport for political junkies across the country.

Which way up? On page 3 of today’s NT News the Aboriginal flag is shown flying outside the offices of the local council Galiwin’ku, where people are still recovering from the effects of Cyclone Lam. For the NT News the flag is a “symbol of unity”, but unfortunately this flag is flying upside down, which is generally considered as desecration of the flag and a grave insult. In 2007 a similar occurrence at Griffith in New South Wales caused “embarrassment and anger” after the Aboriginal flag was flown upside down on Australia Day.

It could be that the good citizens of Galiwin’ku are flying the flag upside down as a symbol of distress, a common practice in some countries, but not seen before in Australia. Attempts to clarify the situation with the East Arnhem Regional Council before going to press were unsuccessful, understandable as many of the communities in the region have been “smashed” by Cyclone Lam. 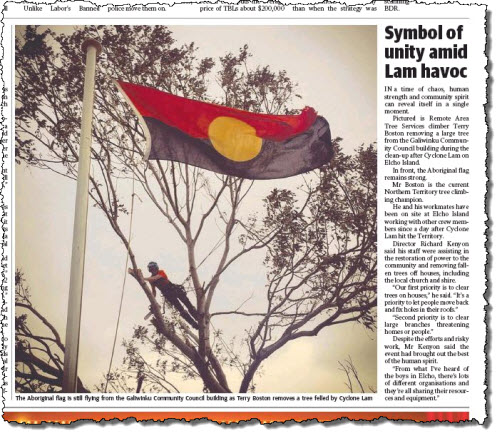 PEBCAK. MPs and senators found their inboxes full of messages from constituents (quelle horror!) on Monday after some websites revealed that they had connected their official email addresses to their iMessage accounts on their iPhones, allowing anyone who has an iPhone to send them messages and even to impersonate Education Minister Christopher Pyne. Yesterday the Department of Parliamentary Services Helpdesk sent out an email with a helpful PDF explaining how to disable the function or only allow certain contacts to use the function. Of course, the email and the document quickly leaked to members of the media. When Ms Tips went to have another look this morning it appeared the PDF had disappeared from the staff portal. Now we’re worried about any MPs who missed the memo — will the next one be “how to save a PDF”? 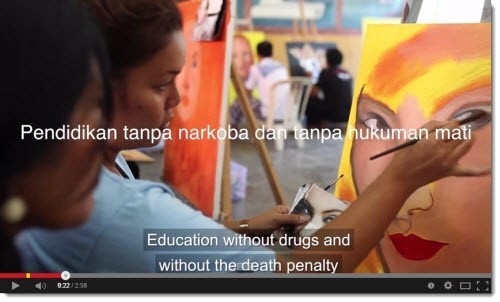 Does anyone pay ANY attention to anything Joe Hockey says these days?

I tried listening to QT during my lunch break Susie … I’m poorer for the experience. Hockey seems ill-suited to public speaking.

Smokin’ Joe Levety & Abbotrocious are inextricably linked to each other until death or demotion do them part.
A shotgun wedding started things badly and they clearly loathe each other for serial betrayals but they’ll all go together when they go.
Good riddance.