Australia's return to Iraq will make us less safe, and is based on a lie. Again. 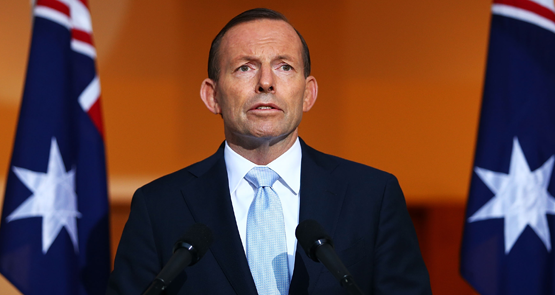 There aren’t enough flags in the country to cover the dangerous stupidity of Tony Abbott’s decision to send Australian soldiers back to Iraq. And like our last trip to Iraq, it’s based on a lie.

As Crikey predicted last year, Australia’s decision to participate in the US-led campaign against Islamic State (also called ISIS or Daesh), via aircraft and special forces troops, increased the threat of domestic terrorism to Australians, with tragic results. That’s despite the bipartisan efforts to paint terrorism as somehow nebulously inspired by our “freedoms” and despite government efforts to gag police from discussing the link between our role in Iraq and the rise in homegrown jihadist terrorism.

Deepening our role in Iraq will only perpetuate and increase the threat to Australians, in addition to placing our troops in harm’s way, no matter how much we are assured they will be “behind the wire”. Moreover, it’s exactly what the Islamic State wants, a point well made by Tom Switzer yesterday: the very purpose of the endless series of IS outrages, and their very theatricality and adept use of media, is intended to encourage western politicians to abandon a rational assessment of what is in their national interests and plunge back into Iraq, thereby supporting the IS “crusader” narrative and outraging extremists in Western countries.

Training Iraqi forces is a fool’s errand. As we showed yesterday, any number of countries spent tens of billions training the Iraqi Army after the US so cavalierly disbanded Saddam Hussein’s military force in 2003. As the rapid successes of IS irregulars demonstrated, all that effort and money was a complete waste. But what Iraqi security forces are good at is torturing, murdering and raping Sunni prisoners. It was the US-trained “elite” security forces controlled directly by former Iraqi prime minister Nouri al-Maliki that ran their own prisons in which mostly Sunni prisoners were brutalised, according to multiple human rights reports.

Any military success by the Iraqi Army against IS will inevitably lead to atrocities against Sunni civilians, perpetuating the sectarian conflict that the West helped unleash in 2003. Such attacks will go beyond deplorable but understandable revenge attacks within local communities and encompass officially sanctioned mass killings of the kind that have already been reported about Iraqi forces. Even if IS is militarily defeated (though the planned effort to retake Mosul has been pushed back until later in the year), the sectarian war will go on, and new groups will emerge to carry it on.

Yesterday, Tony Abbott responded to a question about why the decade of Western-funded training of the Iraqis had failed by adopting the standard Republican attack on Barack Obama, saying “it was only very late in the previous involvement with Iraq that a serious effort was made to train the Iraqi armed forces and my understanding is that the Americans then pulled out with the job, at best, half done.”

This is an easily disproven lie — and quite apart from the timeline of allied training efforts, we can quote none other than John Howard. Australia, along with Britain, the US, Iran, South Korea, Jordan, Israel and Romania — among others — helped train the Iraqis after 2003. “Training and mentoring Iraqi forces has been a key element of Australian support for Iraq ever since 2003,” Howard said in March 2007. “The Australian Army has been involved in the basic training of more than 12,500 Iraqi soldiers.” A month later, his defence minister Brendan Nelson echoed him exactly, adding “despite the dangers, real progress is being made in southern Iraq”.

Whom to believe — John Howard, or Tony Abbott?

Then again, we’re used to being lied to about why we’re sending troops to Iraq. At least Howard had the justification that it was early in the war on terror, and the Americans were putting enormous pressure on their allies to legitimise the Bush-Cheney venture in Iraq by participating. Tony Abbott has no such excuses: instead, terrorism is one of the few cards left to play for a leader facing a determined effort to oust him by his own party.

Nor is this a standard political lie of the kind that is hard currency in Canberra. This is a lie that will make Australians less safe, just as the original lies about Saddam’s weapons of mass destruction made Australians, and the British, and Americans, and Spaniards, and all citizens of countries who joined the attack on Iraq, less safe. Australian lives have already been lost because of our reckless involvement in the latest Iraq venture. Sending more troops increases the chances of more lives lost to domestic terrorism.

But then that, of course, would be used to justify even deeper re-engagement in the debacle we created in the Middle East. That’s the dominant characteristic of the war on terror — it is self-reinforcing, and permanent.

Keane: Australian neocons on the march back to Iraq

Glad to know I am not the only Australian insulted by the Prime Minister’s disgraceful over use of the flag for his partisan political purposes. Wrapping himself in the flag as he done for the last few announcements is more like Captain America than the true understaed patriotism of Australians.

True patriotism doesn’t need symbols it is deeds that matter.

As you point out we are going to war on yet another lie. The only security consideration is the PMs job security.

This deployment is yet more right wing chest beating Islamophobia that will only worsen the situation.

I have yet to hear any one give any evidence that ISIS is a threat to Australians in australia. Sure a couple of looney locals have used it as an excuse but the reality ISIS has no interest or capacity in Australia and it is only by being talked up by turds like our PM that they have any relevance.

If people in other countries want to war then so be it. It is their country not ours and not our business. Meddling in civil wars has never ever worked and it won’t work now.

Just imagine if Bush?Howard?blair had not invaded Iraq what the current position would be?

Many thousands of lives saved and untold wealth not wasted and far less instability.

This latest adventurism by our PM is just going to make matters worse and suck more and more troops into a conflict that cannot be resolved by external influences. That the ALP is to spineless to fight this new Vietnam is a blight on them.

This is further evidence that our Islamophobia is leading to some sort of collective madness.

what a total crock of shit Bernard. The deluded bias of you and the Pav is breathtaking. I assume you are happy to sit back and applaud the continuing atrocities perpetrated by ISIS (beheadings and mass murder being the tip of the iceberg). Your silence in suggesting an alternative is deafening. You’re pathetic.

Agree with The Pav’s final sentence.

It appears to be the rule that anyone draped in the Oz flag is up to no good.

Abbott has used his standard abysmal judgement to pour fuel on the fire. Our captain seems determined to endanger our ship.

meanwhile isis conrolled areas in syria have doubled in recent months, it’s really only a matter of time before abbott claims australian troops have to go into syria. but i really doubt abbott has even a shred political aptitude to handle that shark pond.

btw, iraq’s army is now joining with iran to launch attacks on isis without the knowledge of the foreign forces. this really is a dogs breakfast and i don’t think abbott is up to the task handling this, he’s done really nothing short of barking “die-eesh death cult” every five seconds