Sorry the most expensive word: Age apologises in front-page splash

Fairfax has issued a possibly unprecedented front-page apology to the Melbourne teenager the paper misidentified as a terrorism suspect.

In a break with normal newspaper practice, The Age has today used its front page to apologise to Melbourne teen Abu Bakar Alam, after it used a photo of him taken from Facebook to illustrate a front-page story on Numan Haider, a Melbourne teenager who was shot dead by police last year after attacking an officer with a knife. The extensive, front-page apology is highly unusual for an Australian publication — it’s a recurring point of contention of critics of the press, including the Press Council, that apologies in the media are rarely given the same prominence as the original mistake. The wrong photo was carried in The Sydney Morning Herald and The Canberra Times as well, but The Age has featured the apology most prominently. 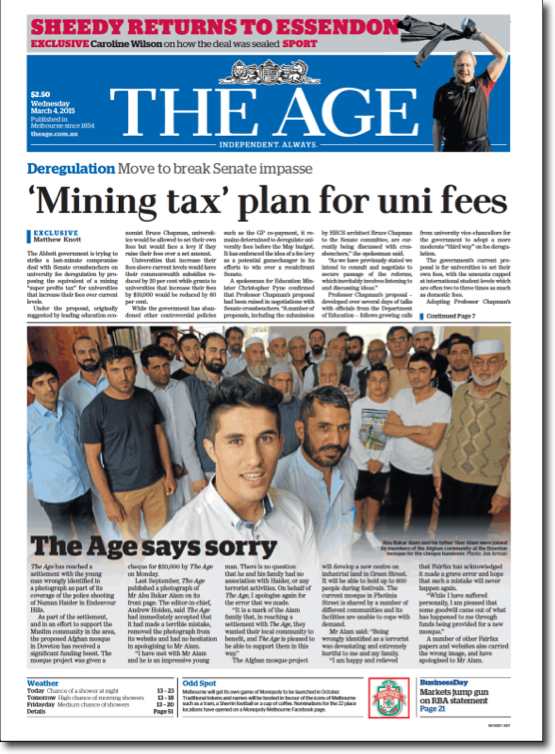 Alam’s legal representation Slater and Gordon said it was part of the settlement Fairfax reached with the family, which also included a $20,000 donation to help build a new Afghan mosque in Doveton, and an undisclosed amount in damages directly to Alam. Slater and Gordon also says Age editor-in-chief Andrew Holden has written a letter to the Acting Chief Commissioner of the Victorian police force about the incident, given Alam wants to become a police officer. Another letter was also sent to the Afghan community apologising for the mistake.

Alam’s lawyer Jeremy Zimet told Crikey this morning that while the front-page apology was unusual (“an Australia first, we believe,” he said), it was necessary to restore his client’s reputation.

After the original photo was published, Fairfax papers carried an apology on page 3, and Fairfax’s lawyers argued this was sufficient. “But that was never going to be acceptable to us,” Zimet said, adding that a front-page apology had been Alam’s principal request from the moment he sought legal representation.

While Fairfax papers in Sydney and Canberra also carried Alam’s image, Zimet said the greatest reputational harm to his client was in Melbourne, where he lives. The relatively speedy settlement (only six months from the incident) was also intended to quickly repair his client’s reputation.

Holden delivered the letter and an apology to members of the Afghan community in Doveton mosque on Monday. This morning, he declined to comment further on the matter when contacted by Crikey. He is quoted in the front-page apology saying:

“I have met with Mr Alam and he is an impressive young man. There is no question that he and his family had no association with Haider, or any terrorist activities. On behalf of The Age, I apologise again for the error we made.”

In a statement to media, Zimet said the case was an example of extreme defamation:

“Budget cuts and a 24 hour news-cycle undoubtedly put pressure on journalists and publishers. But that does not relieve media organisations of their obligation to ensure that the stories they publish are accurate – particularly around issues such as terrorism.”

“Mr Alam was incorrectly associated with terrorism on the front pages of three prominent city newspapers, in two local newspapers, and on the internet. The publication was extremely defamatory and the settlement should serve as a reminder to all media outlets that they have an obligation to get it right.

“While it is inevitable that journalists will source information from social media, this case demonstrates the risks involved in using such information, and the need to carefully verify its accuracy before publication. Fairfax used a photograph of Mr Alam that had been put on Facebook. Mr Alam does not have a Facebook account, and had no way of asserting any control over who viewed or accessed this image.”

The statement also included comments from Alam, who said the publication had been devastating for him and his family.

“We came to Australia as Afghan refugees eight years ago because we wanted a better life. We came here to escape terrorism and to live in peace. We are in no way connected to any terrorist group. This whole incident has been very distressing, but I am grateful that as part of my settlement I was able to give back to my local community through a donation that will go towards building a new mosque.”

A quick search this morning could find no other front-page retraction run on an Australian newspaper in recent history, though worldwide several other newspapers have apologised prominently. In 2003, for example, the New York Times ran a grovelling front-page apology after discovering a pattern of “journalistic fraud” in articles written by Jayson Blair, one of its former journalists. Other papers to publish front-page apologies include Le Monde and Britain’s The Independent.