Lynton Crosby is pulling out all the stops for the Tories in the UK. And, in this case, the stops include xenophobic dog whistles and taking on the teachers. 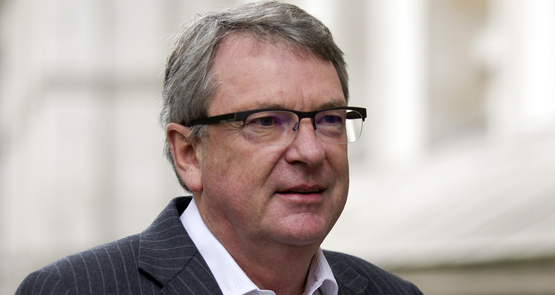 Apology to Lynton Crosby
In a 4 March version of this article, Guy Rundle described the campaign being run by Mr Lynton Crosby for the Tory Party as involving racism. Crikey and Guy Rundle accept that this description is without foundation. It has been withdrawn. They apologise to Mr Crosby.

Garrrrrgghhhh morning and BBC Radio Four’s Today snaps you awake. “That was the Archdeacon of Cirencester with Thought For The Day. Coming up, a theatre director named Dominic who blew our producer at Cambridge. But now, Prime Minister David Cameron has promised up to five years in prison for teachers and social workers who fail to report child sex abuse …”

There you go. Britain, Britain, Britain … and Lynton. Yes, Lynton Crosby, the Lizard of Oz — I know that’s Keating, but it fits him better — is going to work. With 69 days until the UK general election, and the Tories running a stubborn two to three points behind at around 31% to Labour’s 32% to 34%, the campaign team has taken over the legislative agenda. The close polls conceal a major problem for the Tories since Labour has a three-point bias in its favour, due to the lack of redrawn boundaries.

Labour has problems of its own, with the Scottish National Party likely to take between 20 and 35 seats of the 50 Labour currently holds north of the border. The Greens have also been running at around 7%, which could nip at about 15 marginal seats Labour could use. However, the Greens may take a dip because of a disastrous interview done by Australian-born Greens leader Natalie Bennett on London radio last week — and the follow-up, in which the Greens rep in the House of Lords shielded Bennett from any questions about her poor performance (being utterly unable to answer costing questions about the party’s affordable-housing policy, while doing a passable imitation of someone drowning). However, that might have helped — since Bennett gave such as an unvarnished mea culpa that she sounded real and human.

The Tories’ big problem remains the UK Independence Party, running at around 15% by some polls, and they have to get about a third of that back. It may shrink anyway as the poll gets closer, but they have to be certain. The Tories are double-blocked — even if they get more seats than Labour and get first shot at forming government, they’ll be unlikely to get there. The SNP will never join with them, UKIP will get five seats at most, and the Lib Dems will be down from 58 seats to around 20 or so. The most likely result is a three-party Labour-SNP-Lib Dem coalition. The Tories would be scrabbling to pull together the Tories, the Lib Dems, and the Democratic Unionist Party, the damn nutso Northern Irish proddies, with UKIP support.

So they have to go all out, and Crosby has a free rein. The sudden enthusiasm to tackle child abuse has nothing to do with Gary Glitter’s third conviction (he’s going away for 16 years), but the report into vicious sexual exploitation by gangs in the northern city of Rotherham, and in the Thames Valley outside London. In both places, gangs of men, mostly of Pakistani origin, preyed on groups of girls around 13 years old, most of them in care homes or foster care. They were turned out for prostitution — groomed, as the expression is — in a process that went for years.

Both cases showed all the authorities at their worst; sexist, ignorant police and beaten-down or burnt-out social workers and teachers. Such cases are tough because the girls form bonds with the men who rule them with a mix of attachment and violence, and often won’t testify against them. But even those who wanted to were ignored and disparaged. It’s an appalling story, and there is no question that a mix of police thuggishness, deep-rooted misogyny and a remnant dash of “community” multiculturalism combined together in a toxic brew.

It’s also one capable of supplying a veritable pan pipe of dog whistles for the Tories. The police have been largely let off the hook, though they are the most to blame. But the idea of jailing teachers and social workers is a sweet sweet thing to Daily Mail readers who may be wavering on what a pink-goo-in-a-suit wimp David Cameron is. Even better, it’s also a way of attacking brown people without being explicitly racist. As a three-fer, it has a feminist frisson, which might attract a few Liberal Democrats.

That and a renewed attack on the illegal migrants who try and make it across the Channel hanging onto trucks has all the hallmarks of loathsome Lynton. The question is whether it will work, and one might suggest that it’s not only Cameron’s rep that’s on the line. Crosby is credited with getting Boris Johnson elected as mayor of London, but it’s far from clear he made a huge difference. In 2005, he ran a disastrous campaign for then-Tory leader Michael Howard, heavy on anti-immigrant xenophobia, which alienated not only swinging voters but core supporters. It was a disastrous misreading of differing political cultures, but shoving a dumb fuck like Boris down the throat of a left-wing city like London has, correctly or otherwise, convinced the Tories that Crosby can do no wrong.

The other question is whether Crosby himself misreads the mood of the UK — indeed, whether he’s simply a bit of a prick who projects a nasty, persecutory tone onto any situation he encounters, and now has a client base venal enough to welcome that. The whole child-welfare system needs an overhaul, but the idea of threatening teachers with prosecution if they miss a vulnerable kid is demented and counterproductive. A lot of people are teachers, or are related to them, and they vote. It’s a move that could backfire quite spectacularly. Maybe Crosby has nothing to do with it, but I doubt that. The Tories don’t have the willpower to be arseholes at the moment, which is why they’re importing Australian experts to do it for them.

Well, we’ll find out. Give it a couple of weeks and Today will be announcing “an interview with the Duchess of Devonshire, the last Mitford, she’s dead but she’s still with us. And now to Britain’s new internment camps …”

Lynton Crosby and the Tory slide in Britain

i’ve read the piece back and you’re right. I’m shocked, shocked to find that I am not in fact neutral

For a bit of light relief you might give Klegg (an oop norf dialect word for a blood sucking insect) a bit of your well bloodied stick – he just came out with a no prison for drug users, get them into treatment away from the evil people who supply them, shift enforcement to Health away from Plod (not clear if that is a reference to evil suppliers) and put cannabis of the medical list.
It has long been obvious the creature had no shame but now it’s clear the brain has taken leave of absence as well.
Then there is the Millipeded, too grotesque to parody – makes Boil Shlernt sound in touch.

@AR
“no prison for drug users, get them into treatment away from the evil people who supply them, shift enforcement to Health away from Plod (not clear if that is a reference to evil suppliers) and put cannabis of the medical list”

I don’t care who suggested them- but is this supposed to be bad?

You do know that all these suggestions have the advantage over the status quo of actually working whenever they have been tested?