Isentia Index: the phoney war inside the government confuses everyone

Australians are tiring of leadership speculation as the media continues to stoke the flames.

Unsurprisingly all the focus remains on the three that are deemed to be the key players in the federal Liberal leadership saga, with the prime minister well over 50,000 items, main undeclared challenger Communications Minister Malcolm Turnbull over 20,000 and the now reportedly certain third candidate, if push comes to shove, Foreign Minister Julie Bishop, not far behind.

The recent strong polling rebound for the government has much of the commentariat bemused, as most had been counting the minutes, let alone days, until the next open challenge on Tony Abbott’s leadership. Some even postulated that the electorate already think Malcolm Turnbull is the Prime Minister, but whether survey respondents are really paying that much, or that little, attention is debatable.

Meanwhile the other four men who might be most affected by any change in leadership were next in the list, NSW Premier Mike Baird desperately hoping for some clean air as his government’s poll numbers start to slide in the last few weeks of the election campaign despite his personal popularity, Treasurer Joe Hockey is now tied to the PM’s future, while Social Services Minister Scott Morrison is tipped to take his place. Opposition Leader Bill Shorten is starting to face more pressure to build a policy profile rather than sticking to small targets. 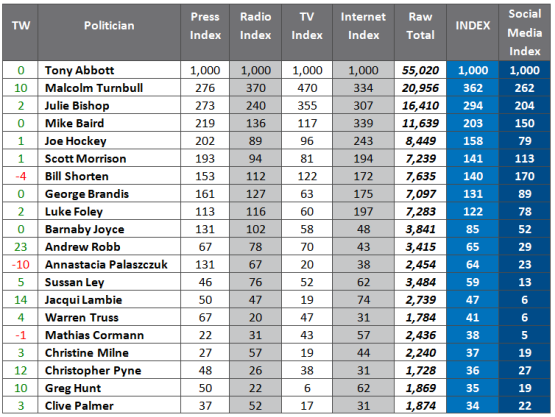 The polls may have moved on, but on talkback the leadership question is still very much alive, with both Malcolm Turnbull and Julie Bishop having their share of detractors.

The PM slips back under six figures (just) as some of the momentum was taken out of many left wing commenters joy at what they expected to be the imminent demise of Tony Abbott.

He wouldn’t be the first Australian professional footballer to go on to play NFL, but the rest have been punters, so there’s a lot of interest as to whether Jarryd Hayne can break into the main part of the sport as a running back now that he has signed a deal with the San Francisco 49ers.

iSentia index: Victorian Parliament stumbles on while Abbott stays in the limelight