Baird backed the wrong horse, but will it cost him NSW?

NSW Premier Mike Baird has bet it all on privatisation. Unfortunately for him, voters seem to hate it. 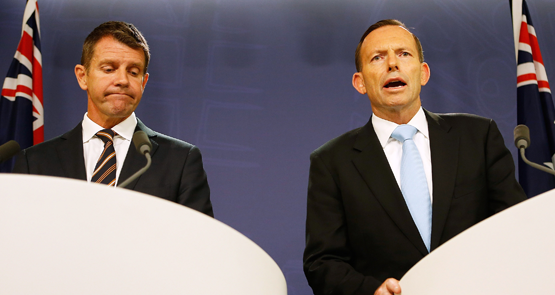 Three weeks to polling day, and most New South Wales voters still remain stubbornly uninterested in the state election and what the major parties have on offer.

According to political veterans there is a simple answer to the yawning indifference in the electorate: voters remain absorbed by the terminal misfortunes of Prime Minister Tony Abbott.

They are glued to the ongoing Canberra sitcom, which, depending on your political temperament, is either a version of The West Wing (US), The Thick Of It (UK), Rob Sitch’s The Hollowmen (Australia) or a combination of all three.

Ask pollsters what is likely to happen in NSW on election day on March 28 and they will do an imitation of former US defence secretary Donald Rumsfeld, who once said: “There are things we know we know [but] we also know there are known unknowns [and] also unknown unknowns.”

What we do know is that if Premier Mike Baird had gone to the polls last November — he couldn’t because NSW has fixed four-year terms and the election is always held on the last Saturday in March — he would have obliterated John “Robbo” Robertson’s Labor opposition.

However, he and the NSW Treasury were seduced by Abbott, federal Treasurer Joe Hockey and the federal Treasury into accepting a rotten deal. NSW would receive additional Commonwealth money to build specific infrastructure (roads) if it started a privatisation crusade.

A similar deal was offered to Victorian premier Denis Napthine and Queensland premier Campbell Newman. And we all know what happened to them — dumped after one term in office and replaced by Labor Premiers Daniel Andrews and Annastacia Palaszczuk respectively.

Naively, Baird and his Treasurer Andrew Constance jumped into the Faustian pact with Abbott and set out their re-election strategy: we’ll sell 50% of the power industry’s poles and wires to the private sector for $20 billion and spend the cash on infrastructure including roads, tunnels, schools and hospitals.

After the catastrophic election results in Victoria and Queensland, Baird found that it was too late to change course. He was committed to an election campaign based on privatisation to fund infrastructure, knowing that it was like trying to sell frozen rat dumplings from China.

What we also know is that 1) Labor dumped its leader John Robertson and chose Luke Foley as his successor, and 2) the ALP jumped in the polls.

The ABC’s inestimable election analyst Antony Green has drawn a parallel between now and 1991, when Liberal premier Nick Greiner faced electors for the first time after the Coalition’s landslide victory in 1988.

In his campaign launch speech, then-opposition leader Bob Carr took aim at Greiner’s pathological commitment to privatisation, saying: “Our Labor government will halt the rush to privatisation. It is only by voting Labor that the people of NSW can say, ‘Hands off the GIO. Hands off the State Bank. Hands off the people’s assets.” The faithful roared their approval — just as they did at Campbelltown last Sunday when the current ALP leader, Luke Foley, gave a very similar commitment.

Greiner failed to respond adequately to the outrageous scare campaign mounted by Carr and his minders, who included Bruce Hawker. The Labor leader repeatedly claimed that Greiner would impose a consumption tax and led TV cameras through supermarkets saying: “A consumption tax will fall on everything. Shoes, haircuts, bread, toilet rolls, the works.”

When the votes were counted, Greiner’s Coalition had lost 10 of its 59 seats giving it 49, one short of a majority. A resurgent Labor gained three seats giving it a total of 46. Four independents — John Hatton (South Coast), Clover Moore (Bligh), Dr Peter Macdonald (Manly) and Tony Windsor (Tamworth) — held the balance of power.

Within a year, Greiner had quit because of an adverse Independent Commission Against Corruption finding (later overturned by the Supreme Court), and Labor was on track for a return to power in 1995.

The parallels between now and 1991 don’t take account of the damage done to Greiner’s government by maverick education minister Terry Metherell, the Nationals’ involvement in North Coast development scandals, the overly extravagant election campaign run from Sydney’s five-star Regent Hotel, and the cold personality of Greiner himself.

By contrast, Baird comes across as an easy-going, regular guy who doesn’t campaign by helicopter (as Greiner did) but by bus, train and ferry.

Nevertheless, the amiable Baird is certain to regret ever making privatisation the front and centre of his election campaign. Just how hard he will be hit is, as Rumsfeld would say, a known unknown at this stage.

lol the photo …could almost feel sorry for Mike – but I won’t.

Baird is demonstrating the standard reaction to a captain’s call.

Just a few observations.
1: I attended a council sponsored meeting in Western Sydney re. amalgamations. All the candidates there to give their policy on amalgamations, including 2 sitting LNP (one crucial LNP member couldn’t make it, which caused some grumblings amongst the anti-amalgamation audience). Of course, the LNP were against amalgamation (and, I daresay if pressed, CSG mining, privatisations and anything else that would get them a vote).
Of course they could’nt give a satisfactory answer to, if the LNP wins, where they will then stand on the issue; hypocrites!
2. Whose paying for the Libs..again Western Sydney marginal LNP electorate. I see a local bus fully sloganeered with the smiley LNP member and in the LNP colours…who much did this cost??? The locals not happy with the sitting member; former labour seat; as he is big on over-development and looking after developers and destroying the character of the area.
Very interesting election.

This effort was much less biased towards the LNP, Alex.
Bravo! It wasn’t that hard, was it?
A little bit of truth in journalism is a refreshing change!