Why we should let cyclists take over the roads

What to do about the problem of cyclists getting doored? Separated bike lanes are one solution, but they won't work everywhere. Perhaps more drastic measures are required ... 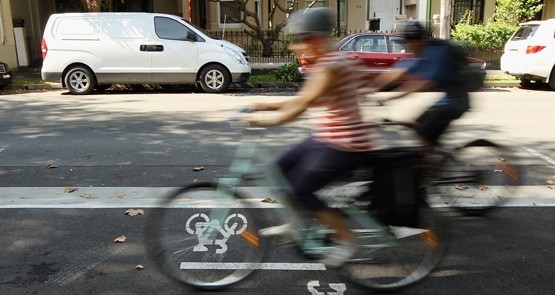 According to media reports, Italian visitor Alberto Paulon collided with a car door while cycling in Melbourne this week and was run over by an overtaking truck.

There was plenty of anger on social media following the incident and calls for the motorist allegedly responsible for the dooring to be severely punished (including doing “jail time”).

The state government announced it would convene an emergency meeting of relevant agencies in response to Paulon’s death. Greens leader Greg Barber called for a campaign to raise awareness of the risks associated with dooring.

Dooring is a traffic offence in Victoria, but that doesn’t stop it happening. There are around 110 reported cases every year in the state, and no doubt many more undocumented incidents and near-misses. There aren’t many deaths from dooring, but well-publicised incidents like this one deter prospective cyclists from taking to the roads. It reinforces the more general perception that cycling on roads is very dangerous.

I think an awareness campaign is worth doing, but it’s only the beginning of a solution. Motorists don’t door riders on purpose. The problem is they’ve lived most of their lives in a culture where there’s little cycling. They have not learned to reflexively and instinctively look out for bikes before opening the door; even a motorist who cycles might have a momentary lapse.

What’s most needed now is decisive action by government to keep cyclists out of the door zone. That will necessarily involve some difficult trade-offs, as arterial roads can’t accommodate moving vehicles, parked vehicles, trams, cyclists and pedestrians with both efficiency and safety. Something will have to give.

Elimination of on-road parking in all or some sections of dangerous arterial roads seems the obvious candidate and, in some cases, it will be. It’s important though to understand to what extent the viability of traders — and hence the vibrancy of commercial strips — depends on the availability of on-road parking.

A lot of attention will no doubt focus on prospective physical solutions (e.g. segregated bicycle lanes). That will work on many roads but will be much harder to implement on roads with trams. It will also take time to implement.

I think this is an opportunity to start thinking about another option; give cyclists the legal and moral right to ride in the middle of a traffic lane rather than keep close to the left-hand side.

It wouldn’t be plausible on all roads. I have in mind local roads; dense locations like the CBD; and congested arterials where segregated lanes aren’t a realistic option, (e.g. narrow inner city roads).

It would give cyclists the confidence to keep out of the door zone and to avoid other potentially dangerous situations such as being shunted to the kerb on small roundabouts and traffic islands. It would signal to motorists that cyclists have the right to occupy the lane.

There would inevitably be some real or perceived delay to motorists, but that could be a price worth paying if it were to give a lot more travellers the confidence to take to the road on two wheels. I reckon it’s worth thinking about.

Yes, some cyclists might be bloody-minded and deliberately hold up faster traffic when they don’t need to, but I doubt that would be a widespread problem. These are the sorts of roads that are either already pretty slow or, in the case of local streets, offer the opportunity to overtake relatively soon.

Should bicycles be registered?

Going Dutch: look to the Netherlands to encourage cycling in Australia