Train in vain: the absurd history of training the Iraqi Army

From Iran to Israel to Korea to Romania, the list of countries that have trained Iraqis since 2003 is lengthy. And none achieved anything. 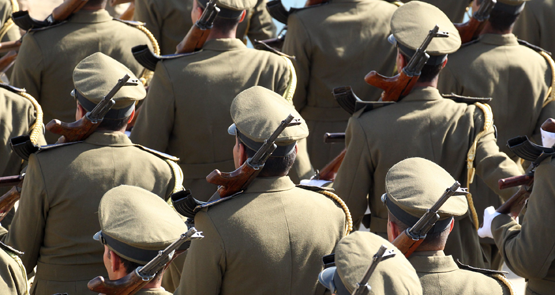 “Insanity: doing the same thing over and over again and expecting different results.” Anonymous, mistakenly attributed to Einstein.

With the government set to re-announce what New Zealand Prime Minister John Key has already announced — that Australian soldiers will be returning to Iraq to help “train” Iraqi soldiers — we’re continuing a long and proud tradition of foreigners who have helped train Iraqi military and security forces since 2003.

The United States company Vinnell was given a US$48 million contract in 2003 to train 9000 Iraqi troops to replace the dismantled Iraqi Army. More than half of the Iraqi troops subsequently deserted. Jordanian Army officers were then brought in to “finish” the training. There were reports the US had established a training camp in Jordan for both Iraqi troops and Palestinian Authority security personnel.

In 2005, the Iraqi and Iranian governments reached an agreement for Iran to help train Iraqi troops, at the same time as the US was blaming Iran for backing the insurgency. Meantime, the Americans declared their “train and operate” strategy with the Iraqis was working. The British were training Iraqi officers at a military college in Wales. The US Air Force boasted of using women to train 700 Iraqi officers. The officers were “now operational” — “out there every day doing the mission,” one of the female officers said.

In 2006, Israelis were found helping train Kurdish militia. The former British commander in charge of training Iraqi troops launched a blistering critique of US forces. An American replied that he was an “insufferable British snob”. As the US announced it was shifting more troops from combat to training Iraqi forces, an internal Pentagon report lamented how poor and ill-informed previous training efforts had been, including complaints about the use of inexperienced National Guard members. But US military publications were reporting how Iraqi soldiers were “eager to learn” from US special forces. By that stage, a long list of private firms was training Iraqi soldiers, police and private security guards to protect facilities. US soldiers were ordered not to report the growing incidence of abuse, torture and rape by US-trained Iraqi security forces.

Hundreds of US police officers, working under a contract with DynCorp, helped train Iraqi security forces in Anbar province in 2008. The Pentagon called for tenders for contractors to train the Iraqi military while embedded with Iraqi units. The contractors were to supplement the Americans’ new “partnership” approach to training Iraqi forces. South Korean special forces troops were helping train Iraqi military forces too.

In 2009, US marines were training “the next generation of Iraqi soldiers”. The Romanians were in Iraq helping out. Iraqi soldiers were being trained to train others as part of a “train the trainer” course. Prime Minister Nouri al-Maliki’s elite US-trained counter-terrorism force was by then running its own jails where the rape and torture of Sunni prisoners was commonplace.

By 2014, the cost of training the Iraqi Army, which was dropping its weapons and fleeing from Islamic State across Iraq, was estimated to have been between US$20 billion and US$26 billion for the Americans alone. That’s unrelated to cost of equipping the army with weapons and vehicles, much of which ended up in IS hands.

Still, we’re not the only ones. Nearly 10 years after the last training deal, in December, Iran signed another agreement with the Iraqis to train their troops. What chance we’ll all still be there in 2025?

Abbott, the nervy pugilist who may or may not have taken us to war

Australia’s role in Iraq must be examined

Practice makes perfect? Who knows, maybe they’ll actually do it this time?
On the bright side it will get Toady out of the country for while – when he finds himself in a future mess of his own making – for a photo-op?

Anybody who hasn’t trained Iraqi forces yet should immediately sign up with Lt. Earnest Goodbody of the 4th Musketeers!

Where is our national interest this? (apart from being a distraction from the imploding economy).

An interesting history which nonetheless avoids the obvious truth. We are not there to “train” the Iraqis any more than we were there to install truth, justice and American democracy. This is all about maintaining US hegemony (in league with the Israelis) over the Middle East and its all so important oil and gas resources. It always was and always will be. Hence the answer to your final questions is: almost certainly.

Apparently training soldiers caught in a proxy war between Saudi Arabia and Iran is a good thing for Australia. I’m not sure that I see how, but much greater minds than mine are obviously on the task, I just wonder when they are actually going to tell me how this makes our country better.