Budgie smugglers as far as the eye can see ... reporters pay for footage ... big gas paying to take attention from activists ...

Just keep swimming. While the Coalition’s budgie-smuggling triathlete leader has a lot on his plate at the moment, perhaps his presence on the party’s swimming team would have been enough to see off the press gallery’s swimmers, who emerged victorious from the Parliament House pool early this morning.

There’s something liberating about mixing with the nation’s political leaders and Canberra political commentators with only thin layer of Lycra separating you from them, noted The West Australian‘s Nick Butterly, who swam a strong leg in the 11x50m relay that forms part of the annual series of three-way sporting contests between the gallery and the two major parties. The media pack managed to defend the title from last year despite the last-minute scratching of its captain, Greg Jennett, who was put on an early flight at the last minute, leaving his ocean-swimming ABC colleague Jane Norman to arrange the order and collect the shiny trophy.

Both the Coalition and the journos lapped Labor in the relay, but Sydney MP Matt Thistlethwaite — a lifesaver from Maroubra beach — restored some working-class pride by storming home in the individual race, in front of The Mandarin‘s Stephen Easton, who along with Fairfax superfish Heath Aston swam two legs in the relay. Aston’s colleagues Sarah Whyte and Michael Gordon were no slouches either, but it’s clearly the national broadcaster whose swimming talent runs deepest, with Tom Iggulden, Chris Uhlmann and Andrew Greene all demonstrating a surprising turn of speed. For those of you who are brave enough, the ABC has footage of the competition, and Fairfax’s live blog has many photographs of both politicians and journos in Speedos. We decided this photo of the winning team could be published without a warning: 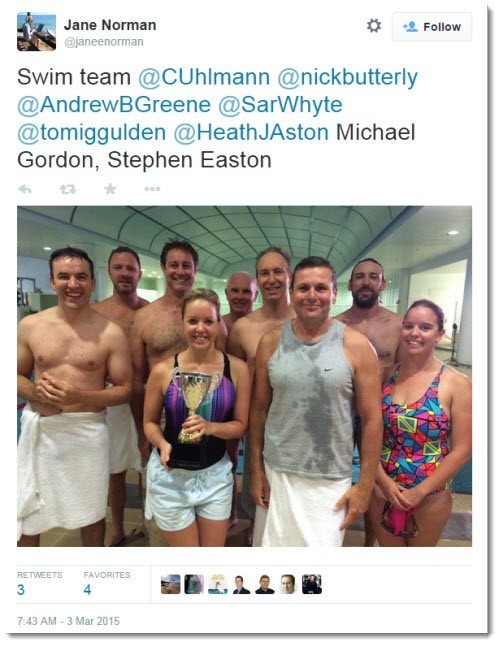 Chequebook journalism. The rise of smartphones has had mixed results for those of us trying to make a living off reporting the news, but when it comes to getting grainy mobile phone footage of various events, it’s usually meant news organisations have an easy source of pictures and audio. But at least one would-be “citizen journalist” wasn’t giving up the goods for free. We hear from a tipster that following a fire in an apartment block in Melbourne on Sunday night, which caused the backpackers’ hostel next door to be evacuated, a man was asked by an ABC journalist if the national broadcaster could use his video from his phone. He said he wouldn’t give it away for nothing, and after some haggling, was given some gift cards for the ABC Shop. But not long after this exchange the man was also asked for his footage by a Channel Nine journo, and after some haggling again, the Channel Nine journo agreed to pay for the man’s accommodation at the backpackers’ hostel for the rest of the week. That man sounds like he could be heading for a career in politics.

And baby makes three. The halls of Parliament seem to be going through a baby boom, with many MPs expecting, and we hear that the pitter-patter of small feet is also on the way for Greens MP Adam Bandt and his wife, Claudia Perkins, who are expecting their first baby in July. According to our tipster:

“Claudia was spotted in Canberra last week with the baby bump for all to see and is looking happy and healthy. The inner city Melbourne couple already have two lively dogs, the Deputy Leadership and a re-election campaign on the horizon so they are certainly going to be busy.”

We send our congratulations to Bandt and Perkins.

Too many verbs, Malcolm. Former Labor Minister Barry Jones had a small audience enthralled at last night’s opening Game Changers lecture at Victoria University in Footscray, speaking on the topic of “Evidence/Opinion/Interest. The attack on scientific method”. The speech covered public and media scepticism of science when it comes to issues like climate change and vaccinations. True to form, though, Jones was best when he moved off the script. He warned against the declining quality of policy debate in Australia and the reliance on three-word slogans, saying that the two major parties were “like two wings of the same bird”. He also offered his insight into why voters weren’t so keen on Malcolm Turnbull — “he uses too many verbs” in a political environment where complicated messages are out of vogue. Jones also said he was “very concerned” about the ABS’ plans to conduct a census once every 10 years, labelling the move “extraordinarily shortsighted”.

Outspending the competition. Frackman, a film by anti-coal seam gas activists, had its first screenings last week, and it is due to be shown in theatres and community halls throughout communities affected by fracking. It seems the film is making CSG companies somewhat uncomfortable. Frackman is the story of activist Dayne Pratzky as he tries to prove the dangers associated with CSG mining, but a tipster has pointed out to us that when you google the name of the film, the first result won’t direct you to a screening at all.

Mind your own business. The ABC announced a new “regional division” as part of the restructure that followed steep federal budget cuts, but since then we haven’t heard much about what the division will do, except that it will be headed by Fiona Reynolds. We now know the division will be launched on July 1, according to this survey, which is being conducted by Melissa Cadzow, a member of the ABC Advisory Board. The survey asks about people’s consumption of the ABC’s regional and rural content, what they access and why. It’s an interesting exercise and we wonder what results it will turn up, but we particularly like the options available when it comes to filling out demographic information. When it comes to age we are considering choosing “I’m n0t telling you that!” and marking our location as a “secret”.

It appears that you may have scared off the Energy Resource Information Centre, as their paid ad is not coming up for me on Google searches at this time.

An interesting article by the Queensland Country Life comes up at the bottom of page one on the three searches I did though:
http://www.queenslandcountrylife.com.au/news/agriculture/general/opinion/taxmans-role-in-frackman-film/2724817.aspx

For a newspaper catering to the needs of farmers who are affected by fracking I was surprised by the tone of the article, as were the people who responded to the article below.