Rundle: the Right roadkill on the way to a new republic

Guess what? The Australian people actually like the human rights commission and Gillian Triggs, and News Corp and the Right find themselves on the wrong side of history. 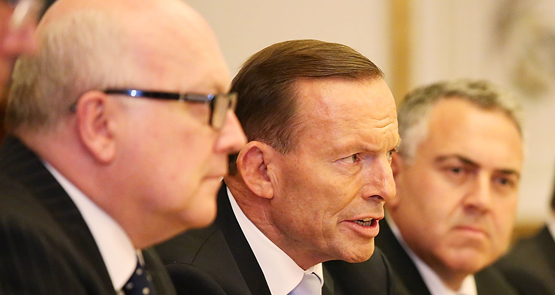 The Senate censure of Attorney-General George Brandis for his treatment of Australian Human Rights Commission head Gillian Triggs is apparently unprecedented — the Senate has never censured an attorney-general before. It’s another failure for Brandis, who has proved incompetent at everything he has set out to do in the office. He should have resigned by now. Thankfully, he hasn’t, so there’s another barnacle clinging to the side of Tony Abbott’s ship of state.

It’s worth pondering why the full-scale assault on Triggs proved not merely ineffectual but counter-productive for the government and the wider Right, when they put so much energy into it and were cutting with the grain of Australian political life in so many ways. Many Australians don’t want to be reminded of the treatment of children in detention, because it is unquestionably torture, inflicting permanent psychological damage.

Many want it done but they don’t want to own it — witness Jeff Kennett’s arrantly stupid comments, which shifted the blame onto parents. That was the smug, self-satisfied voice of many Australians of all classes speaking, clinging to the notion that they were a generous nation, not like those bastards over there — even though we are the only country that does this. So accusing Triggs of launching a politicised report should have been an easy out for anyone who wanted to ignore her findings.

Didn’t happen that way. People rallied to defend Triggs, concluding that the attack on her represented an attack on democracy, and made this attempt to pick off a critic of the government the main focus of a campaign. This push wasn’t met with much push-back. For all the concerted attacks from the conservatoriat, the comments strings on their blogs didn’t echo their howling denunciations — as they used to when someone like, say, Julia Gillard was mentioned.

There simply wasn’t a level of passionate hatred against Triggs, and so Abbott’s attempt to call on it and to embody it left him looking isolated and obsessive. The revelations of the behind-the-scenes scheming looked like bad government of the type that has now become associated with the Abbott era, a particular combination of sleaziness and incompetence, a sort of procedural santorum. The Triggs mess served to remind people just how hopeless and distracted the government was (and Ipsos notwithstanding, we may see that reflected in the next set of polls).

But the failure of the attack on Triggs was also due to a deeper structure within not only Australian politics, but also that of the West. That shift is a slow but perceptible slide in the ability of simple political mythologies to gain adherents, in comparison to a set of notions, based around equality and fairness, that are coming to be seen as common sense. There has not been a real viable left-wing political mythology in the West for decades, and so it is only the Right that is exposed by a gradual movement of political gravity to a mundane progressivism.

That Right political mythology began with the collapse of the Left’s socialist mythology of the ’70s and the vacuum created therein. Thatcherism, a fusion of conservative social authoritarianism and free-market liberalism, was its strongest form. The power of it was such that Thatcher could get away with a breathtakingly undemocratic act such as abolishing the Greater London Council because the city’s voters had returned a left-wing administration. The mythology carried all before her.

“This is simply a local version of a far more brutal and wide-ranging struggle that has consumed the American Right for several years.”

Following a hiatus in the ’90s, this mythos returned in the 2000s, post 9/11, with the Dubya and Howard regimes — and, in a parasite-host version, in Blair’s New Labour government. Its outward appearance was strident and triumphal, but this disguised its weakness and lack of substance, its inability to minimise the contradictions inherent within it. Failure, when it came, was on all fronts — a global economic collapse brought about by deregulation, failed wars projecting imperial power, and a series of last-ditch, old-style conservative campaigns on issues such as same-sex marriage became increasingly absurd.

The Abbott government is one of the very last iterations in this cycle. The Triggs mugging is a distant echo of something like Thatcher’s attack on the Greater London Council, the assumption that a sort of sovereign power can be wielded with impunity, and that there will be sufficient reactionary groundswell to support it. But it doesn’t work that way anymore — people increasingly understand society as an intersection of complex forces, with a strong bias towards a set of comprehensive rights of the individual.

You don’t have to be crazy on all aspects of that  — I’m not — to see that it is now the default idea for most Western societies, and it extends from everything such as gender, race and sexuality to material conditions, in questions such as essential healthcare and income support, to more amorphous ideas such as the right to follow one’s desires.

You can see this in the rise of campaigns around trans rights and anti-transphobia campaigns. On the one hand, some of this has an unquestionable “People’s Front of Judea” about it. On the other, it’s now simply impossible to suggest or believe that such issues are simply “add-ons”, because they concern the idea of citizenship as being that of the embodied person, not the characterless atom that is at the root of classical liberalism. The whole citizen, as an equal, has to be considered, and the public space in which they live has to be a space of that equality.

So call that, for want of a better word, a new republicanism — a global ideal not merely of qualitatively complex citizenship that has rights, but that exists in a space in which given power can be challenged and questioned by countervailing forces and institutions. The “new republic” joins together events and movements across the globe. Thus, Syriza in Greece has brought in short-order initiatives on three fronts: to challenge the myth of the financial markets and the European Union (however one feels about the strategy they have applied); to make immigrants’ Greek-born children Greek citizens, thus removing their stateless character; and to introduce same-sex civil partnerships. These initiatives were all strengthened — against great residual resistance in the case of the last two — because they were all different expressions of the same core idea about citizenship, rights and the public realm.

However distant or weak the echoes of such a wave of new republicanism are, they can be felt across the world. Obamacare is one, Occupy another, Podemos another. And in Australia, the multiple resistance to proposals for a Medicare co-pay and capricious punitive dole measures was another. So, too, now is the concerted resistance to moves against Triggs, and the weakness of any support for them. The public believes there should be bodies like the AHRC, and that they should be allowed to do their job.

The more the Right tries to push against this new universal conception of citizen and public, the more it will find itself bruised by the effort. Where the new republicanism draws its strength from a universality and a unity that might not be immediately apparent in individual struggles, the Right finds itself in greater disarray, confusion and conflict, the more it tries to go up against it. Witness the bitter battle that had broken out within News Corp between hardcore propagandists such as Andrew Bolt and those who know that it must have some commitment to news — such as John Lyons’ story on Abbott’s gung-ho Iraq re-invasion inquiries — if it is to remain any sort of organisation at all.

This is simply a local version of a far more brutal and wide-ranging struggle that has consumed the American Right for several years. It is observable in Sharri Markson’s expressed surprise when even the Sky News audience pushed back at her remarks on David Hicks: “torture away”.

And she didn’t understand that there was always a degree of concern across the political spectrum about the treatment of Hicks, and his abandonment by our government. Now that the US government has vacated his conviction, that solidarity can be more clearly expressed and owned, and it becomes an expression of that republican impulse. It’s Hicks who re-emerges as the citizen, and Markson who comes across as the twisted, vengeful nutter she is. No wonder she’s surprised. Just as Gorgeous George Brandis was surprised to find himself being the one censured, and the role of the AHRC emerging as strengthened. The Right will take years to understand this. Labor better be quicker about it, for its own sake. For the natural representative party of this new republican spirit is the Greens, and if Labor can’t own an expanded idea of citizenship before it becomes the central tenet of social and political life, they will be roadkill on the way to the new republic.

Let this be another “Gorgeous George A-G 101 Lessen” to all you aspiring A’s-G out there :-
[“This is what happens when you decide to play politics instead – and drop your balls.”]
While Abbott’s scowling reactions to bad PR has him looking like “Little Missed Sunshine”?

As for Kennett – the “honourable” figure-head of “Beyond Blew”? When are they going to wake up?

Cool, Guy, wondering how you reconcile the emergence of personal rights and decline of the lunar Right in the context of a Democtratic administration which authorises drone strikes, corporatises public schools, and signs warrants allowing for mass surveillance. In Straya, people rightly supported Triggs but also it seems support permanent war, knocking the unemployed, and storing metadata for the government to share with whoever it fancies.
Is there really a groundswell of people fed up with the Right always having to get its way, or is it an illusion because the Right and the Market are so entrenched that even a peep of protest is something big?
PS: enjoyed the concept of’procedural santorum!’

Maybe then it’s time to ramp up the campaign for a Bill of Rights – it will annoy the LNP clowns and will confuse Labor. It might give the Greens a chance to shine.

“For the natural representative party of this new republican spirit is the Greens.” Not just in this area. It is rather obvious that the Labor and Coalition parties in this country, to borrow George Galloway’s phrase about Labour the the Tories in Britain, “two cheeks of the same arse.” On all the fundamental issues the Greens are the only party that offers a real choice.

George Galloway’s quote (thanks Mr O’Neill) is worth bottling.

Australia desperately needs a greens-like party that is electable, and please find a leader that somebody can support, I don’t know, somebody with the gravitas beyond a primary school teacher.

I’ve long since given up on the coalition, unless Malcolm can take the leadership and eject at least half the party, and the Nationals, and Labor just offers an idea of a scintilla of a harbinger of a memory of hope.