Russian opposition figure Boris Nemtsov was murdered and left lying in the streets of Moscow. Was he murdered by the state? By Ukrainian nationals looking for a martyr? By a jealous lover? Freelance journalist Sasha Petrova reports. 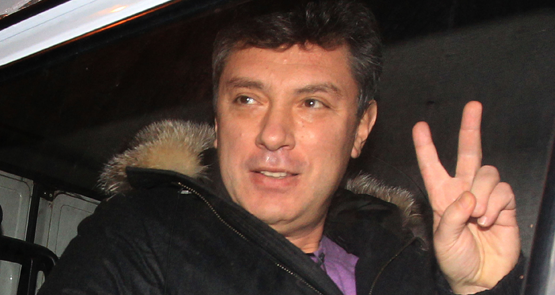 Three hours before he was murdered, Boris Nemtsov had strutted confidently into the studio of one of Moscow’s liberal radio stations. He was wearing jeans and a light blue, long-sleeve top that hung loosely over his broad shoulders.

During the interview that followed, Nemtsov displayed his customary air of charisma. He was handsome, charming, vivacious.

A few hours later, his dead body lay for all to see in one of the main streets of Russia’s capital, the imposing shape of the Kremlin glimmering as a surreal backdrop to the scene. It seemed unreal, as if staged.

Few could believe it. This was Boris Nemtsov, a former deputy prime minister and governor of Nizhny Novgorod Oblast, a district with a population of over 3 million. A prominent figure in Russian politics, dead. And only two hours after an interview in which he called on people to come to a march against President Vladimir Putin, against the war in Ukraine and the country’s economic collapse. It was only a few weeks after he gave another interview in which he said he was afraid Putin might have him killed. It was almost too ridiculous to be true.

Nemtsov was shot four times in the back, as Russian opposition figure and former chess grandmaster Garry Kasparov put it, “once for each child he leaves behind”.

Less shocking than the murder itself were the absurd theories that followed not long after Putin vowed to assume “personal control” of the investigation. This statement, directed mainly at Nemtsov’s mother as a form of consolation, would likely have the opposite effect. She had repeatedly warned her son to tone down his anti-Putin rhetoric for fear of his life. She would know that, judging by the investigations of the murders of journalist Anna Politkovskaya and businessman Boris Berezovsky, “personal control” meant the President would personally ensure that the investigation went nowhere.

While most Western media has omitted this fact, Russian counterparts are at pains to point out that, at the time of his death, Nemtsov was in the company of a 23-year-old Ukrainian model — an example of his promiscuity and a not-so-subtle hint of a Ukrainian connection to the murder. As is customary in Russia, the propaganda has begun. A state-owned Russian paper has published some of the whodunit theories of the country’s top investigators:

A program on Russian state television that ran on Saturday night pursued the line of inquiry as related to Nemtsov’s Ukranian companion. There were two guests.

The first: Vladimir Zhirinovsky, the leader of the Liberal Democratic Party of Russia, a right-wing extremist who would give Liberal Senator Cory Bernardi a run for his money.

The second: a deputy speaker in the Duma (the Russian parliament), Sergei Zhelezniak.

Zhirinovsky began answering the question of who he believed was behind the murder by yelling at an invisible adversary that the opposition figure had brought his death upon himself. He was constantly opposing everything, Zhirinovsky spat as he poked his finger at the air. What was he doing with a beautiful Ukrainian model in the middle of the night? Nemtsov was more than 30 years older than his companion, Zhirinovsky yelled jumping from one disjointed thought to another. Everything was going well in this country and he had to go and ruin it.

Then Zhelezniak chimed in with the martyr theory. In a calmer manner, he echoed Putin’s comments that the murder had a “uniquely provocational character”. Support for the opposition had been waning in Russia, he said, and they had to resort to desperate measures to destabilise the government. A martyr would garner support and more might come to the rally on March 1.

Another member of the Duma then rose from his seat and completed the usual circle of culprits. This stinks of the United States, he said, to hearty applause.

This is the kind of propaganda that Nemtsov spoke out against in his last interview. Advertising the anti-crisis and anti-war march that was to be held on March 1, Nemtsov listed the organisers’ demands. They included immediate cessation of the war in the Ukraine, an investigation into corruption in the top levels of government and the inclusion of the opposition on state television. Evidently, no opposition members were invited to the above program.

Nemtsov, who is often portrayed as the enemy of the state on Russian television, argued for the basic tenets of democracy. Only the truth could fix Russia, he said, and the truth could only be heard if state television allowed a variety of opinion.

“Everything in this country is built on lies,” Nemtsov told Moscow-based radio station Echo of Moscow on the night of his murder, proposing that a debate needed to be had on state television between himself and Putin, where he would ask him the following questions:

The opposition had been quashed, said one of the presenters, after lamenting that such debates were non-existent on Russian television.

“The people are being lied to. I’m only a man, right? When they begin to call you the ‘fifth column’ or a traitor, it is very difficult to keep it together, but, nevertheless, we must endure. Look, the truth is stronger than all their intelligence services, all of them.”

Not long after these words, Nemtsov was dead. Perhaps his killers also knew the power of the truth.

In Russian-speaking Odessa, a call for calm as Putin advances

The new tri-polar world: why Russia can do whatever it likes

How the West can broker a deal with Russia on Ukraine

Sasha, the question the Police always ask first: cui bono? I cannot think of a single good reason to suggest that Mr Putin benefits from Nemtsov’s death. After all, at the last election Nemtsov’s party polled about 4% thereby failing to qualify for a seat in the Duma. Putin on the other hand enjoys around 85% approval rating in multiple public opinion polls in Russia.

On the other hand however, there are a number of groups that could be nominated as seeing an advantage in having yet another incident pinned at the Kremlin door, literally and metaphorically. I suggest that the wisest course of action by western commentators is to let the investigation run its course. Speculation only feeds the frenzy of anti-Russian hysteria.

When it comes to reporting western politics, the western media take the attitude that there are no conspiracies, only c**k-ups. But when it comes to reporting Russia, then everything is a conspiracy. The most glaring omission from this report is the statement by Mikhail Gorbachev, usually darling of the west and no friend of Putin, agreeing with the Kremlin, that this murder is probably an intentional destabilisation of Russia. Gorbachev has also backed Putin over the Ukraine stand-off, agreeing that it is has been caused by the aggressive, east-ward expansion of NATO.

Why are the theories being ventilated on Russian TV a priori “absurd”?

Only days ago a US senator was caught out circulating images purportedly of Russian troops in Ukraine. But the images actually came from prior conflicts. The photos were shamelessly passed off by a Ukrainian delegation as real. This tells you two things:

a) The Western establishment will fall for any anti-Putin claptrap.

b) The Ukrainian authorities know this so there is no “moral hazard” in them pushing the limits with ever more brazen stunts. Killing Nemtsov is nothing to them, after all they’ve been shelling civilians in eastern Ukraine for months and Ukraine, Australia and Holland are doing their best to keep the investigation into MH17 as quiet as possible.

As a false flag, this was an over-reach. Very few in the Russian opposition are even blaming the Kremlin. It is just way too convenient that this happened just before a rally.

But it is very effective propaganda outside Russia.

“As a false flag, this was an over-reach. Very few in the Russian opposition are even blaming the Kremlin. It is just way too convenient that this happened just before a rally.
But it is very effective propaganda outside Russia.”

Dead right, Limited News. This one is even a bit too obvious.

Alive Nemtsov wasn’t even a flea on the Putin elephant, martyred he can be a symbol used for all sorts of black propaganda.
Alive with a lubricuous model on his arm and who knows what other tacky stuff well known to the security services, he may have reached his use-by date.