Liberals go missing in NSW ... Disability activist not welcome at conference ... curious George's inbox about to fill up ...

Don’t say the L word. It’s election month in New South Wales, and our trusty tipsters have passed on the fliers that are filling up their letterboxes. One tipster in the seat of Wollondilly, currently held by Mental Health Minister Jai Rowell, has received no fewer than three pieces of bright blue paraphernalia, and while they include many graphs and smiling pictures, there is one word that is noticeably absent. Yes, you guessed it — as in Victoria and Queensland, the NSW Liberals are not exactly broadcasting their identity. One of the fliers advertises the “Baird Liberal government” (no Abbotts here), but others just mention the “Baird government” — and Rowell is the “member for Wollondilly” not “Liberal for Wollondilly”. We’re always interested in the election material that bombards voters in the lead up to an election, you can send us yours here.

APH crews not happy. We hear that TV crews and photographers at Parliament House are unhappy about new rules relating to where they can film doorstops as ministers enter Parliament House. Last week crews were informed that pedestrian bollards (that’s glorifying the actual, rather flimsy poles put in place) would henceforth be deployed to keep a safe distance between cars and pedestrians at the steps leading up to the ministerial entrance to Parliament House. They are, however, decidedly inconvenient for film crews and photographers. Access to the ministerial wing from within Parliament House is already now restricted — journalists and photographers have to show their passes to security guards and explain what their business is when they’re heading down to see ministers. Now this. Many restrictions on the press are being advanced in the name of security in Parliament House, but politicians have never liked the media having unfettered access. The ministerial steps are right next to where a furious Paul Keating in the early 1990s ordered his car to stop, wound down the window and demanded to know where the film crew hovering outside the ministerial car park were from. PJK preferred bollockings to bollards.

No disabilities here. The sixth annual National Disability Summit will take place this month, but we hear that it’s not all that easy to attend if you want to claim the concession rate. Disability activist Jax-Jackie Brown had bought a ticket to the event in Melbourne at the concession rate, only to be told that the conference had already sold its limited number of concession tickets and that she would need to pay the full amount to attend. Her exchange with the conference organisers is detailed in this Facebook post, in which she says she contacted Informa, the company organising the conference, and was told by conference organiser Tina Karas that the computer system had been mistakenly offering the concesssion rate until Friday, even though the 12 concession places had already been claimed. Brown’s post claims she had been left out because she identified herself as a disability activist, but Karas says that the conferences doesn’t prohibit activists, saying that there would be presenters at the conference who identify as “disability advocates”. Karas added that six out of the 25 presenters identified as having a disability, “including a panel of consumers”. Karas emphasised to Crikey that the conference’s primary audience was policy and service providers, but that over the five years an effort had been made to include people with disabilities. In the past few years there has been a “nothing about us without us” movement in the disability community — it looks like the National Disability Summit is the the most recent avenue.

Curiouser and curiouser. With the government set to pass data retention laws with Labor’s support, activist group Beyond Green has launched the “Curious George” campaign in protest. The campaign encourages people to CC George Brandis in on all communication — “Email, Facebook, Twitter. Calls, Texts, Skype. Friends, Family, Politics. The lot!” — to save him the trouble of retaining data. Spokesperson Ben Pennings said, “we know George Brandis is very curious. But 400 million dollars is a lot of money to spend on monitoring our everyday internet and phone use. Taxpayers can save a heap of money by just cc’ing all their email to ‘Curious George’. All he has to monitor then is social media, internet browsing, texts and phone calls. I reckon I might get a knighthood for this!” 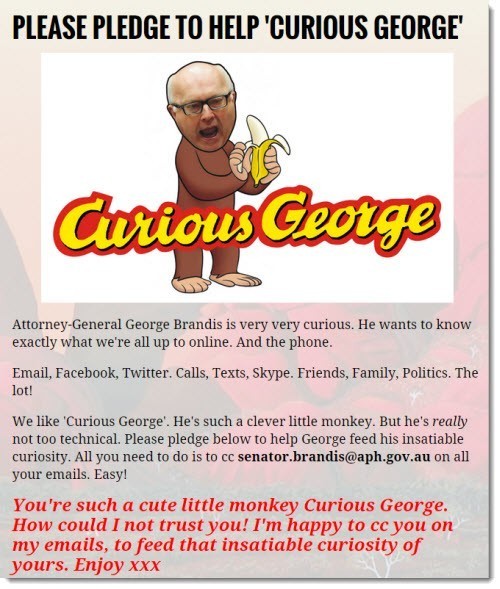 Skyrocketing morale? We hear that all is not well at Melbourne’s La Trobe university:

“PWC has been paid millions by Latrobe university for consulting services — this terminated in a ‘demeaning” video of rockets and spaceships trying to inspire staff to reach greater heights with their research efforts. Some world-class researchers present found this patronising, naive and demeaning.”

We haven’t managed to find a copy of said video, but if anyone wants to send it our way, we are always interested in a bit of inspiration.

“Morale appears to have dropped in the NBN project team. The mish mash of technologies forced onto NBN by Comms Minister appear to be causing major technical problems, particularly in central hubs where the has to be seamless interconnection. It may be that senior engineers do not yet know how to do that interconnection.”

We asked the NBN Co about the delays and morale, but didn’t hear back by deadline.

*Heard anything that might interest Crikey? Send your tips to boss[email protected] or use our guaranteed anonymous form

“NSW Liberal …. With Everything but Honesty”?