Luke Foley has his work cut out for him to defeat the country's most popular political leader, Mike Baird. And so far Labor's election promises have been rather modest. 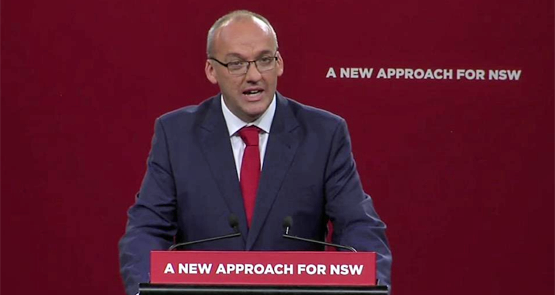 New South Wales Opposition Leader Luke Foley has started his first election campaign with the bold prediction that NSW Labor can repeat the recent victories in Queensland and Victoria.

Foley wants to emulate Annastacia Palaszczuk and Daniel Andrews by defeating the NSW Coalition government after just one term in office.

He recalled a 19th-century cricket anecdote, when Australian fast bowler Fred Spofforth inspired teammates before a final test innings saying, “This thing can be done”, and duly led the side to victory.

“In NSW, at this election, this thing can be done,” Foley told supporters at the official launch in Campbelltown on Sunday. “Anyone who has lived through the last 10 years of Australian politics and says an election is unwinnable is a fool.”

At his very first press conference as Opposition Leader on January 5, Foley showed the same buoyant enthusiasm: “I can do a lot. Watch this space. I am in this to win it.

Bob Hawke, John Faulkner, Rodney Cavalier and few other cricketing types probably enjoyed the Spofforth trivia, but it went over Bob Carr’s head, and would be lost on any audience in Auburn, the western Sydney seat Foley has chosen as his ticket from the Legislative Council to the Legislative Assembly.

A total of 80.4% of the Auburn electorate were born overseas and have never played or heard of cricket, let alone the “demon” Spofforth, who lived out his non-playing life in England as a wealthy tea trader.

Foley was introduced to Sunday’s Campbelltown audience by former Newcastle TV presenter Jodi McKay, NSW opposition planning spokeswoman. Unusually, she is a member of the shadow cabinet but doesn’t yet hold a seat in Parliament. She has been parachuted into the Liberal-held seat of Strathfield after Foley declared she was a cleanskin who could be trusted in the planning job. So what of his other parliamentary colleagues? It didn’t say much for them.

One stand-out item was the allocation of $1.3 billion for schools and TAFE. On closer inspection, the promised amount was strung over 10 years, or just $130 million a year. Education Minister Adrian Piccoli has introduced such a swathe of sensible and long-overdue reforms that Foley would do well not to rattle the education cage, if it simply highlights Labor’s wasted years.

Foley’s speech was sprinkled with remorse and regret for the party’s record over the past 10 years. That conveniently took him back to the cut-off date of 2005, Bob Carr’s last year in office. In so doing, he deftly trashed the premierships of Iemma, Nathan Rees and Keneally and the opposition leadership of John Robertson.

Liberal attack dog Anthony Roberts, the Resources and Energy Minister, was — predictably — unimpressed, telling Crikey: “Foley’s ALP is still only talking about themselves. For an opposition leader to travel to Sydney’s west and offer no vision of the city and the state’s transport is remarkable.”

Inner-city Labor members were disappointed Foley did not announce a change of heart on gay marriage. If he intends breaking his adherence to Vatican doctrine on same-sex marriage — and boost Labor’s chances of winning Newtown, Summer Hill and Green-held Balmain — he will probably give an “exclusive” to The Daily Telegraph further along the campaign trail.

Meanwhile, his supporters are anxiously measuring its impact on Auburn voters from Middle Eastern and African countries — places where gay sex, let alone gay marriage, is banned and violently repressed.

It has become so acceptable that even conservative-minded states of the United States have passed laws allowing gay marriage.

It’s one of the very few issues on which Foley shares a unity ticket with Tony Abbott.

The privatisation plan of the LNP should be what Labor focuses on.
I don’t live in NSW, but the voters would have to be mad to endorse that particular bit of bastardry. You will all end up paying double for your energy bills. Learn from SA and Vic, while you still can!!
Sure it means taking a chance, but don’t forget there were just as many LIBERAL politicians who came out of ICAC looking decidedly shabby. Everyone seems to forget about that – particularly the media.
Yes, that means you, Alex, and the rest of your ilk at Crikey!!