Fairfax puts a Labor pollie on the wrong side of history. And other media tidbits of the day.

Rating 7.30? It depends how you slice it. Last year, Crikey crunched the ratings figures for a week of 7.30 programs, concluding that the program rated strongly in states that suffered from a lack of media diversity. But the ABC has argued that if you look at the ratings of the now-axed Friday editions of 7.30 more broadly, they underrated the national program over the whole year.

The issue got another burst of life in Senate estimates last week, when Senator Nick Xenophon cited figures that he said showed the state-based Friday editions outrated the national edition in Adelaide, Hobart and Perth. The claims, which relied on ratings between September 29 and October 31, were repeated in The Australian this morning, leading to a swift denial from the ABC. The broadcaster said in a statement this morning

“The national average figures for 2014, across a more scientific 46-week period, confirm the position presented by the ABC at Senate Estimates. Oztam audience share figures for 5 City Metro in 2014, the key indicator, register an average audience for the Monday to Thursday edition of 730 of 702,000 compared with 521,000 for the Friday night state based editions. This is a significant difference.”

Over a 46-week period, the average audience for the Monday-to-Thursday national editions of 7.30 averaged 70,000 viewers in Adelaide, Aunty claimed. The Friday version averaged just 55,000 viewers.

Since axing the regular Friday night state editions of 7.30, the ABC has instead focused on occasional one-hour specials on state news from time to time. The ABC said these had been well-received by its audiences. In Adelaide, a one-hour extended news bulletin that included a special report on Adelaide’s health system secured a local audience of 83,000, a 19.2% share of TV audiences for that night in Adelaide. — Myriam Robin

Financial “get with the” Times. The Financial Times has ditched the metered charging model it pioneered for online access to its paywall and adopted a clone of the access models used by The New York Times and The Wall Street Journal. Before the change, readers could access up to three articles a month for free — up to 10 if they registered — but had to become subscribers to gain greater access each month. As of Friday, the Times is offering non-paying subscribers a month’s free trial, providing access to most FT content for a “nominal” sum (about US$1). The FT says it is still working on the details of the new system, but initially those already registered will still be able to access three articles a month. The FT claims using paid trials rather than a meter increases subscription rates by between 11% and 29%. Pearson Group, the FT’s owners, said the paper had grown its total print and digital circulation by 10% to nearly 720,000, with digital subscriptions up 21% year-on-year to almost 504,000 in 2014. Digital now accounts for 70% of the FT’s total paying audience. The company said the digital circulation growth had offset “continued structural declines in print content and advertising”. The FT’s print sales worldwide fell 8.9% in 2014 to an average of 215,429 — including what UK media called “bulks”: newspapers given to airlines, hotels and the like. — Glenn Dyer

Weisbrot settles in. New Press Council chairman David Weisbrot has started his three-year term. Taking over from Julian Disney, who announced his retirement last year after five years in the role, Weisbrot is a former president of the Australian Law Reform Commission who, during his time there, led an inquiry into Australia’s privacy laws that put him at odds with Australia’s major media proprietors. He takes over a Press Council that’s strong as it’s ever been — after the Finkelstein Review, Disney convinced publishers to increase their funding for the council — but also faces challenges to its relevance.

The Guardian Australia, the fifth most-visited news website in the country most months, last week announced its intention to not join the Australian Press Council, opting instead for self-regulation. And News Corp Australia’s relationship with the council is tense, after a number of its editors raised their objections over what they see as the council’s activist rulings. Two weeks ago, Australian editor-in-chief Chris Mitchell called on Australian publishers to form a new council, headed by media proprietors. — Myriam Robin

Brooks back at News Corp. According to London reports, Rupert Murdoch is about to get his favourite red-top back. The Guardian reported overnight that Rebekah Brooks is headed for a gig in the US offices of News Corp, claiming she will be heading up Murdoch’s search for new online investments.

Just what Brooks will bring to News Corp is hard to see. Its best asset is Australia-based, online, real estate listing company REA Group, and its biggest diversification since the split from 21st Century Fox in June 2013 was the purchase of  US online real estate listing Move in a near-US$1 billion deal. News bought Harlequin, the Mills and Boon bodice-ripper publisher, for more than US$400 million a year ago for its online publishing and e-books as much as for the print books. And News also picked up Storyful for around $25 million, a company that monitors the internet in real time looking for stories. In December, News announced it had acquired Indian education start-up BigDecisions after taking a large share in real estate company PropTiger.

Given these acquisitions, what can Brooks bring to News Corp and its future that existing management hasn’t? The online purchases so far from News are substantial and will need integrating into the company’s operations. She has no operational experience integrating online and dead-tree businesses, and her digital awareness is minimal to say the least. Brooks’ New York arrival sounds like a new headache for News CEO Robert Thomson — and his probable successor, Will Lewis, CEO of The Wall Street Journal and an online maven. This sounds like another typical Murdochian set-up of pitting executives against executives to see who wins. — Glenn Dyer

Finding its Voice. UK commercial TV network ITV should have two things to report this week — its full-year profits, and a big purchase that will secure its position as the largest independent TV producer around the world. ITV confirmed on Friday that it is in exclusive talks to buy Talpa, the production company behind hit talent television series The Voice, which is being produced here for Nine by Shine. Shine, formerly wholly owned by 21st Century Fox, has now been grouped with Endemol and Core Media (a small US group) in an independent group half-owned by Fox and Apollo. While ITV cautioned on Friday that discussions with Talpa might not lead to a purchase, TV industry sources say the talks are well advanced, with the aim of concluding them for announcement with ITV’s 2014 results on Wednesday night, our time. ITV shares are doing well, hitting a year high on Friday.

In Australia, ITV’s production arm’s biggest gig is producing I’m A Celebrity … Get Me Out Of Here! for the struggling Ten Network. The series has just over two more weeks to go on Ten and is due to end on March 15. Ten is likely to renew it for next year because it has boosted audience figures so far in 2015 — and to stop it being picked up by a desperate Nine Network, which needs another high-profile reality program to replace Australia’s Got Talent. This absence of a major second-string reality program for late in the year is why some in TV believe Nine will pick up Big Brother for another season, especially as the first season of The Block for this year has done poorly and high-profile mini-series Gallipoli has flopped. The Voice is now in production for Nine to air after Easter in April. If ITV buys Talpa, the local arm will get control of The Voice in 2016. — Glenn Dyer

Whose side are you on? Subbing follies again: a month ago, NT Labor Party president Matthew Gardiner departed Australia to fight alongside the Kurdish Peshmerga against the brutal Islamic State. Genuine bravery, but Fairfax appears, on the front page of its website, to have put him on the other side:

Aston’s article makes clear that Gardiner is fighting against IS, but the sub was relying on the mildly archaic expression “join the fight” — which does not, however, contract accurately. The front page was even worse, simply noting “Labor senate hopeful who joined IS contacts home”, which might be good for a quick libel settlement to buy some refugee supplies.

Front page of the day. Who says you can’t get boobs and cannibalism on the same page. 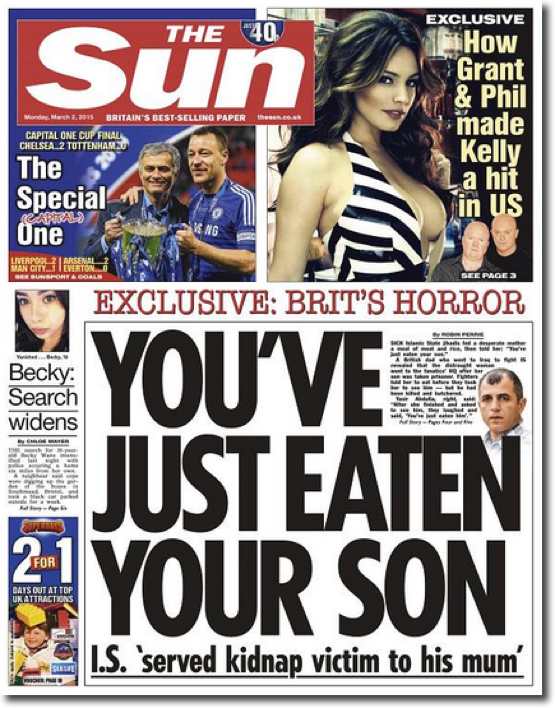 Surely we know by now that Brooks is one of Rupert’s “Pet Projects”?
A more pertinent question would be how much is he prepared to pay such an air-head who “gnu nuthink” about what was going on around her at NotW?

I second klewso’s point about an executive who had no clue (apparently?) about how her reporters were sourcing their material for sensational page one headlines.

You’d probably have to get down on your hands and knees to find the answer to that?

“Slicing” 7.30? I don’t think so. What the ol’ flagship needs, if Rupert’s thumbs-up to the mob mentality is anything to go by, is cleavage – and lots of it.