Evans squirms at international conference ... Hep A close to home for journos and pollies ... Mike Baird learns a lesson

Why can’t we be friends? Former foreign minister Gareth Evans would have been shifting in his seat at the opening of the Responsibility to Protect conference in Phnom Penh yesterday, according to The Phnom Penh Post. Cambodian Prime Minister Hun Sen addressed Evans directly in the speech over comments Evans had made about him last year. According to the Post:

“Turning and directly facing Evans in front of numerous diplomats, dignitaries and scholars, including Australian Ambassador Alison Burrows, Hun Sen asked why his former ally no longer wanted to be friends.

‘I just wonder…why, my friend, did you criticise me last year as reported in the newspapers?’ he asked to Evans’ obvious discomfort, before complaining about the international community’s reluctance to explicitly refer to preventing the return of the Khmer Rouge in the Paris Peace Agreements.

‘I remember the memories of working together’ Hun Sen continued, recalling driving around with Evans in Sydney and late night negotiations in Jakarta in the lead-up to the 1991 accords.

‘We have been friendly together. But [now] you don’t want to be friends anymore?’ he asked.

‘I don’t deserve Gareth Evans’ criticism because I’m thinking about the memories of working together for so long.’

The premier then tried to lighten the mood by adding he was ‘just joking’ but curtly added that ‘for some of it …I  ’m not joking, it’s real.'”

The report says the two shook hands at the end of the speech — but have they really made up?

Pop quiz peril. You would think by now that politicians would learn to be wary of the pop quiz by a radio or television host, but not Steve Ciobo, the new parliamentary secretary to the Minister for Foreign Affairs (who found himself in the job after Brett Mason got shafted in the December reshuffle). Ciobo was a guest on the ABC’s Pacific Beat on Tuesday  and when he was asked by host Bruce Hill to pronounce the name of a Micronesian country in the northern Pacific beginning with “Kiri” he named Kiribati, but he pronounced it phonetically instead of “kiribus”, which is the correct pronunciation. When Hill called Ciobo on the error, the new parliamentary secretary went on to defend himself, saying that he could still do a good job without knowing the particulars of pronunciation. The pop quiz is one of the oldest tricks in the book — but it obviously still works.

Hep A in the press gallery. While Ms Tips has purged her freezer of frozen berries (not Nanna’s brand, but better safe than sorry), the Hepatitis A scare has hit close to home for the Canberra press gallery. Fairfax video producer Callum Denness was admitted to hospital yesterday after being diagnosed with the disease. He says he bought two kilos of the berries because they were on special, and has since become the ACT’s first recorded case of the disease since the outbreak. Denness’ diagnosis was reported by Triple J’s press gallery reporter Alice Workman. The best moment of the top-notch report is when Denness calls his mum to inform her that he’s on his way to hospital with Hep A and she asks him if he has clean undies. Proving parent priorities are the best priorities.

Jobs agency closes today. Today is the final day of operation for CRS Australia (formerly the Commonwealth Rehabilitation Service), which was devoted to helping people with injuries, disabilities or health conditions find work. The services of CRS Australia have been outsourced to private job search agencies — including to the agencies named in Monday’s Four Corners report on the big business of unemployment in Australia. One tipster worries that people with disabilities will find themselves stuck in the same system:

“… which is rapidly turning into just another stream of JSA [Job Services Australia] with incentives to providers to churn jobseekers through rather than providing meaningful support to meet their vocational goals, and minimal sanctions for those caught with their hand in the till.”

Letting the cat out of the bag. While we are generally happy to find any excuse to publish a picture of a cute cat, we are also sad to hear that Kate McClymont’s feline friend Alf has gone missing. While we hope he arrives in her inbox soon, we did get a chuckle from the first reply to her tweet about his disappearance. 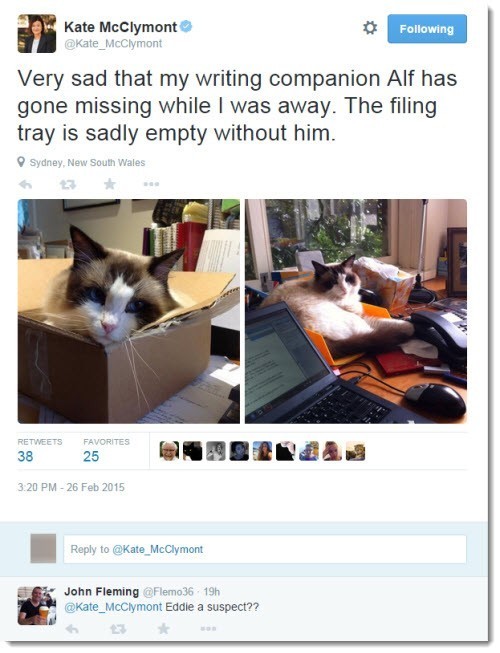 Abbott’s no selling point. While the Federal Liberal party is working out how to shaft Tony Abbott from the top job, it seems that many of the party faithful have already decided to distance themselves from Abbott. At the University of Melbourne’s O Week festivities yesterday the Liberal Club’s stall was devoid of any images of Abbott, instead enticing in naive first years with pictures of John Howard and Robert Clark, the state member for Box Hill. The same has happened at Monash Uni, but they’re claiming they aren’t making a statement on Abbott’s future with the lack of posters. If you think people are more likely to join your club if it isn’t associated with Abbott, maybe that’s a sign of how voters feel as well.

Shake it (copyright) off. NSW Premier Mike Baird tried to jump on the “reading mean tweets” bandwagon yesterday by uploading a video of himself reading some fairly unamusing tweets and Facebook posts. Baird’s office made the mistake of using copyright music though, causing the video to be taken down within hours of its publication. The whole incident made the Crikey bunker glad that we had the idea to copy Jimmy Kimmel first, and that we used music covered by creative commons. Ms Tips is searching through the Tips and Rumours archives for round two of Celebrities Read Mean Tips — if you have a favourite tip you want a celebrity to read, let us know. 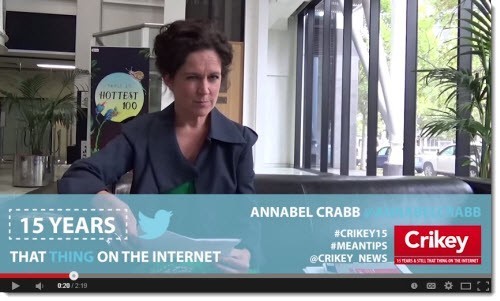 Our new refugee ‘dumping ground’: what Cambodia thinks of the request

A Green future is the only way

So the job agency fraud scandal finely gets a couple of paragraphs in Crikey?
Where is the major article (as a follow-up to 4 Corners), and some further research to tell us how taxpayers and the unemployed are being ripped off by these low-life organisations. And what are your suggestions about how to fix the rorts????
It seems to me we would be better off with the former Commonwealth Employment Service. At least they found people jobs, as I remember.
Not good enough, Crikey!

While Australia, Gareth Evans and General Sanderson did their best for Cambodia they created a monster in Hun Sen. He probably lost the last election and will certainly lose the next one but he and his cronies will not go.He has made billions with a finger in every pie and losing power is just not acceptable. There are so many cronies that only a revolution with many executions of top dogs and their whole families will repair things.
But Cambodia tried this before and it didn’t work out well, the Khmers are their own worst enemies.
Poor fella my country.