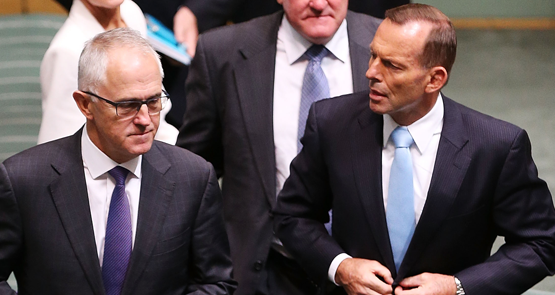 Amid another week of damaging leaks, desperate rhetorical overreach and the related odours of a prime ministership in terminal decline, a curious thing happened on Tuesday.

Not one, not two, but three opinion polls were published showing a solid uptick in support for the Coalition.

The bounce that was progressively recorded by Newspoll, Essential Research and Roy Morgan was, it must be noted, very much of the dead-cat variety. According to the BludgerTrack poll aggregate maintained on my blog The Poll Bludger, Labor continues to hold a lead of 54-46 on two-party preferred — something it last managed at a national election when John Curtin was in the Lodge and the Imperial Japanese Army was in New Guinea.

Even so, this marks a substantial improvement on the Coalition’s form since the aftermath of Australia Day, suggesting the dynamics of the February 9 spill motion are playing out in unexpected ways.

While Tony Abbott would obviously rather his government be up than down, a judicious reading of Newspoll especially suggests he shouldn’t take too much comfort from the results.

Instead, the move back to the Coalition can best be seen to illustrate the complex range of factors in play when poll respondents are invited to answer entirely hypothetical questions about voting intention based on the prevailing circumstances of the time.

An instructive point of comparison is provided by Kevin Rudd’s first challenge to Julia Gillard in February 2012, which was announced on a Thursday, pending resolution at a party room meeting the following Monday.

In the intervening period, Newspoll took to the field to conduct a poll, which, it seemed safe to anticipate, would confirm the axiom that “disunity is death”.

But when the results were published in The Australian on the eve of the vote, what emerged was a two-point shift in favour of Labor, whose two-party deficit was recorded at an almost competitive 53-47.

The damage would, in fact, hit home after Gillard prevailed in the party room by a 71-31 margin, following a scorched-earth assault on Rudd and his prime ministerial record by senior Labor figures including former treasurer Wayne Swan, party stalwart Simon Crean, and Senator Stephen Conroy.

Swinging voters were evidently not sold, as Labor immediately went into a renewed death spiral in the polls — and also at the ballot box in Queensland, where former premier Anna Bligh’s government was reduced to seven seats at the state election of March 24.

This appeared to support the theory that Labor’s relatively strong result on the eve of the leadership vote reflected an optimistic conviction among Rudd supporters that the wrong of June 2010 was about to be righted.

With no active challenger in the equation against Abbott, it may be that a similar scenario is now playing out in reverse, with the spill motion signalling to potential Liberal voters that they can factor Abbott’s looming demise into their calculations.

Certainly it is clear from Newspoll’s numbers that there has been no softening in attitudes towards Abbott personally.

Newspoll was the biggest mover of the three pollsters this week on voting intention, recording a three-point lift in the Coalition primary vote to 38%, and a four-point lift on two-party preferred to 47%. Absent a clear alternative explanation, changes on that scale are commonly attributed to a rogue result from one poll or the other.

However, the samples that produced these highly disparate figure were of one mind so far as the performance of the Prime Minister was concerned, with his approval rating at 24% in the former poll and 25% in the latter. On both occasions, his disapproval rating was 68% — exactly equal to the worst result ever recorded by Julia Gillard.

Contrary to the wishful thinking of certain Abbott supporters, there is no reason to think that voters have budged from the view that the Prime Minister is, to quote a colourful account of Liberal focus-group research provided to Laura Tingle of The Australian Financial Review, “an idiot, hopeless and an embarrassment”.

However, it is no less clear that if the Liberals prove better able than Labor to finesse the transition to a more palatable alternative, it will immediately become a very different ball game.

Thanx for a most informative analysis, which I find very persuasive. I agree that Labor supporters shouldn’t enjoy Abbott’s current problems too much, or perhaps they should enjoy the Coalition’s difficulties while they can.

Oh for an oasis, overflowing with hope, in these shifting sands of political insanity. Please, give us some politicians worthy of this country.

Regardless of all the recent political shenanigans, as covered in this good article of yours, William, our political condition in Oz has deteriorated rapidly in recent times.

I feel Tony Windsor was the last pollie of any value. His common-sense and integrity were well and truly above the majority of our current crop.

Perhaps this cartoon can indicate the cause of our current dilemma . . .

The P M of Australia should be a coherent speaker, an uplifting source of encouragement and confidence. The P M of Australia [ or any country ] should communicate convincingly with the populace the policies and vision that the government pursues.
In our case the P M fails to be convincing. His speech is bumbling and inept. His attempts to encourage team Australia are alienating and confidence is falling.
When one marries this with policies that attempt to raise funds from the bottom end of town [ where the funds are scarce ] then the population rejects the P M.
What could be more predictable & for that matter more practical.

A dog in a manger government.