<em>Media Watch</em> watch: should targets get the right of reply?

The ABC's flagship media show has changed in recent years, to become less commentary and more journalistic in tone. And a former executive producer says that's down to a certain blue heeler ... 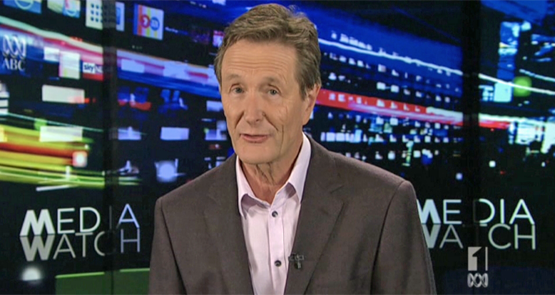 For critics of the ABC, Media Watch can embody everything that is wrong with the public broadcaster. Lecturing and out-of-touch, encouraging of ridicule of the media, hosted by lawyerly types who think they know best, the program can drive some to distraction, and frequently does. Its popularity with viewers only adds insult to injury.

Media Watch is a frequent target of the News Corp press, as the News Corp press is frequently a target of Media Watch. Sometimes the war between the two outlets reaches Senate estimates, as it did earlier this week. Picking up on a revelation in The Australian that Media Watch had not contacted Today Tonight before criticising the channel Seven show’s coverage of a study on the health effects of wind turbines, Nationals Senator Matthew Canavan asked if it was Media Watch practice to contact people before criticising them. It depends, ABC managing director Mark Scott replied.

“In operating as media critics sometimes something has been broadcast and Media Watch critiques it. They would not necessarily always go back and seek views on that, just like David and Margaret did not ask the filmmakers what they were doing,” Scott said.

But Media Watch, protested Canavan, is also journalism. “In my experience, good journalists come and talk to you first. They make the time to do that.”

Media Watch has always existed in a liminal position between criticism and journalism. Many of its greatest and most memorable episodes have been classic journalistic gotchas — ethical breaches uncovered through painstaking investigative work and delivered with a flourish. But week to week, the program’s bread and butter is criticism. Good journalism, even regarding media proprietors with column inches to spare, necessitates a right of reply. But good criticism does not.

Host Paul Barry tells Crikey there are two scenarios in which Media Watch feels it is necessary to approach those it covers for comment. Firstly, when alleging professional malpractice. “And we also do it when naming a particular journalist. That’s the time we absolutely do it.”

And anyway, Barry notes, critics of Media Watch don’t bother to contact him before they rail against the program.

But the fact that Media Watch does often offer a right of reply, says founding executive producer David Salter, creates something of a noose for the program. When Salter worked with founding host Stuart Littlemore — a retired journalist who, before hosting the show, was working as a barrister in Sydney — the program was far more a work of media criticism than journalism. Not that it never investigated things — it did so frequently. But the style was not that of a host who let everyone speak for themselves, but a host who took a stand and justified it at length. “The program we did was far closer to opinion writing,” Salter said. “You might call up people to help you form your opinion, but you don’t then quote all the sides at length in justifying why you think a particular thing. You just have an opinion.”

Giving everyone a right of reply, Salter says, takes up precious time on the program. And by allowing everyone the space to justify their actions or otherwise, he adds, Media Watch has “pooed in its own nest” and become journalism about journalism, which he says is “completely unworkable” and leaves the program “open to puerile fights with outlets like The Australian”.

Under hosts like Richard Ackland, Monica Attard and particularly under Jonathan Holmes, Salter says, the program took a more journalistic bent. But that has its problems, Salter says. “The minute you put your trade craft on the screen — ‘we rang so and so’ and the like — the minute you start doing that, then you are answerable to the fundamentals of journalism. I’m not saying Media Watch‘s editorial staff shouldn’t pick up the phone and do the stick-and-shovel work. But it’s the iceberg effect. You don’t need to parade the fact that you’ve done it.”

Of course, like all matters of style, there are differences of opinion. Ackland says the fact that Media Watch has moved to a more journalistic model — with people given a right of reply — makes the program more interesting. “I prefer the story to speak for itself,” he said. “I think the sort of lecturing style of Media Watch is a bit irritating. The story should give you the facts, and the audience can work out their own opinion.”

The program’s current iteration, Ackland says, is to present both facts and opinion — a throwback to earlier times. “Stuart Littlemore was ‘Mr Lecture’,” Ackland said. But he’s reluctant to criticise the program any further despite his personal preference for a more neutral presentation, saying the hosts have a very difficult job. “Whoever makes the program — they have to spend half the next week defending it. There are too many crybabies in the media. And Media Watch has a limited pool of victims, really. News Corp is the natural target, as are the tabloid current affairs shows. There’s always something there to question, or to tease.”

But Media Watch‘s producers and hosts are not solely to blame for the program’s move away from straight opinion. Asked what led to the changed style, Salter says: “Gerard Henderson”. Media Watch has had many critics over the years, but Henderson has perhaps been the most effective. In his 2007 book on the media and how it operates in Australia, Salter writes that prolific author of the Media Watch Dog column sent emails to ABC executives in 2006 imploring them that Media Watch should “desist from one-sided advocacy and facilitate genuine debate and discussion about the media”. At a speech given to the Sydney Institute later that year, Scott appeared to give credence to Henderson’s concerns:

“I have encouraged the director of television to work with the Media Watch team to review their format and content next year to ensure there is more opportunity for debate and discussion around contentious and important issues.”

Asked if he thought the program was hamstrung by the fact that it now had to seek comment and couldn’t operate exactly as it had in Littlemore’s day, Barry acknowledged “it was much easier in the good old days”.

“Stuart Littlemore said what he liked and rarely sought comment, but we can’t get away with that anymore. We’re still a program of opinion and we’re not afraid to make the call, but times have changed. We reckon it’s fair to give people a chance to respond if we’re attacking their reputation. In an era where the ABC is under constant attack — and there is a cumbersome complaints process — we have to be very careful to be even handed.”

“Does that make it harder to produce a sharp and interesting program? Yes. Does it make it impossible? No.”

Should the ABC apologise? It’s far from black and white

Media Watch report stands up to scrutiny in defamation case

Canavan is an “impartial expert” how?
[Why are the preciouses of the opinionated supercilious troll-setter hate/viewsmedia so sensitive when they get back even a little (13 minutes out of a week for the whole spectrum:their own dominance of the medium?) of what it likes, and thinks it has every right to toss (with little or no responsibility to, and in spite of, PCPs or similar “formal codes of conduct”) as it sees fit by “virtue” of it’s “superior prejudices”?]

Never said he was impartial. He merely raised a point I thought was interesting.

Moral of the story? Don’t respond to the myopic, anachronist bottom feeder – Gerard Henderson, who has more than enough column space, “think” tank “reports” and air time to spew his unintelligible opinion. Save it for detractors with some small vestige of credibility. Maybe Crikey could learn this lesson in respect to it’s published comments section.