Will News Corp try and bid for the New York Daily News? And other media tidbits of the day.

News Corp takes another bite out of the Big Apple. So will News Corp try and bid for the New York Daily News, to go with the Col Allan-edited New York Post for a pigeon pair of under-performing tabloids in the Big Apple? News and the Murdochs loom as the most logical company to attempt to buy the News after its owner, Mort Zuckerman, a billionaire real estate developer, put the paper on the market overnight.

Zuckerman told staff in a memo overnight that he had not been interested in selling the Daily News (which he has owned since buying it out of bankruptcy in 1993), but had changed his mind after receiving approaches several weeks ago.

A sale is not guaranteed, but Zuckerman has appointed the Lazard banking company to search for interested parties in the US and Europe. So who would buy? Well, the Murdoch clan is the most obvious possible buyer, but after Amazon’s Jeff Bezos bought The Washington Post for US$250 million in 2013, the list of potential buyers is long. Warren Buffett’s name will no doubt be mentioned, as his Berkshire Hathaway company has been buying newspapers in recent years — but they were local monopolies in the south-east and midwest, far from competitive markets. New York has four daily papers: The Post, the Daily News, The Wall Street Journal (owned by News Corp) and The New York Times. In addition, Newsday operates on Long Island and is owned by the Dolan family, which controls pay TV operator Cablevision as well as AMC Networks.

The Daily News is edited by Colin Myler, who edited the News of the World until Rupert Murdoch closed the UK Sunday tabloid in 2011 for its role in the phone-hacking scandal. It is doubtful he would want to work for the Murdochs again.

But while News Corp is the most logical buyer, to make a deal pay it would have to buy the Daily News and decide to close it or the Post to remove a competitor. That’s why News won’t buy — its non-Murdoch investors are increasingly agitating for the company to hive off its newspapers in the US, UK and Australia and concentrate on the broadcast assets and real estate listings Down Under (via the 62% owned REA Group) and the recently purchased Move in the US (with REA owning 20%). — Glenn Dyer

Butt of the joke? And most disgusting, and confusing, image of the day, goes to the subbie at the Oz who did this:

Words working with pictures, as they say. Thanks for nothing. — Guy Rundle

Clean sweep. Jihadi John made all the British papers …

Front page of the day. While the federal Labor party wakes up to this … 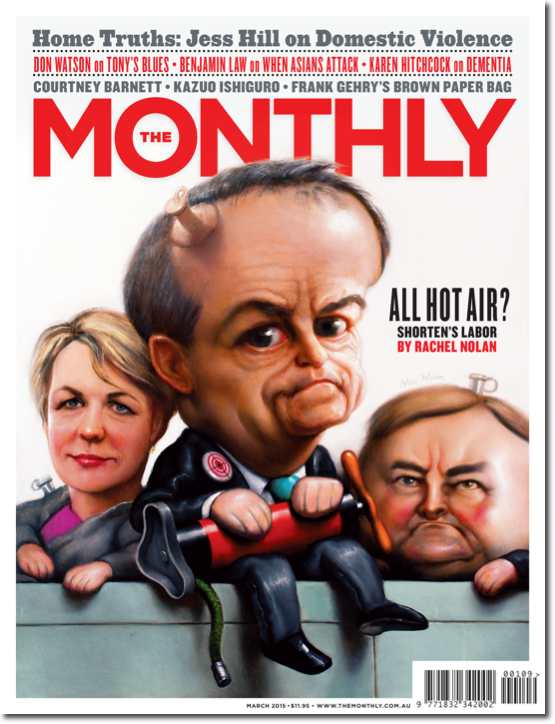