The most powerful man in Australian politics is not an elected politician. It's Chris Mitchell, editor-in-chief of The Australian. In strictly formal terms, the Prime Minister’s future will be determined by the Liberal party room, perhaps on Tuesday, perhaps at a future date.

The practical reality, however, is that it now lies firmly in the hands of a man who has no vote in the party room, no party status and one vote at elections. His name is Chris Mitchell, he runs The Australian, and he now finds himself — not uncomfortably — in the position of prime ministerial king-maker.

If and when Mitchell turns on him, the Prime Minister’s position will become politically untenable. As Abbott and his colleagues understand, painfully, no other person in Australia holds that power.

This is not a story about Murdoch conspiracies or abuse of media power. It’s simply the cold, practical calculus of Australian politics and media at its current juncture.

When Mitchell, with the support of his proprietor, Rupert Murdoch, and CEO Robert Thomson, decides the time has come to abandon Abbott — and they must be getting awfully close to that moment — the sheer momentum of that decision will create a fait accompli for Liberal parliamentarians. Not because The Australian has a large audience of marginal voters, but because of the perception — which has now become reality fuelled by perception — that if the paper moves forcefully against Abbott on its news and editorial pages there will be 18 months of hailstorms that, at least in the eyes of Liberal politicians, could spread into the News Corp capital city newspapers where the marginal voters live.

A strong prime minister with widespread party support could possibly withstand that kind of hailstorm, but not a dead-man-walking who is stumbling daily from controversy to controversy.

Mitchell (who lives for power), Murdoch (the supreme pragmatist) and Thomson (a brilliant journalist who even dresses like an undertaker) will pivot from Abbott not only because they know he is faltering, but because it’s an article of faith at News Corp to back winners. Which means determining the next winner and swinging behind him or her ahead of the curve.

Liberal MPs know this movie all too well. It happened in 2013 when Mitchell turned on Kevin Rudd, who, like Abbott, was his good friend. And Liberal MPs know, in their position of extreme weakness, the prospect of more than a year of shellacking from News Corp’s flagship and possibly metro dailies would be a full-strength cyclone, not a hailstorm.

The omens for Abbott are not good. Last Saturday, The Weekend Australian unleashed its attack-dog reporter John Lyons onto the PM and his chief of staff in a package of stories, splashed across page 1, that must have felt like a kick in the groin to the PM. After all, it was Lyons who first revealed the dysfunction inside the Rudd government that ultimately led to the demise of two Labor prime ministers.

The PM desperately needs to keep Mitchell on side, which is why his brute aggression on issues like human rights and terrorism — both bete noire topics at The Australian — suggests he knows the script.

The question is, will he still have a role in that production? 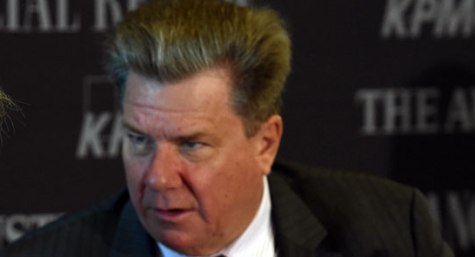 Surely “the most powerful man in Australian politics” – only having to influence the perception of, and deliver, “5”% of the vote (the majority of swingers) and government – isn’t elected, an Australian or in Australia much at all?
Isn’t this “Punch”, his puppet – where’s the string-pulling puppet-master? How long would Punch hang around if he crossed Rupert’s g-string?
If Rupert’s Limited News Party is going to win the next election he’s going to need a new jockey? Abbott’s “wasted” beyond the limit?

[And isn’t a “good friend in the media” an oxymoron? What did Rudd say Bush said, on the other end of that phone- call taken at the Kirribilli Shack….?]

This is the only real story at present. Murdoch wants Credlin gone and he wants his agenda legislated and if that means bringing down Abbott he will do it.
I am unsure if he is really interested in Credlin, but Abbott defied him. In Murdoch’s world there are only winners and losers and winners obey instructions.
The subtext to this is that the next Liberal leader will be in no doubt as to who his or her political master is. If they want to remain leader they will do as instructed or they will be thrown out.
The next Liberal PM will not be appointed by Australians or the Liberal party, they will be anointed by Murdoch and their tenure will be determined by how compliant they are.

Maybe Rupert or Chris could make Tony and ‘offer’?

This is simply outrageous.
When are this lot in parliament going to grow a pair? As I understand it, the UK pollies have overcome this situation by ALL refusing to be ‘endorsed’ by Murdoch. In fact, it is politically poisonous to have anything to do with him, after the phone-hacking scandals over there.
We desperately need to rid ourselves of this malevolent influence, even if this means naming Murdoch as NOT a fit and proper person to hold media outlets in this country.
After all, he is a foreign national!

or it could be a crock…Abbott’s downfall is of his own making, nothing to with the Oz, Mitchell or Rupert…Labor’s poor showing at the end of their term got him into power and the current situation that the PM has created will see him shown the door…. and good riddance.