The ABC slams the unions ... Michael Danby is again unopposed ... Ian Macdonald says old journos should get off his lawn ...

ABC v unions. ABC staff received an email from acting director of people Alan Sunderland yesterday afternoon informing them of the latest developments in the broadcaster’s negotiations with unions over the “Hunger Games” redundancy process. The unions had taken the ABC to the Fair Work Commission over the process, and a meeting that was meant to take place yesterday was postponed to next week. Sunderland took a swipe at the unions, saying it was their moves that were adding to the uncertainty and delays:

“We’ve said no because we have consulted extensively including on the pools process and we do not believe it is reasonable or appropriate, or in the interests of the organisation, to delay implementation any longer. Now the unions want us to pause while they wait until the Fair Work Commission conference to discuss the pools issue. The unions have strongly objected to the pools process, but when we met yesterday were not willing to discuss any specific concerns either with the process or with our response to their alternate proposal.”

Danby can breathe easy. It was reported last week that Amanda Stevens, the mayor of Port Phillip Council, was challenging Labor MP Michael Danby for preselection for the federal seat of Melbourne Ports. But the challenge has so far been short lived, with Stevens banned from the party for six months over a picture she uploaded onto her personal Facebook profile on last year’s state election day. Last night Stevens sent an email to all local branch members explaining her side of the story:

“Andrew Porter, a former electorate officer of Michael Danby, filed a complaint against me on Friday 20 February. Porter alleged that I had been ‘disloyal’ thereby breaching the party rules that on the day of the state election 29 November 2014,I handed out material for a non-Labor candidate in the seat of Brighton. Images were taken from my personal Facebook page that shows my family handing out material for Cr Jane Touzeau at Hampton Primary School. On the same day there are other images of me standing with Martin Foley. The local paper also tweeted images of me congratulating Foley that evening at the Port Melbourne Bowls Club.

“It is important to note that these Facebook posts have been on my page since the date of the state election on 29 November 2014. Some three months later, the complaint has been made the day after submission of my nomination for pre-selection in the seat of Melbourne Ports. I believe that the motivation for the complaint is to disqualify me from the preselection process against Michael Danby.

“Cr Touzeau stood as an independent, unaligned candidate in the seat of Brighton to raise awareness of the issues surrounding coal seam gas in Victoria. Cr Touzeau and I have been fellow Councillors at the City of Port Phillip for the last two years. The seat of Brighton is held by Louise Asher by a 14% margin prior to the state election and a 9.8% margin after the state election. I believe I was helping out a friend increase awareness of an issue that she feels passionately about. There was no possibility of taking any votes or a win from Louise Crawford, the ALP candidate in Brighton. For these reasons, I do not believe my actions constitute ‘disloyalty’ to the party.”

We spoke to Stevens this morning, and she told us she was investigating her options for her appeal. She said she wasn’t being critical of the party or the sitting member but that she just wanted to take part in the process. We’ll be watching this space.

Who’s Macdonald calling old? Following many sections of the media (including Crikey‘s editorial) condemning Senator Ian Macdonald on his appalling appearance at Senate estimates on Tuesday, where he berated and interrupted both Professor Gillian Triggs and his fellow senators, Macdonald released this press release defending himself:

And if you were wondering about sexism, it was just a coincidence he was yelling at women, just like it’s a coincidence all the people who get promoted “on merit” are men:

Civil discourse on Facebook! Sydney Liberal MP Fiona Scott (you remember her) hosted a Q&A on Facebook yesterday with Foreign Affairs Minister and emoji connoisseur Julie Bishop, where they answered questions on everything from foreign affairs to the local parks and pools in the seat of Lindsay. Most of the questions were Dorothy Dixers and were answered as such, like this one:

That in itself isn’t all that interesting, and most of the answers were pretty straightforward. What we did noticed was how different this session was to a similar one hosted by then-prime minister Julia Gillard in 2012, where she was asked about her pubic hair, her recently deceased father and told to “lube up”. This got us thinking — have we really improved the tone of debate this far in less than three years? Unlikely. Were the sexist trolls just busy elsewhere? We put a call in to Fiona Scott to double check if she had deleted any comments and Scott told us that along with having a fairly strict filter for expletives, she had only banned one person from posting on the page (after she read his comments to us we’d delete them too). Scott said she worked hard to engage with people on social media and the overwhelming majority of people who interact with her page kept things civil. While we’d like to believe that internet debate has advanced somewhat, it really just shows the effect that bloggers like Larry Pickering and Co really had on the debate around Gillard when she was PM.

Data not retained. This piece was both published and removed by The Guardian yesterday, with the ominous note “this article was taken down on 25 February 2015 pending investigation”. The headline says it’s about internet pirates and data retention, but we can’t tell you much more than that. We emailed The Guardian‘s Australian editor-in-chief Emily Wilson to find out what had happened, but didn’t hear back by deadline.

Abbott takes after Obama. Activists in Sydney have erected this billboard of Tony Abbott in Regent Street, Chippendale, this week. And according to their website, we can expect more of this in Melbourne and Canberra as well as smaller posters that punters can take home. 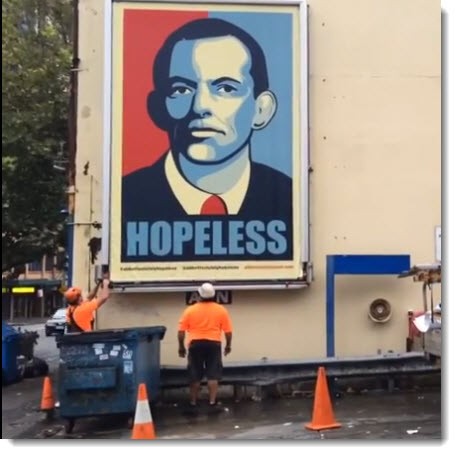 Cutting the migration rate won’t fix our infrastructure, but what will?

The billboard needs tweaking – with the baby blue necktie ….