Rundle: <em>American Sniper</em> is the self-hating nihilism of a nation in decay

American Sniper's alleged anti-war complexities are nothing more than self-pity from a nation that's lost all meaning. 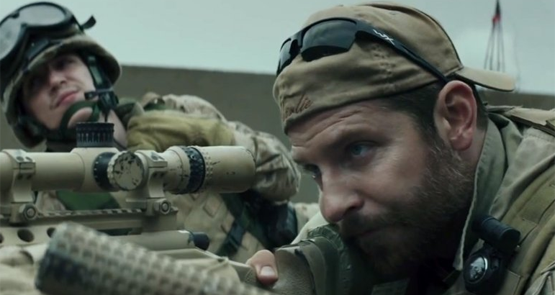 In 1941, the United States entered World War II. It was scarcely a struggle for national survival, but it was a national mobilisation, and all efforts were bent towards it — not least movies and popular culture. The biggest movie of that year was Howard Hawks’ Sergeant York, the largely true story of a World War I hero, Tennessee mountain boy Alvin York, who had knocked out a German machine nest that was annihilating his company. Straight story, but there was a twist. York had initially been a conscientious objector and had fought hard to stay out of combat on Christian principles, but eventually he had a change of heart. The film uses this to argue against isolationism, and for joining the war in Europe — but it gives the anti-war case a pretty fair hearing.

The filmmakers had sufficient confidence in the justice of their case to field the opposition. The hero was also of its time: York’s single passage of great heroism — which he dismissed as “one thing that happened on a 50-mile front” — would barely qualify as a pre-credit taster in a war movie today. Nor its denouement: York killed four Germans, and took 130 prisoner, a difficult thing to do. After the war, he let his story be written (by an Anzac, Tom Skeyhill) and filmed to fund an agricultural school he’d founded in his dirt-poor Tennessee home county.

Fast forward 70 years and another American hero is in the news; the late Chris Kyle. The American sniper, hero of the movie American Sniper, was murdered two years ago at a shooting range. Yesterday his killer, Eddie Ray Routh, was found guilty and sentenced to life without parole. Routh was an Iraq veteran too, suffering from post-traumatic stress disorder (PTSD). Kyle had also suffered from PTSD. The shooting range he was killed at was one he’d set up — as therapy for veterans with PTSD. Meanwhile American Sniper, the Clint Eastwood movie that details the life of this man who killed more than 300 people at a distance during four tours of Iraq, goes on to become the biggest-grossing war film of all time.

The story is being reported without much comment in the States, which is a measure of how debased, degraded and self-destructive the core of its culture has become. I mean, what were the odds that a sniper whose brutal military task had been celebrated as an expression of heroism — augmenting the notion that lethal force was some sort of expression of self — would be shot dead at a shooting range? What sort of a predicament has a culture got itself in that it treats this sort of event as business-as-usual, rather than something so tellingly hideous, but also so grimly, macabrely funny, that everyone should not stop what they are doing and retrace their steps?

Alvin York used a fame he didn’t want to start an agricultural school beating swords into ploughshares. Tennessee was poor when he grew up and got less so over the years of the New Deal, which he supported. Technically, the whole of middle America is “richer” than it was when York had finished his work, but of course it isn’t. No point setting up agricultural schools or apprenticeships, because there’s no industry across vast swathes of the place. No settled community to go back to as York did — and no settled souls coming back to them either. Many men came back traumatised from World War I — PTSD was born as shell-shock — but returning to more integrating communities, many had less of a burden to bear — and ultimately put down. The ultra-high-tech nature of war and the hall-of-mirrors hyper-individualist culture soldiers return to leaves the horror inside the head. No wonder suicide is now by some degree the greatest killer of US soldiers, years after the Iraq War concluded. Twenty US vets kill themselves every day, 500 a month, 6000 a year. From the grave, Saddam is still waging war on the streets of a thousand American cities and towns — and winning.

Such a level of carnage would make any rational society reassess how culture and self fit together, and what one might do in a society that has hundreds of thousands of trained killing machines wandering around superannuated, alienated and shunned. There may be some transitional value in a program like a shooting range for vets, but it’s a pretty desperate thing for a culture to light on as a solution. It admits the failure of any possibility of such people, at that time, relating to the real, focusing instead on providing a vestigial fantasy world they can attach to. Yet at the same time, the poor sods caught up in this mess are judged by the standards of a Puritan culture that has less scope than most for acknowledging degrees of impairment or mitigation.

Thus Eddie Ray Routh, a PTSD-affected man, whom Kyle himself is on record as calling crazy and dangerous, faced an either-or. He was either insane according to the strict psychosis-based standards of legal insanity — thought he was God slaying a lizard-man or some-such — or he was 100% responsible for his actions. Judged as the latter — by a jury that included members who had already seen the movie American Sniper — he has now been sentenced to life without parole. He is 27. Much of it will be served in solitary confinement, and as it is a natural life term, all efforts will be made to remove the possibility of suicide. This is the end-point of the “penitentiary” system as devised by the Quakers in the 1800s — punishment as isolation, so that the prisoner may be penitent and come to know God. In a culture both godless in form, but with a simplistic fundamentalist god as content, that itself becomes an invitation to psychosis. The madness Routh did not have in sufficient quantity to get him confined to a psychiatric hospital will most likely come on him as a mercy.

When Kyle’s widow heard the result, she said that God had acted for them. So in other words, much of the culture is psychotic in an authorised manner, as part of everyday life. The master of the universe directed the actions of one trial in America once — so that one man could be thrown into a hell of a specific type. It’s a hell arising from the systematic deprivation of all that makes us human, while meticulously maintaining the animal substrate — thus making it possible to keep someone living for decades without hope, without love, without meaning, and with boundless time to contemplate the life they will not have. It is nothing other than a form of human sacrifice that is the necessary counterpoint to the failed promise of “freedom” in American existence. The only way people can feel some juice in a deadened notion of freedom is to have a punishment — beyond punishment, a torment — so atrocious, terrifying and abysmal that it produces meaning through catharsis.

With that deadened freedom, they will stream into the multiplexes to see American Sniper –– a film whose alleged anti-war complexities amount largely to a form of national self-pity over lost idealism: Clint has simply made the very last Vietnam war movie, and set it in Iraq. For most cultures, heroism has usually meant the fair fight between your champion and your enemy’s, as equals — from the earliest myths, through David and Goliath to the lightsaber battles in Star Wars, heroism has included a notion of reciprocity and recognition. Snipers may be a necessary part of total war, but what they do is scarcely heroic. American Sniper allows its audience to see Americans as superheroes, which is quite a different sort of hero, quasi-gods wielding life or death at whim. What they can’t win on the ground, they win on the screen. The idea that capturing enemy soldiers might be doubly heroic would come across as incoherent. And those who returned from the fight are stepped over on the way out to the car, or thrown into the pit. From Sergeant York to Chris Kyle, from farm to famine in a century. Cast the eye of pity, and thank your lucky stars you don’t have this to deal with, at the heart of your national life.

From Ellen to MDMA: what defines a person these days is changing before our eyes

Guy, you usual propensities give even movie ‘reviews’ an unusual taste.

Great article Guy. It’s been one after another lately. Probably the best essay writer in Australia today.

For a (congruent) analysis from the US see Larry Beck’s blog, Hard Left Turn Failed Sniper

I agree with Simon.