When is "formally putting on the table" not offering something? When it's not in the government's interests to admit it. 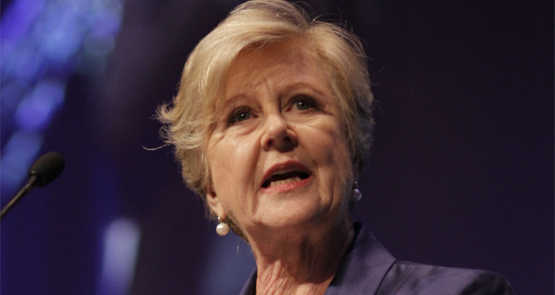 The Moraitis Affair gets curiouser and curiouser, at least in the linguistic sense. It is a matter already characterised by extraordinary contortions of ordinary meaning: the Secretary of the Attorney-General’s Department says he told the President of the Human Rights Commission that she had lost the confidence of the Attorney-General, and that he thought her resignation was “one option” as a consequence of that, then told her the Attorney-General “wished me to point out that the government was prepared to consider a specific senior role” for her, but he didn’t ask her to resign, even though “one could not fulfil the second legal role while doing the first.”

Triggs’ evidence is quite different: Moraitis asked her to resign and offered her another job. Simple.

Now, apparently, there never was another job. Julie Bishop, representing the unfortunate George Brandis in the House of Representatives, told Parliament yesterday “no such offer was made”. When asked further questions, both Bishop and the Prime Minister stopped referring to “offer” and switched to “induce”. “The president of the commission has not been asked to resign and no inducement has been offered,” Abbott told Parliament. At no stage did Labor use the term “inducement”.

“Induce”, as Triggs noted in her Estimates evidence on Monday, is “a term of legal art” that she preferred not to use. It doesn’t appear in the relevant sections of the Criminal Code relating to corrupting benefits offered to a Commonwealth public official, but the meaning is clearly relevant to the prohibition on dishonestly offering a benefit to such an official with the intention of influencing them in the exercise of their duties.

What did Moraitis say? He didn’t use the word “offer” at any stage in his evidence on Tuesday. This is how he described telling Triggs about the second job.

“There were essentially three points that I was asked to make. One was that the Attorney had lost confidence in Professor Triggs as chairperson. He retained significant goodwill towards her and had high regard for her legal skills. In that respect, he was asking me to formally put on the table or mention that there would be a senior legal role, a specific senior role, that her skills could be used for.”

“Mention” may not be an offer. But you’d be hard-pressed to argue “formally put on the table” is not an offer, especially the “formally” part (“formally” being a word of some interest in another context, of Abbott’s unilateral invasion of Iraq).

Also problematic for the “no offer” argument is that Labor senators Penny Wong and Jacinta Collins and Greens senator Sarah Hanson-Young constantly used the word “offer” to Moraitis at Estimates and at no stage did he quibble about it. It was only George Brandis who, belatedly, began insisting towards the end of that section of the hearings that a position hadn’t been offered. But his objection seemed to be about the word “position”, not “offer”.

Wong: Was there anyone else you had a conversation with in the department about the two points — that is, the lack of confidence and the job offer?
Moraitis: No.
…
Wong: Mr Moraitis, I am not trying to be difficult. When I asked you which position was offered, the advice from your FAS was that there were reasons you could not tell me that. I am not asking that of you now, but I am assuming that he gave that advice knowing what the position was.
Moraitis: No, I asked–
Wong: So, he does not know the position? So how can he give the advice if he–
Brandis: The more accurate characterisation, if I may say so, is “role”.
Wong: Well, I am happy to use “role” if that would be easier. Okay. Are you telling us that Mr Reid gave advice to you that you could not tell this Senate committee which role Professor Triggs had been offered without knowing what the role really was?
Moraitis: Yes.

So according to Moraitis and Brandis, a “role” for Triggs was “formally put on the table”, although they didn’t quibble with the word “offer”. But according to Julie Bishop, presumably reflecting the briefing given her by Brandis’ Department — and remember she too is a lawyer — no role (that was the word used by shadow Attorney-General Mark Dreyfus when he asked the question) was offered.

How you “formally put on the table” something without “offering” it is a mystery that would surely tax even the greatest medieval philosophers. The whole point of putting something on the table is to offer it, otherwise it’s mere adornment. That Moraitis used “formally” merely confirms the fact that it was indeed an offer.

If only we had Moraitis’ notes from the meeting. But they’re not on the table, formally or otherwise. They’re missing, alas.

The murky business of the Moraitis offer

‘Brandis should stand aside’: who’ll take the fall for Triggs ‘inducement’?

Are Brandis, Moraitis and Bishop rehearsing a sketch written by Clarke and Dawe?

Has anyone stepped out with Moraitisgate yet?

Due to funding cuts and satirical redundancy, Brandis and Moraitis will replace Clarke and Dawe for gratis every Thursday starting tonight at 6:56pm.

The Collective seems united today in pretending it’s too difficult for them to understand they’re treating the issue in a manner reminiscent of Bogart’s performance in The Caine Mutiny.
At least he didn’t claim his performance was about the real world.

When documents go missing that relate to your corrupt processes, that is corruption in itself for a very senior public servant – I think the AFP should treat this matter very seriously indeed.
There is clear evidence here of Brandis, Bishop and Moraitis conspiring to at least mislead the parliament, and probably cover up illegal acts.