Is MH370 in Kazakhstan? On faking that crucial ping

All of the searches for missing Malaysia Airlines flight MH370 are assuming the plane turned south. But what if it turned north? 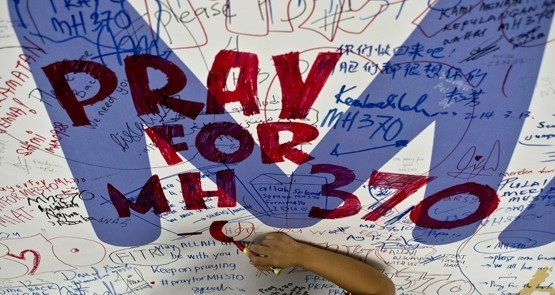 One of the most careful dissenting voices in the MH370 mystery is American science writer Jeff Wise, who this week published a study of tractor work on a patch of earth in Kazakhstan that matches the dimensions of the missing Malaysia Airlines Boeing 777-200ER.

However, Wise doesn’t back the conclusion that this is where MH370 ended up after it vanished on March 8 last year early in a flight from Kuala Lumpur to Beijing with 239 people and some secret under-floor cargo consignments on board.

Instead he deals very closely with what satellite imagery shows was happening at the Yubileyniy Aerodrome within the Baikonur Cosmodrome in the months before the flight vanished, and the days afterwards.

The imagery is intriguing, but also very expensive, so it isn’t going to be reproduced in any way here without permission or fee. But the Jeff Wise blog is free, and to understand fully what he is discussing, it is essential to read it here.

To give this context, Wise has also been developing a theory: that is, trying to come up with a convincing, technically feasible scenario under which the satellite ping data that has led searchers to believe MH370 eventually turned south and flew to its doom in the south Indian Ocean was intentionally faked to mislead any investigation.

There are some huge problems with “ping” spoofing beyond those that Wise acknowledges in this latest intriguing post. If the southwards turn of MH370 was spoofed, it begs the motive and resources of those responsible, and takes the disappearance into the realm of a major long-term project to “disappear” a commercial flight months in advance, while anticipating that Inmarsat and the Royal Malaysian Air Force would independently or otherwise come up with observations that in part or full supported the conclusion that this had happened.

It also implies that MH370 successfully evaded the civil and military defence radars of India or China or both, depending on the route flown, and then landed in what Wise describes as the large and derelict wastes of the Baikonur Cosmodrome, which has been in action since the launch of Sputnik 1 at the dawn of the space age on October 4, 1957.

Baikonur is vast, and Yubileyniy and its big runway were built for the USSR’s version of the space shuttle, the Buran, and idled on the demise of the project in 1989. However, Baikonur is highly active, with numerous launches, and the arrival of a 777 could not have occurred unnoticed without the knowledge and active involvement of modern Russia, which has leased the rocket range and its many facilities until 2050.

Thus the Yubileyniy scenario would have involved extraordinary planning, based on an intuitive prediction that Inmarsat would eventually mine the satellite “ping” data from MH370 to determine its course, requiring the sending up of a decoy plane transmitting false data to deceive the satellite, and organising the onboard seizure of control of the flight, all many months in advance of a crew duty roster, passenger list or cargo manifest having been determined for a flight that could easily get cancelled or run late.

However, none of these issues mean it couldn’t have happened, assuming Russia had a powerful motive, and that the spoofing tech that Wise is working on had been devised, practiced, perfected and deployed.

In the Yubileyniy scenario, the jet would have landed on the concrete runway built for the Buran spacecraft, been towed a short distance away, and very quickly dismantled and buried. Quickly, because as Wise notes, Baikonur is a flat, treeless desert, and it is the last place you could hope to hide anything from a surveillance satellite, especially in winter, when it is all snow or barren, frozen earth picking up the shadows cast by a low sun.

Which raises the other alternative to spoofing; that the Inmarsat data being relied upon contains fatal inaccuracies that mean the correct conclusion that the jet flew south may contain margins of error amounting to many tens of kilometres away from the nominal seventh arc of initial impact possibilities.

If this terrible suspicion about inaccurate Inmarsat data is true, it might take a decade or more to search the south Indian Ocean floor with the required resolution to find MH370′s wreckage. Or the searchers might get lucky.

The ship-tracking work being performed by Mike Chillit, who can be followed on Twitter @MikeChillit, has been capturing that terrible possibility in regular graphical updates.

Chillit’s update on Monday (below) shows just how much more sea floor might need to be scanned in order to fully eliminate the current focal points for the Australian managed search effort. 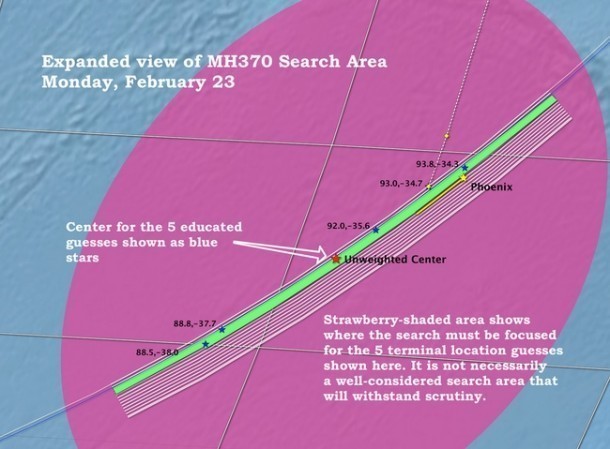