Tony Abbott is now incapable of any response to policy issues other than attack. Now he's turned his sights on foreign investment. 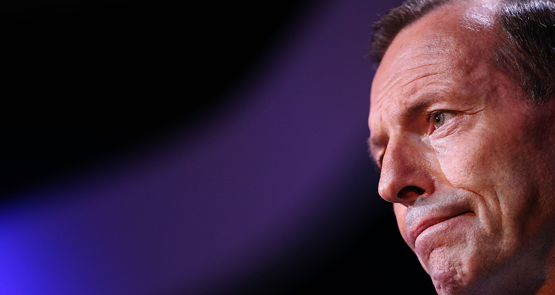 Yesterday, it was all about foreigners for Tony Abbott and Joe Hockey. They mentioned foreigners seven times in Question Time. There were three Dorothy Dixers about foreign investment, including one to Warren Truss. Earlier in the day, Abbott travelled to Kogarah in suburban Sydney with Hockey and backbencher Nick Varvaris, whose sole noteworthy contribution to public life since he was elected in 2013 has been to accidentally vote with Labor in a division. Notionally, Abbott and Hockey had gone all the way to Sydney to launch a Treasury options paper on foreign investment in residential property — at $3000 for the trip, making it the most expensive options paper launch in history — but in fact it was to talk about … foreigners.

Abbott isn’t concerned about just any old foreigners, but specifically “foreigners who aren’t playing by the rules”. Labor, it appears, had been appallingly slack when in government. “Under the former government, for six years there was not a single legal case against a foreigner buying a home. There was not a single divestment order made for a foreigner buying a home,” Abbott lamented (presumably no foreigner had ever bought residential property before 2008). An “application fee” — running to thousands of dollars, and potentially tens of thousands of dollars for properties in the Sydney market — would be imposed on foreigners purchasing property. “If a local is bidding against a foreigner for a new property, then the foreigner has to pay $5,000 more than the local,” Joe Hockey beamed. But also, Abbott noted, the application fee was “there to ensure that foreigners are paying their way.” Call it reciprocal obligation for foreigners.

It’s an appropriate split — Hockey emphasising the price signal, Abbott emphasising the moral importance of “paying your way”. It’s bad enough that foreigners compete against Australians to buy homes, of course — but those who “aren’t playing by the rules” or not “paying their way” are in the sights of the government.

The notion that foreigners are crowding out Australian home buyers is the economic equivalent of the idea that hundreds of thousands of asylum seekers are crowding into western Sydney and using infrastructure made for proper Aussies, and about as true — except it is encouraged by both Left and the Right commentators. Except, foreign investment in residential real estate flows predominantly into funding new housing stock, not buying existing housing stock — unlike domestic investment in real estate, which flows overwhelmingly into existing stock. That is, those evil foreigners do far more to remedy the basic problem of housing affordability — that we’re not building enough homes — than those of us who actually live here do. And the whole myth of first home buyers being priced out of the market — whether by foreigners or anyone else — has been skewered by Michael Pascoe.

If it were Americans and Canadians and Brits doing all the buying — which it long was, and they spent around $10 billion in 2012-13 buying housing — you can bet no one would be concerned. These measures are driven by Chinese — or more accurately, “Asian” investors from places as diverse as China, Hong Kong, Malaysia and Singapore.

It’s also protectionism. Not “new protectionism”, hidden behind subsidies and dumping rules, but the old-fashioned type — foreign investors will face a tariff if they want to import their money into the property market. Presumably the economic commentators who would have screamed if Labor had resorted to such blatant, crass populism will be preparing their op-eds.

Not bad for a country that is “open for business”, to send a blatantly xenophobic signal to foreign investors that they’re not welcome. To the extent that it deters all foreign investment in housing, it will actually make housing more expensive, because it will reduce a key source of funding for new housing stock. To the extent that it deters only purchases in existing stock, Australian homeowners will receive lower prices for their assets. They can thank Tony and Joe for seeing off the evil threat of foreigners giving them lots of money.

This of course is a key component of the Abbott recovery strategy in action: target foreigners and anyone who looks foreign, regardless of the cost. Targeting foreign investors might reduce investment in new housing; targeting the Muslim community might reduce the demonstrated and applauded (by Julie Bishop) willingness of that community to criticise extremism and work with authorities to identify potential threats, but Abbott is eager to do it anyway.

It also reflects, however, that Abbott is now incapable of any policy or political response other than aggression. The Abbott who said he would “shirtfront” Vladimir Putin (then wimped out face to face), who contemplated sending a major military expedition to Ukraine and unilaterally invading Iraq, is now the only Tony Abbott who’s available. After a brief flirtation with bipartisanship on national security in 2014, Abbott now regularly attacks Labor on terrorism. Gillian Triggs is attacked for revealing the extent of sexual abuse of detained children in Australia’s bipartisan asylum seeker policy. Foreign investors are attacked, the Muslim community is attacked, people who get the benefit of the doubt are attacked.

Chinese real estate invasion? Not according to the data, fellas

(I was going to expand, but, really, Abbott is doing it all himself!)

If he was serious about this, and not just dog-whistling again, he’d can the FTA discussions. You won’t see that happen though, worse luck.

Crikey seems to be adopting its consistently blinkered approach to any issue more complex than pumpkin pie recipes.
Loyal Acolyte Mike Smith even adds flavouring to this thread’s pot by showing he apparently has no idea why it’s not only Coalition Governments which have understood the need in the modern world to incorporate FTAs into Government Policy.
The international scene is in a constant state of flux, and responsible Australian Governments formed by either side of Parliament have to be revising their policies on ,among other things, real estate development rules.

A FTA in return for, say, submarine sales??