Lambley was elected to represent the Country Liberal Party for the Alice Springs seat of Araluen in the Northern Territory Legislative Assembly in a byelection in October 2010. Following the CLP’s win at the August 2012 state election, she was promoted into the position of deputy chief minister by Terry Mills over the eminently capable Kezia Purick, now Speaker of the Assembly.

Lambley fell on her sword in early March 2013, and Mills was dumped as leader in an ugly coup that shoe-horned current Chief Minister Adam Giles into the job. Lambley has variously served as treasurer (under Mills) and education and health minister until being dumped following her active role in the recent failed coup attempt against Adam Giles’ leadership.

There has undoubtedly been bad blood between Giles and Lambley for some time, but Lambley’s role in the coup drew this comment from Giles, as spoken in the leaked recording of a meeting with Alice Springs CLP branch members:

“I sacked Robyn [Lambley] because the things that Robyn has said about me about Tamara and about the accusations that have been made I found to have been horrendous and I’ll never work with that woman again, ever.”

Earlier this week, Lambley — already on a show-cause from her local party branch as to why she shouldn’t be thrown out of the CLP — rose in parliament during a Labor no-confidence motion and launched what for mine is the most remarkable parliamentary spray at your putative colleagues … ever.

Here are a few choice excerpts. Lambley’s ire was most firmly focused on Adam Giles:

“Nine members of his team decided they no longer had faith in his leadership. Nine out of 14 CLP parliamentary wing members voted to have him removed from the position of Chief Minister. Just 22 days ago, Adam Giles lost the support of a majority of his colleagues.

“He was voted out. His colleagues generally felt he had lost touch with average Territorians, he was arrogant and his general dishonesty was eroding any respect we had for him …

“Adam Giles is not the legitimate leader of this government. No vote has been taken in the parliamentary wing since 2 February 2015. Willem Westra van Holthe remains the anointed leader based on that vote on 2 February …

“I have no faith in a government lead by Adam Giles. I have stated publicly I believe Adam Giles has no integrity. I stand by that statement, and that alone is enough to mean he should not hold a position of community leadership.”

Lambley was no less forgiving of her — almost certainly for not much longer — CLP colleagues.

“Certain members of this government, and even the federal Parliament, do not seem to understand the community expects more from its leaders than getting drunk at topless bars or telling bare-faced lies.

“In addition to having no faith in the Chief Minister, I have no faith in the Treasurer and nor do I believe he is an appropriate person to be a leader in our community. With this in mind it would be disingenuous and dishonest of me to provide support to a proposition that leaves these people in leadership positions.”

Lambley also took time to reflect on her own position and service to the CLP and the Northern Territory.

“Is this a case of sour grapes? No! Being dumped from cabinet came as an enormous relief. No more second-guessing the Chief Minister, no more wondering what we have not been told and no more wondering what is truthfully going on. If I was not dumped, it was just a matter of time before I walked. Integrity and honesty is everything to me.”

For Lambley, Giles has a lot of work ahead of him to retain his leadership, including repairing some other broken relationships:

“A starting point for Adam Giles is to apologise for the terrible accusations and allegations he made in the Alice Springs Country Liberal Party branch meeting on 4 February 2015. He defamed and damaged the reputations of myself and many other colleagues. He breached the confidentiality of the parliamentary wing. He needs to apologise without reservation to the Northern Territory Police Force. He needs to apologise to his colleagues for casting aspersions on our credibility and conduct.”

You can read the whole of Robyn Lambley’s speech at The Northern Myth. 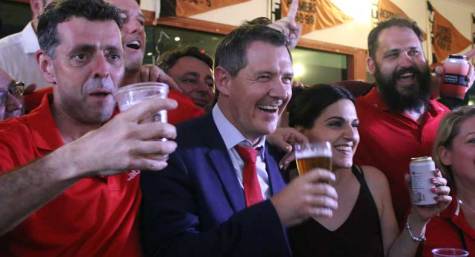 Who wants to be chief minister? NT govt a rabble without a leader