Eric Abetz struggles to internet ... NUS takes another funding hit ... frying the competition at the cricket ...

Read all about Abetz . Fans of popular Tasmanian Senator and Industrial Relations Minister Eric Abetz will be finding it hard to follow what he’s up to as the link-shortening program he uses has been bought out from under him. For a small fee, URL shorteners — critical for distributing material on Twitter — can be personalised to fit the profile of your company or public profile, or even if you’re just a lightweight, easily amused media figure. But Abetz’s office let his ownership of the shortener abtz.mp lapse, and one quick-thinking IT industry figure picked it up for a song. Links using the shortener, such as the one in this tweet now go to a somewhat different location than Abetz or his staff had in mind. Yesterday the links were sending users to the Wikipedia page for Otto Abetz, the Senator’s great uncle, who was the Nazi ambassador to France. Today the links go to an article on the Tasmanian Times website detailing an email argument between Abetz’s brother and John Hawkins. We understand Abetz’s office is — understandably — keen to buy abtz.mp back.

Less money, mo problems. We reported last year that the finances of the National Union of Students were in dire straits, with deficit in the tens of thousands at the end of the last financial year. The situation came to light at the NUS national conference, where accusations were made that factionalism and poor management were to blame. At the time the peak student body in the country said it was taking steps to reduce the deficit and that it wasn’t as bad as it seems. The NUS bottom line has had another blow though, with the University of Melbourne Student Union cutting its NUS affiliation payment to $55,000 — down from the $106,000 paid last year. UMSU’s newly elected president Rachel Withers is from a clubs and activities faction after years of the union being controlled by Labor-aligned presidents. We’ve also heard rumours that the University of Sydney and the University of Western Australia could cut their affiliation payments. UWA tried to cut its affiliation payment last year. We spoke to new NUS President Rose Steele to ask if the cut in the payment from UMSU was affecting the bottom line and she said “obviously it’s a blow” but was pretty sanguine about the future of the union’s finances. She said they weren’t in debt, but had taken a range of measures to cut costs and were looking at grants to increase revenue.  We’ll be watching with interest.

John Howard and caravans. What’s an ex-PM to do with all that spare time? Buy a caravan and a 4WD and head up the coast for some grey nomad adventures? It seems that is John Howard’s retirement plan, with the ex-PM to appear at the National Conference of the Caravan Association of Australia. He is addressing the National Caravan Conference on the importance of caravanning and camping in Australian history. Howard’s not the only big name on the bill — Eddie McGuire will also be speaking on the topic “be bold” — we hope he’s talking about the importance of bright pink caravans.

Working out the pecking order. The Cricket World Cup is just two weeks in (and we’ve got a whole month to go), but we hear that feathers have already been ruffled by what delicacies are available outside the grounds hosting the world’s best cricketers:

“KFC and the ICC have stopped the food vans outside the MCG from selling chicken. Chicken was sold for the first two games. Suits not unlike Transit police were taking photos of the bain maries. Alas no chicken! KFC outlets inside will be selling Zinger pies and god awful popcorn chicken.”

We asked the ICC’s media team what the go was with the chicken and we’ll update you when we hear back.

Never mind … There seem to be issues at the Australian Taxation Office when it comes to storing the email addresses of tax practitioners who receive alerts from the agency. We hear from a tipster that the ATO sent out an email on Monday telling accountants that their email addresses would be stored by newsletter company Campaign Monitor, which is based in the Unite States. Alarmed, our tipster told the ATO that could lead to privacy concerns. Come yesterday the ATO sent a second email to tax professionals, saying:

“Thank you for your feedback and bringing to our attention your concerns about the protection of your email addresses when using the proposed new email alert service, which we advised you about yesterday. Unfortunately the advice we provided on this was incorrect and should be disregarded. The email service is designed to provide you with a new way to receive alerts and will be in addition to the current SMS service.

“Over the coming week we will be working with representatives of your professional associations and some tax practitioners to clarify and refine our approach to this new service.

“For now please disregard yesterday’s email titled ‘Tax professionals alerts’ and we will provide new advice in the near future. We are sorry for any misunderstanding the email has caused.”

We asked the ATO if the agency was observing Australian privacy laws when it comes to handling email addresses with outside contractors, and were told the agency and Campaign Monitor were taking privacy very seriously, including measures like this:

“The ATO conducting regular penetration testing of their systems to identify any system vulnerabilities or gaps. Campaign Monitor also conducts their own security assessments and maintains safeguards to protect the security of servers and personal information.”

Haters gonna hate. We thought we were at saturation point for Tony Abbott parody videos, but this one was surprisingly good. While Taylor Swift’s Shake It Off made it to Hansard yesterday when Mark Scott answered a question from the Nationals Senator Matthew Canavan about the Triple J Hottest 100 with “Haters gonna hate hate hate”, Swifty makes another appearance in this parody: 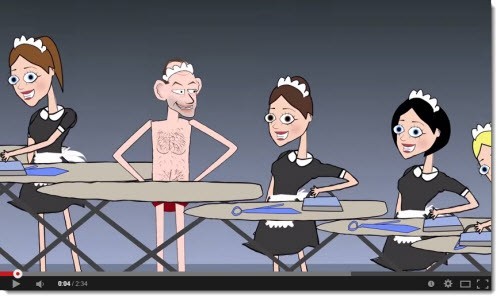 Re the KFC problem: sell it as frogs legs – “tastes so much like chicken, even KFC can’t tell the difference”