Does Media Watch have a responsibility to contact everyone host Paul Barry mentions on the program? And other media tidbits of the day.

Is Barry a critic or a journalist? Does Media Watch have a responsibility to contact everyone host Paul Barry mentions on the program?

The issue was raised in Senate estimates yesterday, when Nationals Senator Matthew Canavan asked ABC managing director Mark Scott about claims Today Tonight was not contacted before a TT story was briefly criticised on the program.

“It is also journalism too,” Canavan responded. “In my experience, good journalists come and talk to you first.”

Stokes writes down Seven Group Holdings, wins over Tax Office. As expected, Kerry Stokes’ Seven Group Holdings took hits from writing down the value of its investment in Seven West Media and its Caterpillar distribution operations in China, but received a $142 million surprise from the Australian Tax Office to help lighten the gloom.

Seven Group’s impairments to its Seven West and Caterpillar investments had been expected after Seven West last week wrote down the value of its TV licences, newspaper and magazine mastheads and licences and other smaller assets by more than $1 billion, before tax. This morning Seven Group revealed a $195 million reduction in the value of its Seven West stake, to $474.7 million, from $661.8 million. In fact, the write-down more than reversed a $127 million write-back of a previous impairment of that 35.3% stake in the first half of the 2013-14 financial year. That 35.3% stake was worth around $513 million last night at Seven West’s higher share price of $1.46, so there could be a small write-back this half.

Seven Group reported a loss of  $113 million before tax, and an after-tax profit of $69 million for the December half-year. On an underlying basis (removing all the one-off items), the company said it earned a net profit of f $118.7 million — “down 10 per cent on the prior comparative period but slightly ahead of guidance in a challenging market”.

The company says it is starting a new share buyback looking for 17.7 million (it completed a buyback of 11.9 million shares at the end of December, 2014). This buyback won’t be accepted by Kerry Stokes, so using the company’s money (and that of the 30% minorities), Stokes is going to offer them a tax effective exit, and tighten his control over the company past 70%, and support the shares in the market in what could be another ‘challenging year’ with the resources and construction sectors in Australia and China still doing it tough. An unchanged dividend of 20 cents a share will be paid, rewarding all shareholders and helping Stokes maintain his modest lifestyle.

The most interesting part of today’s statement was Seven Group’s big win over the tax man — to the tune of more than $142 million. The Notes to the Accounts explained the win: “ATO formation valuation settlement comprises the settlement of an outstanding tax objection with the Australian Taxation Office, or as the company said in its statement: “the adjustment of the tax value of the Group relating to the formation of SGH totalling $142.3 million. That win cut the value of significant items of more than $254 million (including the impairments) to just $49.5 million. That also included $62.9 million in tax benefits from the impairments of the Seven West stake and the Caterpillar assets in China.

In other words, Seven Group objected to the ATO’s estimate of the value of Seven Group Holdings for taxation purposes and scored a big win — the second media mogul to score a win over the ATO in the past three years. Rupert Murdoch was the first with a victory worth more than $800 million two years ago. — Glenn Dyer

Front page of the day. Lt General David Morrison, retiring in May, opens up to Anne Summers in a fascinating profile of how he came to realise the problem in the military. 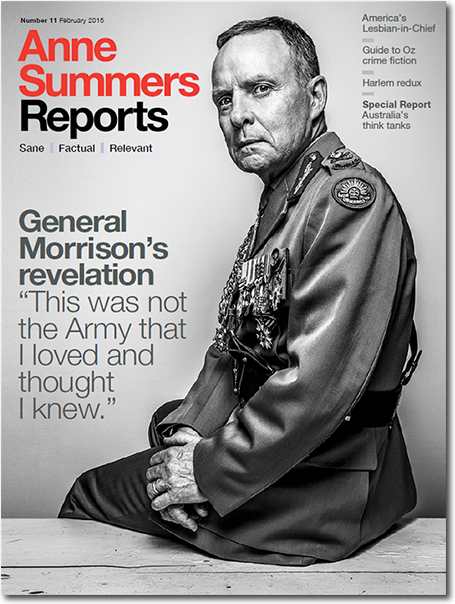