Tony Abbott is still the most talked-about pollie in Australia, but for all the wrong reasons.

Prime Minister Tony Abbott remains way ahead of anyone else in terms of coverage this week, as the government tried to keep all of the focus on further security measures aimed at stopping Australians from fighting with terrorist organisations overseas. The media was just as interested in further leaks from within the organisational wing of the Liberal Party, the Government’s attempts to remove president of the Human Rights Commission Gillian Triggs, and the very poor reception in Indonesia to comments from the PM linking executions to aid.

Queensland Premier Annastacia Palaszczuk’s first full week in the job got her into second place as Cyclone Marcia caused significant damage along the central Queensland coast, while the recently very low profile Opposition Leader Bill Shorten jumped back to third, but more owing to others dropping than a big increase in his coverage, a reflection of the recent polls which show he isn’t wowing the electorate, despite his party’s big lead.

Attorney-General George Brandis was up with the focus on security laws and the still tricky metadata debate, while Agriculture Minister Barnaby Joyce was the main government critic of labelling laws in the wake of the frozen berries hepatitis scare. 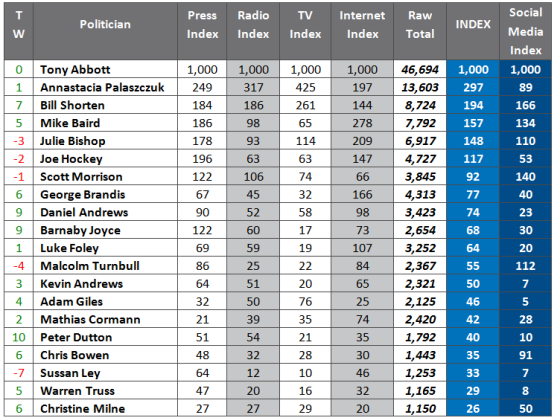 Callers are still discussing the relative merits of some alternative Liberal prime ministers, but anti-terror laws were definitely the plat du jour overall.

Tony Abbott jumped back up to 150k comments, ten time more than anyone else, mainly owing to comments about the two Australians on death row in Indonesia and criticising the proposed anti-terror laws.

Supposedly Doogie didn’t do so good as host of the Oscars, being blamed by some for a big ratings drop … or could the drop have more to do with the fact that it’s an intensely boring four hour self-obsession fest, just like every other awards night, but longer?