Send in the troops — Arnhem Land has been ‘smashed’

The Australian Defence Force was standing by to provide disaster relief in the wake of Cyclone Lam. So why weren't the troops sent in? The message from Arnhem Land Progress Association boss Alastair King was clear. Arnhem Land has been hit hard by Cyclone Lam and needs help — and fast. And the only organisation that can provide that is the Australian Defence Force.

There are more than a few of us up here who’ve wondered why the call to send in the ADF hasn’t been made before now, but it was only last evening in this piece by Megan Palin in the local NT News that the message was sent out loud and clear.

As Palin reported, King, CEO of the largest employer and source of local economic activity in dozens of small communities across the top end of the NT and Queensland, was surprised the Australian Army had not been already sent in to assist with the clean-up and restore essential services. As ALPA’s Facebook page shows, the company has dedicated substantial staff and material resources in support of the communities hardest hit by Cyclone Lam.

This morning King told The Northern Myth that: “They deployed troops into north Queensland, but I’m mystified why the territory and federal governments haven’t sent the troops in to help with the utter devastation in Arnhem Land. We have Robertson Barracks in Darwin that is full of troops on standby to do this kind of work. We have people living with no water, no power and in houses that have been smashed by fallen trees, and they need help and they need it now. The army has the resources to make a real difference, and quickly.”

There has been chatter on local social media about the possibility of the troops going into Arnhem Land to assist the devastated communities since the real impact of Cyclone Lam emerged late on Friday afternoon.

For many Tony Abbott’s visit to Darwin the next day provided an ideal opportunity for him to exercise his duties as “Prime Minister for Indigenous Affairs” and if not visit the affected communities at least meet and greet with the 430 members of the Warruwi community who had been evacuated from their homeland to Darwin.

But Abbott ignored Arnhem Land and its woes, preferring to stick to the timetable, open a new abattoir and “sweat it out” in a gym session and photo-op with ADF members at Darwin’s Larrakeyah barracks. Abbott faced lots of questions from the press about sending in the troops, but they related to his reported desire for unilateral action in Iraq against Islamic State, not sending them in to support a few thousand locals who had been bashed up by a very different kind of storm.

Later that day Peter Chandler, NT Minister for Police, Fire and Emergency Services, declared a state of emergency for the communities of Milingimbi, Ramingining, Galiwinku, Gapuwiyak and Mapuru Outstation. “I’ve taken this step to re-establish the normal pattern of life for residents and communities affected by Cyclone Lam,” Chandler said. That declaration was yesterday extended for a further three days.

On Sunday the NT government sent an assessment team, drawn from government and non-government agencies, to the affected area on an assessment mission. Chief Minister Adam Giles accompanied the team and would have heard the cries for help from locals loud and clear. As the ABC reported yesterday:

“Galiwinku resident Johnny Dhurrkay said the community was still in shock and without the basics. ‘[We’ve got] no power, no water, no anything at the moment and we’ve got money in the credit card but at the moment we can’t go out and use the EFTPOS,’ he said. Charlie Yebarrarr from Miwatj Health on Elcho Island said people who lost personal items in the storm may be suffering depression. ‘I think that true depression does not go away, they is still thinking about, for example, where can I put my car in the first place, where can I put my boat in the first place?’ he said. ‘Now it’s happened, it’s smashed.’”

NT Emergency Services sent in a 50-person team to provide assistance with clearing trees and basic restoration of homes, but by late yesterday they were reported to be exhausted from working in the hot and humid conditions and reinforcements were being called in from as far afield as Alice Springs.

These NTES volunteers do wonderful work during short-term emergencies — think flooding, car crashes, etc — but their ranks mainly consist of competent and well-meaning amateurs for whom their emergency work is a part-time effort. It may be that it is now too late for ADF personnel to be sent in to assist the thousands of Arnhem Land residents affected by Cyclone Lam’s passage through Arnhem Land, but King isn’t alone in  asking why, as happened in Queensland following Cyclone Marcia, the ADF wasn’t sent in immediately after the true scale of the damage suffered was apparent.

As King noted, the ADF has a considerable presence — and capacity — in Darwin and across the Top End. And they have been on standby for a week. All they needed was the call from the relevant NT government minister, in this case Chandler.

The ADF provides a service known as Defence Aid to the Civil Community (DACC), which is one of two forms of aid the Australian Defence Force can provide to local civilian authorities. In Darwin, where cyclones are a regular rather than rare event, local ADF personnel are placed on standby to provide DACC support once a cyclone watch is declared.

For Cyclone Lam that watch alert was issued early last week. That alert triggers an order to a local team of mixed ADF personnel — mainly drawn from members of the army’s 1st Brigade at Robertson Barracks outside Darwin but flexible enough to draw on members and resources of the RAAF and navy if needed. The request for initiation of DACC must come from local civilian administration and is made to the Senior ADF Officer in the NT (SADFONT), currently Commodore Brenton Smythe.

Once the call for DACC assistance is made the ADF can provide a wide range of support, from platoons of engineers from 5RAE and the combat engineers regiment through to helicopter and naval support. Further in-community support can be provided by NORFORCE, an Australian Army Reserve infantry unit that acts as “eyes and ears” in the north, about half of whom are local Aboriginal soldiers who live in remote communities.

NORFORCE has two squads with a presence in Arnhem Land, and members at the affected communities of Nhulunbuy, Galiwinku, Ramingining, Maningrida, Milingimbi and Goulburn Island.

NT Chief Minister Adam Giles provided the following response to a request for comment on sending the ADF into Arnhem Land.

“Our advice from the emergency services has been that it is not currently necessary to request assistance from the Army.

“However, the Department of the Chief Minister is working closely with Emergency Management Australia in regard to supporting those affected communities, specifically around emergency accommodation. Representatives from EMA are on the ground in Galiwinku this morning to undertake an urgent scoping for emergency accommodation options for those displaced residents.

“The four major communities in the cyclone path have now been assessed and technical teams have begun assessing the situation in the Marthakal and Milingimbi homelands. Waste management services and local community crews have begun operating in each of the communities to support the clean-up. 23 NTES volunteers with chainsaws flew to Galiwinku over the weekend and yesterday to assist with the clean-up of fallen tree debris. The water boil alert has now been lifted for all affected communities.

“In Galiwinku the majority of the high and low voltage power system has been restored. There will be a three hour planned outage at 1pm today to connect up remaining High Voltage links. Electricians will still be required to connect individual houses and are currently working in the community. Sewer and water services have been restored. Plumbing and electrical contractors are assisting with homes experiencing issues relating to toilets and power supply.” 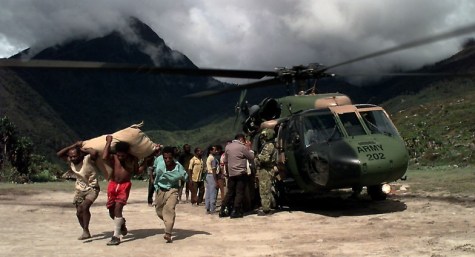 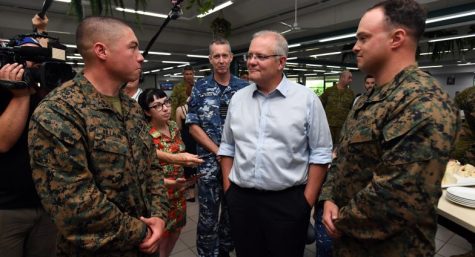 Why is the NT so attractive for US defence?

The best fun you’ll have out bush all year: the NT’s Barunga Festival