It only took hours for a front-page story in the Australian Financial Review to come crashing to the ground. And other media tidbits of the day.

Xenophon’s election to the editorship of Adelaide student newspaper On Dit is controversial to this day at Adelaide University, but didn’t involve Xenophon stuffing any ballots or any suspension. In the 1975 election, ballots were stuffed in Xenophon’s favour, but he knew nothing about it, as he wrote in On Dit in the year after his editorship when the election fraud came to light. He was never the subject of any disciplinary action by the university. The incident is detailed in this 2008 profile of Xenophon in The Australian.

Gillard’s book, released in September, was by far the best-selling political biography of the year. It sold 62,000 copies in 2014, in a year full of political biographies where the next-best-sellers were a compilation of Paul Keating quotes, The Book of Paul: the Wit and Wisdom of Paul Keating (13,200 copies) and Paul Kelly’s Triumph and Demise (over 12,700 copies). The next-best-selling book by a politician was John Howard’s The Menzies Era (12,700 copies). John Howard’s Lazarus Rising sold a staggering 100,000 copies. — Myriam Robin

Pricing The Economist. Yesterday in our Tips and Rumours section, we poked fun at The Economist‘s pricing structure, which is entirely the same across “print”, “digital”, and “print + digital” subscriptions. But several readers got in touch to tell us The Economist has actually addressed this themselves.

One reader sent us a link to this Quora discussion where The Economist‘s digital editor Tom Standage explains the pricing structure after a user complained why the digital subscription wasn’t cheaper than the print:

“You could actually argue that the digital edition should be more expensive, because it has less advertising (at the moment), so less advertising revenue is available to subsidise the cost to readers. It’s true that digital editions cost a bit less to deliver since there are no printing and distribution costs. But those costs are much more significant for a daily newspaper than a weekly magazine; for us the saving is much smaller relative to the cover price.

So, you could make the case both for digital being cheaper than print (lower delivery costs) or more expensive (less advertising). We’ve decided to price them the same. This also sends the signal that we think the digital edition is just as valuable, and just as worth paying for, as the print edition.”

The Economist has a history of interesting pricing strategies. Another reader pointed us to a 2009 TED talk by economist Dan Ariely, who described his efforts trying to figure out why the print and the print + digital packages cost the same. His theory? The addition of a useless third option which no one would ever choose helps tip readers towards picking the full-service Economist subscription. — Myriam Robin 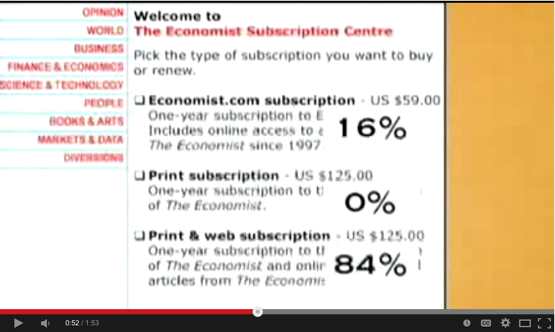 How to lose a front page story. It’s amazing how little background work the media does in these days of internet publishing pressure. Take The Australian Financial Review’s front-page “exclusive” yesterday afternoon claiming senior executives from 21st Century Fox had held talks about a possible takeover of Discovery Communications. The talks were described as nascent. An hour or two later the story crashed to earth when a spokesperson for Fox flatly denied the rumours.

The story slid all the way back to the bottom of the lead companies and markets section on page 11, with an each-way bet of a comment on page 11 by Murdoch-chronicler Neil Chenoweth, who at least got one thing right — the presence of John Malone as a major investor in Discovery.

What neither report in the AFR noticed was the presence of another big shareholder in Discovery: the wealthy privately owned Newhouse family through its Advance group, which owns 31%, has three board seats, and the same right as Malone’s companies to block any bid it doesn’t want. Last Friday’s fourth-quarter report filing with the US SEC again reveals the extensive poison pill rights of the Newhouse/Advance interests. Their stake ranges from 25% for everything bar the election of directors to 31% for the election of directors.

So if the Murdoch clan wants to buy Discovery (and it will cost at least US$20 billion compared with the current value of around US$13.4 billion) they will have to talk to Malone and the Newhouse interests, not just the management of Discovery. — Glenn Dyer

Video of the day. Forget Lady Gaga, John Legend and Common’s tribute to Martin Luther King’s struggle was the real highlight of the 2015 Oscars. Not a dry eye in the house. 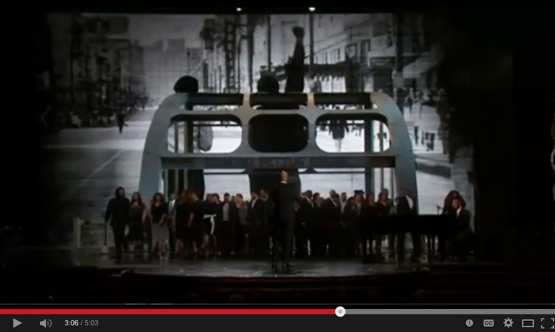 Front page of the day. National Geographic asks why so many reasonable people on both the Left and the Right now doubt the conclusions of science: 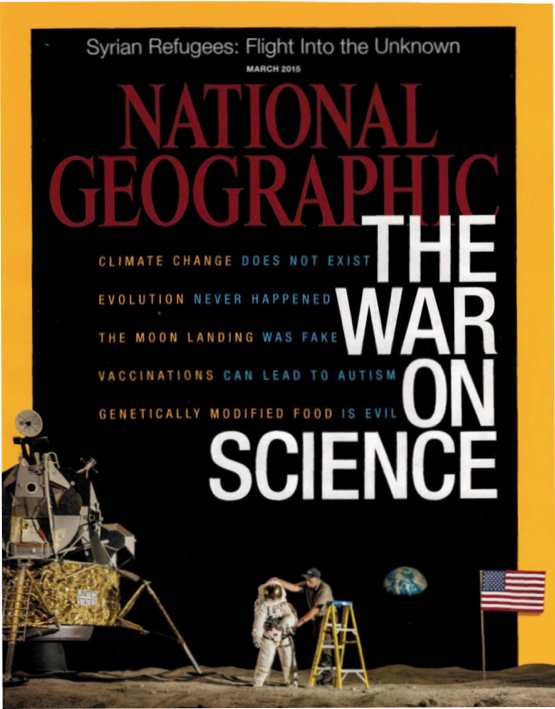 OK, I admit it. The conspiracy theorists were right…

Despite Heat and Thunder, Big Bash makes a small splash

Tks for background on The Economist pricing models Myriam but suggest you could also usefully follow up with them on reasons behind discriminatory pricing vis a vis Australian subscribers. I’ve kept up a digital subscription until recently (paper copy took too long to arrive) but after repeated access problems on my tablet (effectively ignored by the publisher) I finally gave it away.

Re National Geographic front page, I think the erroneous one out is definitely GMO which is repellent. Seriously, inserting salmon genes into strawberries and all that stuff is incredibly unethical.