Indonesia has a track record of affording clemency to its own citizens charged with drug offences, but foreigners are unlikely to get a reprieve, writes policy analyst Sarah Gill. 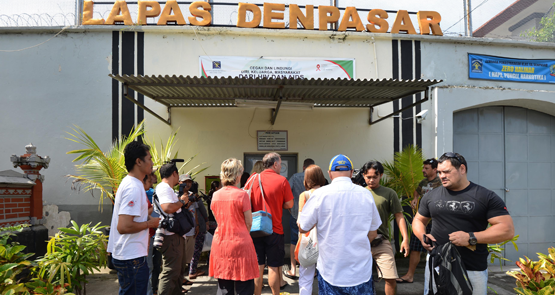 Lawyers for Australians Andrew Chan and Myuran Sukumaran will today challenge Indonesian President Joko Widodo’s rejection of their clemency requests in Indonesia’s administrative court. The hearing is likely to refocus attention on issues at the core of Indonesia’s planned executions, after Prime Minister Tony Abbott ignited a diplomatic storm last week with his comments about foreign aid. Let’s be completely clear: this is not about infringing the sovereignty of another nation; it’s not about hypocrisy (nations are invariably inconsistent when advocating for their national interests); and it’s most certainly not about “owing” anyone.

By the Indonesian government’s own admission, this is about Indonesia’s rule of law and the application of its capital punishment regime. These are matters of considerable concern to other democracies in the region, matters that should be of singular interest to Indonesia’s own citizens, and matters of life and death for Chan, Sukumaran and 55 other drug offenders on death row. But for reasons that are now becoming painfully obvious to the watching international community, it is difficult to have any confidence in Indonesia’s legal system.

Last week, Indonesian Foreign Minister Retno Marsudi stressed that executions were a “law enforcement issue” and the decision to enforce the death penalty was “not directed toward any country“. The point Marsudi is keen to impress on the international community — a rhetoric also articulated by other Indonesian officials — is that the penalty for drug trafficking offences is clear, it is applied evenly and consistently, and it is not subject to political interference.

But before the resumption of executions in January this year, a total of 25 people had been executed in Indonesia since 1999 — an average of less than two people per year. In the first months of Joko Widodo’s presidency, that number (which had, until then, been modest by global standards) increased by almost a quarter. If Jokowi presses ahead with the planned executions, Indonesia will have the dubious honour of eclipsing Yemen and Japan and joining the list of the 10 countries with the highest annual execution rates (based on 2013 data).

It’s difficult to imagine that this radical shift will pass unnoticed, particularly given the sizeable contingent of foreigners in line for execution (of the 12 prisoners that Indonesia has executed in the post-Suharto era for drug offences, 11 were foreign nationals, and seven of the eight drug offenders scheduled for the next round are also foreigners). It seems inevitable that greater scrutiny will be brought to bear on how the world’s third-largest liberal democracy implements the rule of law that, ostensibly, underpins its capital punishment apparatus.

Andrew Chan and Myuran Sukumaran were sentenced to death in February, 2006, for conspiring to smuggle 8.3 kilograms of heroin from Indonesia to Australia. In the same year, Indonesian national Hanky Gunawan was sentenced to 15 years’ imprisonment, subsequently upgraded to death, for producing and distributing large quantities of ecstasy (a materially similar offence to that of condemned French national Serge Atlaoui).

Wilson was executed on March 15, 2013, ending an unofficial moratorium on the death penalty in Indonesia. Three years before Wilson’s execution, in 2010, the Supreme Court commuted Chimezie’s death sentence to 12 years’ imprisonment on the grounds that the constitution provides an absolute right to life, which cannot be limited. The following year, Gunawan’s sentence was also overturned by the Supreme Court on the basis of his constitutional right to life, with the court also pointing to Article 4 of Indonesia’s Human Rights Law, which provides the same right.

While Chimezie’s death sentence was commuted, his co-accused, Michael Igweh, is still facing execution, as is Ghanaian national Martin Anderson, who was sentenced to death in 2004 for possession of just 50 grams of heroin. This latter case is noteworthy not just because of the quantum of narcotics involved, but because Indonesian narcotics law appears to permit a maximum term of 10 years for “illicit ownership” of narcotics. (It’s probably no coincidence that Anderson has had no appeals and no consular representation).

In explaining these apparently contradictory approaches to capital punishment sentencing, the reasoning of the Supreme Court has been inconsistent and customarily thin. The court has relied on a 2007 Constitutional Court judgment upholding the death penalty while simultaneously overlooking the accompanying recommendations that capital sentences be postponed for 10 years and commuted if “the convict displays praiseworthy conducts and behaviours”.

It has now emerged that two of the judges involved in the Bali Nine case have been found guilty of corruption and manipulation. One of the offences related to falsifying court documents to reduce Gunawan’s sentence even further, from 15 to 12 years. Another senior judge, the chairman of the judicial review panel that also looked into Chan and Sukumaran’s case, accepted payment in return for favouring a client.

Last year, the former head of Indonesia’s Constitutional Court received a life sentence for accepting over $5 million in bribes to influence rulings, and just a week ago a former lawyer for Chan and Sukumaran alleged their sentencing judges were pressured by “certain parties” to deliver the death penalty and asked for bribes in return for lighter sentences. These allegations are now before the judicial commission.

Legal analysts have struggled to explain the frustrating inconsistencies in how Indonesia applies the death penalty, but with 11 people scheduled for imminent execution and a total of 57 drug offenders on the hit list, the lack of a binding system of precedent, and appalling disparities in sentencing, are no longer just matters for academic discourse.

In 2012, then-president Susilo Bambang Yudhoyono commuted the death sentences of Indonesians Deni Setia Maharwan and Meirika Franola, convicted of attempting to smuggle three kilograms of cocaine and 3.5 kilograms of heroin out of the country in 2000. Only 10 months after receiving clemency, Franola was found to be masterminding a smuggling operation, from her prison cell, of crystal methamphetamine from India to Bandung, West Java. A drug courier used by Franola in the 2000 trafficking ring, Rani Andriani, was denied clemency and executed in January this year.

At the time the clemency requests of Deni and Franola were granted, then-deputy justice minister Denny Indrayana conceded that the main reason was the need to free Indonesian migrant workers on death row overseas; by giving the impression to other nations that Indonesia was moving away from capital punishment. Since then, while continuing to advocate for Indonesian drug traffickers on death row, Widodo has pledged a blanket ban on clemency for any drug offence, allegedly rejecting appeals unread and citing a “drug emergency“. The Bali Nine lawyers argue this contravenes a requirement to consider each case on its merits — it goes against the very principles on which clemency powers are based.

In the end, if a democratic country is to administer a justice system in a way that inspires confidence, there must be evidence that penalties are fair and applied equitably. Moreover, if states are to exact a punishment that is final and irreversible, they must strive even harder for fairness and equal treatment before the law. With Indonesia’s growing emphasis on foreign policy goals — an expanded engagement in the Indo-Pacific region and enhanced “economic diplomacy” — and the material benefits of greater influence on the world stage, it will need to carefully consider the image it wants to present to the international community. There are more than 57 lives in the firing line; the optics of these impending executions — the clear failure of justice in relation to how, and to whom, the ultimate penalties are applied — may well constrain these foreign policy goals and irretrievably tarnish Indonesia’s reputation as a country that upholds the rule of law.

Tears, anger and diplomatic posturing: how the day unfolded for Australia

Shocking statistics ignored by Mainstream media re Indonesian death penalty: 200,000 Indonesians and 16,000 Australians die each year from smoking-related causes due to Indonesian and Australian politicians ignoring the problem in the interests of tobacco pushers.

Assuming the correctness of the Indonesian Government claim, about 200,000/18,263 = 11 times more Indonesians die each year from smoking than from opiate use.

Punishment should be proportionate and one supposes that tobacco smoking -permissive Indonesian politicians should face 11 times the penalty of opiate-pushers – but when the punishment is death you can’t kill a person more than once.

The Australian Lib-Labs (the Coalition and Labor Right) are complicit in 1.2 million global opiate drug-related deaths linked to US Alliance restoration of the Taliban destroyed Afghan opium industry from 6% of world market share in 2001 to 93% in 2007, the breakdown including 200,000 Americans, 50,000 Iranians, 18,000 British, 10,000 Canadians , 8,000 Germans and 4,000 AUSTRALIANS (see “Afghan Holocaust, Afghan Genocide”: https://sites.google.com/site/afghanholocaustafghangenocide/ ).

Bali Nine ringleaders but opiate drug trade “small fry” Myuran Sukumaran, 33, and Andrew Chan, 31, should be punished but should certainly not be executed when tobacco death-dealing Indonesian and Australian politicians and opiate death-dealing US Alliance and Australian politicians are free from any Mainstream censure let alone any Mainstream reportage of their horrendous complicity.