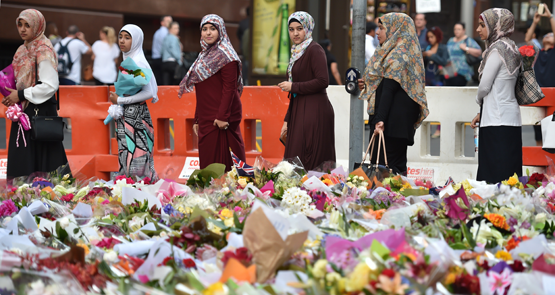 In his hardline speech on national security yesterday, Prime Minister Tony Abbott called on Muslim community leaders to voice their condemnation of terrorist actions carried out in the name of their faith. But Crikey found that, in the wake of recent terrorist attacks, Muslim leaders are never far from the headlines condemning the violence.

Abbott said in his speech:

“I’ve often heard Western leaders describe Islam as a ‘religion of peace’. I wish more Muslim leaders would say that more often, and mean it … Everybody, including Muslim community leaders, needs to speak up clearly.”

To help the PM out, here are a few examples of times when Muslim community leaders have spoken out against Islamic extremism.

On January 7 this year, two Muslim gunmen stormed the Paris office of satirical magazine Charlie Hebdo, killing 12 people. Although many agreed the magazine had carried blasphemous images of the Prophet Muhammad, Muslim leaders across the world condemned the attack.

Islamic Society of the ACT president Abdul Hakim said he was “very disappointed” the gunmen had resorted to violence to demonstrate their disapproval of the publication’s depictions of the Prophet. “We don’t endorse it, certainly, we condemn it,” he said.

“The shooters were acting above any law, with no government’s sanction. Whoever these people [the assassins] were, if they were doing it under the pretext of Islamic motivation, they’re totally wrong. You can’t do that in the first place, and to kill a person is a grave sin.

“To take the law into your own hands is definitely unacceptable and not sanctioned by any Islamic body.”

Australia’s most senior Muslim cleric, the Grand Mufti, publicly condemned the attack and the use of the Islamic flag, which Monis made hostages hold up against the windows.

Dr Ibrahim Abu Mohammed, on behalf of the Australian National Imams Council, spoke publicly to “condemn this criminal act unequivocally and reiterate that such actions are denounced in part and in whole in Islam”.

President of the Islamic Society of South Australia Waleed Alkhazrajy said his community was devastated by the incident and praying for the victims. “We are sad for the loss of life. We are sad being part of this nation for the taking of these people as hostages,” he said. “Muslims in the community spent the whole day praying … fearing for the safety of these people. We feel for each other, this pain. We are one body, we are one Australian body.”

Newcastle Muslim Association spokeswoman Diana Rah said, “These actions are not what this religion teaches us. It is a criminal act.”

“I think it’s bad he’s dead because now he can’t face the consequences. This man was already a criminal and known for other offences … I don’t know how he had been granted bail,” he said.

The Imam of the Ahmadiyya Muslim Association at Stockleigh, Ahmed Nadeem, and Secretary Ehsan Alvi also condemned the siege. Nadeem said the Muslim community stood by the country’s security agencies and supported their efforts in safeguarding its peace and security. He said in no way did Islam support such acts, and Monis had been a disturbed man who had hijacked the religion to get attention. “Islam actually teaches that to kill one person is as if you have killed the whole of humanity,” Nadeem said.

In 2014-15, Islamic State (also known as ISIS, ISIL or Daesh) broadcast a number of videos of the members of the organisation beheading foreign nationals, including US journalist James Foley.

Prominent leaders of the Australian Islamic community condemned the videos and tactics throughout numerous publications in Australia. And Australians weren’t the only ones. More than 100 of the world’s Muslim scholars wrote an open letter to IS, highlighting the Prophet’s stance on mercy for all worlds, including the saying “He who shows no mercy will not be shown mercy” and “Have mercy and you will be shown mercy”. The letter states:

“You have misinterpreted Islam into a religion of harshness, brutality, torture and murder. As elucidated, this is a great wrong and an offence to Islam, to Muslims and to the entire world.”

Leader of the Muslim Women’s Centre for Human Rights Joumanah El-Matrah said: “From the Islamic perspective, Islam does certainly not allow for the enslavement of other human beings, much less the selling of them.”

The Australian National Imams Council released a statement after Australian teenager Abdullah Elmir left Australia to join IS: “We condemn in the strongest possible terms any threat against Australians … It is utterly deplorable for violent extremists to use Islam as a cover for their crimes and atrocities.”

The ANIC also said, “Since the ISIS group was established we have been very clear about denouncing their lies”, adding that the militants had misappropriated the term “Islamic State” for their own political goals.

In September 2014, 18-year old Abdul Numan Haider was shot dead after he stabbed two anti-terrorism officers at Endeavour Hills police station, in Melbourne’s south-east. Haider was under investigation as a person of interest and was asked to go into the station to answer some questions of his recent activities. After arriving in Australia 10 years ago, Haider joined a radical Islamic group called Al-Furqan.

In response to the attack, local members of Islamic communities spoke out in support of the government’s anti-terrorism laws. Khaluf Salim, a community worker at Ethnic Council of Shepparton and District, said, ‘‘in my opinion, ISIS are not real Muslims’’.

‘‘They are using the name for impact, they know nothing of Islam. There have been 2 million refugees in the last six months because of the actions of ISIS.”

Muslim residents of Toowoomba called a community meeting after the reports of the attack. The event was organised by Islamic Interfaith and Multicultural Committee of Toowoomba and the University of Southern Queensland’s Multi-Faith Services.

During the meeting, members of the Muslim and non-Muslim communities came together to promote peace and inform the public on the events happening in Iraq and Syria. University lecturer Dr Shahab Abdullah represents 55 families in Toowoomba’s Iraqi community and delivered a speech focused on educating community members about the Islamic faith:

“Most of the Islamic Religious Councils and many Muslims leaders have reiterated that the acts of ISIS tarnish the Islamic faith and image of Muslims in general. No symbol or slogan not even the writing of the two testimonies of the Islamic faith can justify acts of terror and extremism. These people are terrorists.”

Against my better judgement I watched Hockey on Network TEN’S The Project last night; his response to the lengthy list of Islamic organisations which had strongly condemned radicalism was “There can always be more.” With debate at that dumbo level what hope do the moderates have?

What particularly annoys me is, when shown instances of such denouncement, it’s then dismissed as Taqqiya – the practice of deception.

In short, no evidence is sufficient for those who are committed.

Rabbott just repeated what Obama was saying the day before. I think I will change his name to Parrot…

Islam is an ideology rather than a religion. We should be free to question an ideology in a free and democratic society. That the press erroneously labels anyone who questions an ideology that preaches segregation, suppresses women, opposes democracy and condones violence against the LGTB community as racist shows how far we have lost our way. The West is weak, as can be demonstrated by the apologists.

Have you not comprehended this yet? Obviously not from this article. The Qur’an has over 100 verses where it extolls Jihad against the infidels. Even moderate, secular Muslims will tell you that Islam is coming…it’s just a matter of when.